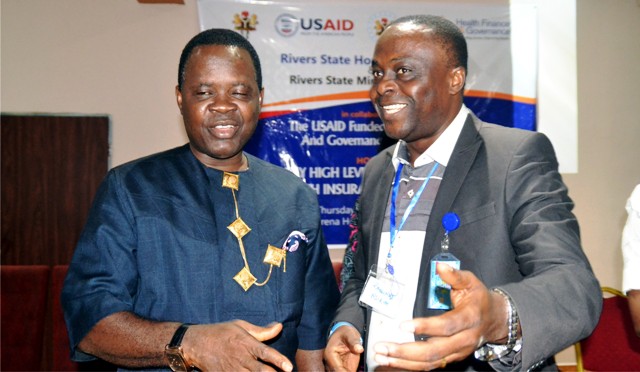 Rivers State Deputy Governor Dr (Mrs) Ipalibo Harry Banigo says the Governor Wike-led administration is in a hurry to bring the dividends of democracy to the door steps of the Rivers people.
Banigo stated this during the opening ceremony of the 14th Annual National Conference, 2018, of Nigerian Institution of Surveyors, Women in Surveying at the Rivers State House of Assembly Auditorium, in Port Harcourt last Tuesday.
“Since the assumption of office, the Rivers State Government led by Nyesom Ezenwo Wike has practically turned the State into a massive construction site,” she stressed.
According to the Deputy Governor, surveyors have a significant role to play in the development of sustainable societies, stressing that the need to ensure that development does not have detrimental effect on surrounding environment is more compelling now than ever.
She said as change managers, surveyors should promote networking with governments, private sector, industry, science, research, education and NGOs, noting that improved collaboration among stakeholders is necessary to create a platform for the required synergy for effective policy and management of such disasters.
“Disaster constitutes one of the greatest threats to development and socio- economic well being of the people and is particularly hard on the less privileged.” Banigo said.
Banigo, who implored professional women to stand out as mentors and role models for young girls and women to believe that with hard work and diligence they can succeed in their chosen career, commended the Rivers State Chapter of Women-In- Surveying for their support for the “Protect the Girl Child Initiative” of the Office of the Deputy Governor.
In his remarks, the Minister of State, Power, Works & Housing, Surv. Suleiman Hassan Zarma, said in the quest to provide critical infrastructure for the use of mankind in the environment, surveyors must look at what services they can offer to save the environment.
The State Commissioner for Environment, Prof. Rosaline Konya, presented the keynote address on the theme: “The Surveyors, the Policies, the State and the Environment: Synergy To Mitigate Environmental Disasters”.
Also speaking, the Chairman of the occasion, Surv. Charlesye Charles who expressed the need for the people to preserve the environment for our children informed the visitors that contrary to some false media reports, Rivers State is safe and urged the visitors to spread the good news.