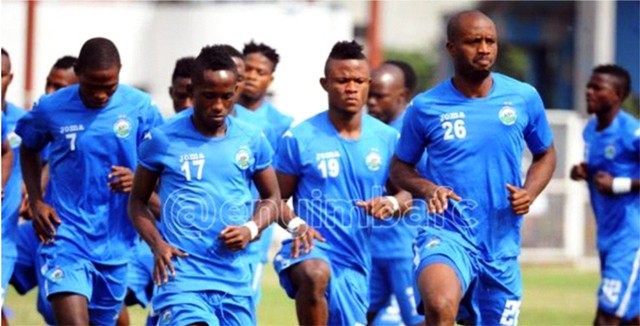 Amid pomp and glitz, but with a full appreciation of the task at hand, leaders of the South West zone of Nigerian Football last Friday, in Ibadan, launched the Western Nigerian Football Forum, and in the process unveiled the logos for both the forum and the fulcrum, the Odua Football Leagues.
NFF President Amaju Pinnick, physically present at the occasion, lauded both the concept and the work so far done, saying the move was in the right direction and challenged the other zones to emulate and create a healthy competition for which Nigerian football will be the ultimate beneficiary.
“I am not surprised because the South West has always blazed the trail in several respects. When we were growing up, the name of this place, Cocoa House rang very loud and it was the dream of every Nigerian to visit here. You have shown a clear vision by choosing this place to be the headquarters.
“Football is about continuity; I pray that successive administrations in the South West will support and encourage this project. There is nothing wrong in this concept; it is only full of positives, including bringing football closer to the people and engendering a surplus of talents. It is the same reason why in Africa, we have the different zones and they have their own calendars and competitions,” said Pinnick, who is also Vice President of WAFU B.
NFF 1st Vice President Seyi Akinwunmi, who is Coordinator of the forum, explained that the Odua Football Leagues would have U15, U17 and U20 categories at the youth level, with the U23 sector being the Premier League to which the youth teams will aspire.
Akinwunmi revealed that the idea was conceptualised at a meeting of the South West forum in Abeokuta in 2015, while commending the support that the concept has received from the Ooni of Ife, Oba Adeyeye Enitan Ogunwusi (who has donated a trophy for the Premier League) and some other leaders in the zone. He called on the political, royal and corporate leaders of the zone to support the project.
Pinnick then unveiled the logos and identity of the forum and the leagues, saying the concept was capable of fast –tracking the development of Nigerian Football into a full–blown industry capable of employing and sustaining the youth, a position shared by the Chairman of the Development Agenda for Western Nigeria (DAWN), Mr. Seye Oyeleye.
Both Oyeleye and Hon. Fatai Adesina Salau, Oyo State Commissioner for Liaison and Special Duties, foresee a situation whereby the Odua Football Leagues will curtain social vices by positively and productively engaging the youth and reducing unemployment in the entire South West, while at the same time building a large and useful pool of talented footballers that will take Nigerian football to even higher heights of glory.
Pinnick insisted that youth football is the future of Nigerian Football and after taking a look around the new offices of the WNFF on the 15th floor of the iconic building, promised to support the furnishing of the secretariat.

Nigerian Heroes Of The Winter Olympics