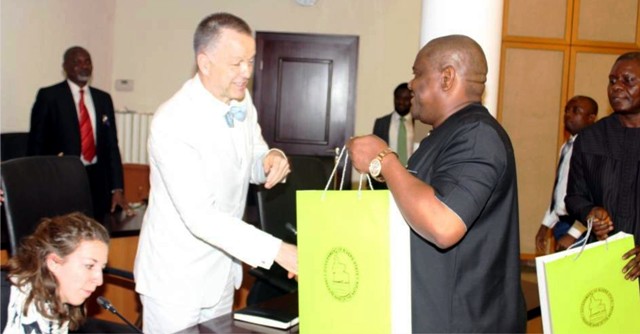 The Nigerian National Petroleum Corporation (NNPC) said it spent about 5.8 billion dollars to import Premium Motor Spirit (PMS) popularly known as petrol to combat fuel crisis that resurfaced since late last year.
In a statement signed by Mr Ndu Ughamadu, the Group General Manager, Group Public Affairs unit in Abuja, yesterday, it said the PMS was equivalent of 9.8 million metric tons.
According to the statement, the Group Managing Director of the corporation, Dr. Maikant iBaru, disclosed this during a public hearing by the Senate Committee on Public Accounts at the National Assembly in Abuja.
Represented by the Chief Operating Officer, Finance and Accounts, Mr. AbdulrazaqIsiaka, he said that the corporation carried out the massive importation in fulfilment of its statutory role of supplier of last resort.
This, he said was to ensure that Nigerians do not suffer as a result of product unavailability. The GMD in the statement noted the corporation’s provision of 9.8 million metric tons of petrol so far had helped a great deal in ameliorating the suffering of Nigerians.
He said the corporation’s intervention became necessary following the inability of the major and independent marketers to import the product.
He pointed out that cross-border smuggling due to price disparity between Nigeria and neighbouring countries as well as logistic issues in trucking products to different locations across the country remained serious challenges in the quest for fuel queue-free situation in the country.
The Chairman, Senate Committee on Public Accounts, Senator Matthew Uroghide noted that the public hearing was a part of the Committee’s duty to find lasting solutions to the problem of fuel scarcity in order to make life easy for all Nigerians.
Meanwhile, the Senate, yesterday, mandated its Committee on Public Accounts to investigate the rationale behind a security account allegedly operated by the Nigeria National Petroleum Corporation (NNPC) and Nigerian Agip Oil Company (NAOC).
This followed the adoption of a motion moved by Sen. Dino Melaye (Kogi-APC).
Moving the motion, Melaye said there was the need for the Senate to unravel the objective of the account and source of its funding.
He alleged that the account opened with the name NNPC/AGIP Oil Company IPP Security Account with address NNPC Garki, Harbert Macauley way, is domiciled in First Bank Nigeria Plc with account number 2006367288.
Melaye alleged that the account had an opening balance of N31.7billion and a closing balance of N34.5billion as at April 25, 2017, adding that there were lodgements and withdrawals since January, 2017.
“A lot of questions are begging for answers as regards this account.
“While we need to know the objectives of this account, we also need to know the signatories to the account; is the account known to the Federal Government and what are the sources of the account’s funding?
“About N2trillion is kept in various accounts of government, we are operating a Treasury Single Account yet money is kept in various personal accounts.
“If these monies are properly remitted to government purse, we will have no business borrowing.
“This Senate will continue to expose any corrupt practice in the country because it is time to protect the future of Nigerians unborn,” Melaye said.
The committee has four weeks within which to carry out its investigation.
Meanwhile, the ad-hoc committee set up by the House of Representatives, yesterday, commenced investigations into the incessant killings in Nigeria.
Addressing journalists on their approach, Chairman of the committee, Rep Pally Iriase (PDP, Edo) said the committee of seven lawmakers was going to be bi-partisan in their approach.
He said “We formally commenced our investigations today and we will use a three prong approach via interaction with security chiefs, interface with foreign partners and conduct public hearing.”

The Nigeria Liquefied Natural Gas (NLNG) has expressed worry over a recent resolution of the Senate directing it to pay N18.4billion compensation for acquisition of right of way (RoW) across some communities.
In a statement in Port Harcourt, the company, said, it was evaluating the resolution and the circumstances surrounding it.
The statement read, “The attention of Nigeria LNG Limited (NLNG) has been drawn to a resolution said to have been passed by the Senate, following the consideration of a report by its Committee on Ethics, Privileges and Public Petitions, sequel to a petition relating to compensation for the acquisition of a Right of Way across some communities.
“NLNG is evaluating the resolution and circumstances surrounding it.
“NLNG wishes to state that it has always conducted its business responsibly and in accordance with the laws of the Federal Republic of Nigeria, including in this specific matter”.

The Christian Association of Nigeria (CAN), yesterday, raised concerns over the increasing hardship being experienced daily by Nigerians.
This was the outcome of the meeting, held in Kaduna, presided by the Chairman of Northern CAN, Rev. Dr. Yakubu Pam, to discuss the various issues affecting Nigerians, including hardship and unemployment.
Other issues discussed include the mass poverty and hunger among millions of Nigeria; the 2023 general elections; insecurity; and the prolonged strike by the Academic Staff Union of Universities (ASUU) and the Federal Government.
In a statement issued at the end of their meeting in Kaduna, signed by CAN Chairman, and Secretary of the 19 Northern states and Abuja, Reverend Yakubu Pam and Sunday Oibi, respectively, said many families can barely get one meal in a day, adding that there was no denying the fact that there is poverty and hunger in the land.
He said Nigeria’s weak economy has thrown millions into abject poverty and hunger while life is becoming a living hell as people struggle to make ends meet.
The statement said almost daily, prices of food and essential items are on the increase, adding that the reality on the ground is evident for all to see.
“Poverty and hunger affect all spheres of life. It fuels criminality and crime; it affects education; it affects quality healthcare.
“Hunger affects citizens’ political choices. Already those who mismanaged the economy are using hunger as a weapon as the 2023 general election approaches”,he said.
The group called on governments at all levels to address the problem of poverty and hunger in Nigeria.
It also called on Nigerians to ensure that the 2023 elections are conducted under a peaceful atmosphere without rancour, adding that an election is not war.
“No politician is worth dying for. No one should take the laws into his or her hands”.
He tasked the Independent National Electoral Commission (INEC), to ensure that the elections are free, fair and credible.