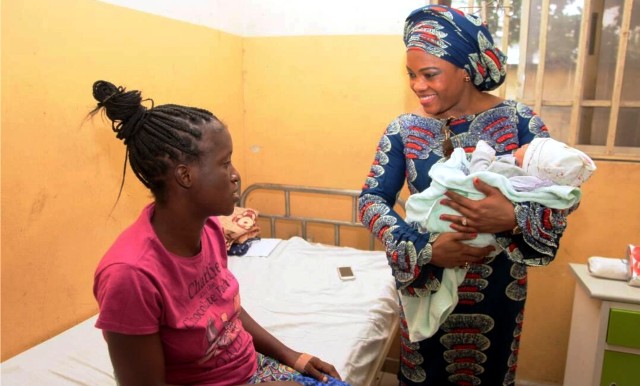 Wife of the Rivers State Governor, Justice Eberechi Suzzette Nyesom-Wike has declared that God will establish Rivers State for the best in 2018.
The State Governor’s wife also stated that the people of the state should look forward to a fruitful and rewarding  year.
Speaking after her visit to New Year Babies at the Braithwaite Memorial Specialist Hospital and Police Medical Clinic in Port Harcourt last Monday, Justice Nyesom-Wike said 2018 will be a year of jubilation.
The wife of the Rivers State Governor visited Baby Precious Nweke at the Braithwaite Memorial Specialist Hospital and Baby Olotoruwa  Oluwatosin  at the Police Medical Clinic.
She said: “His Excellency, Governor Wike has described the year 2018 as our year of jubilation.  Rivers State is going to be jubilant this  year. The jubilation  will be more than that of last year.
“We are looking forward to a very fruitful year. This is a year that God will establish  Rivers State for the best.  It will get better in years to come”.
She advised Rivers children to respect their parents, as this is a Biblical commandment  that comes with blessings.
“When children  obey their parents in the Lord, they will reap the good of the land. They will enjoy God’s blessings. Rivers children should focus on their studies and use their opportunities”, she said.
While urging parents to embrace the education  of their children, the Wife of the Rivers State Governor noted that with education, Rivers children will continue  to be outstanding.
On the New Year Babies, Justice Eberechi Suzzette Nyesom-Wike said, she led top government officials and wives of commissioners  to show them love.
She further said the New Year Babies were Rivers children despitey the state of origin of their parents.
Mother of Baby Precious Nweke, Mrs Mary Nweke prayed God  to bless the Wife of the Rivers State Governor for being a caring mother.
Also speaking, the mother of Baby Oluwatosin, Mrs Oluwatosin  Ajisogbon thanked her for extending love to them. 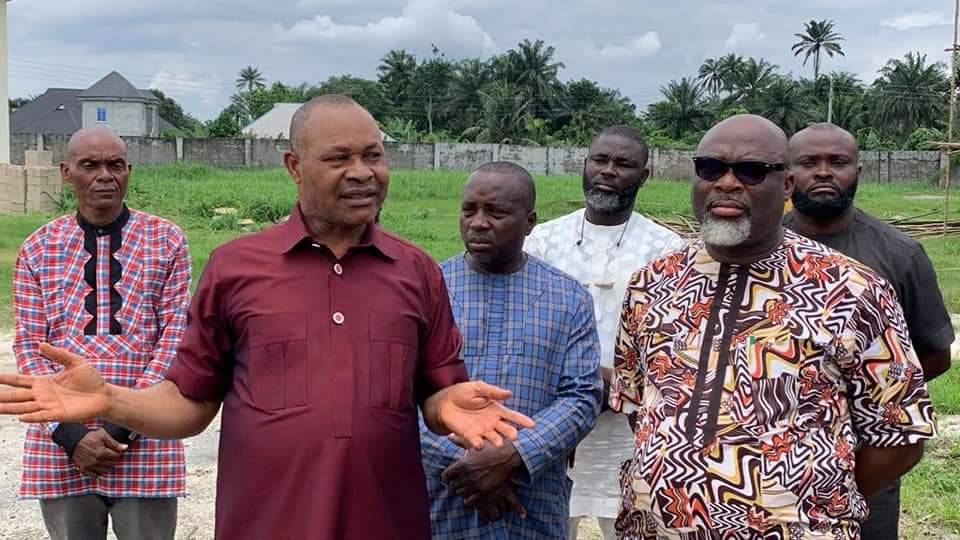 The Auditor General of Local Governments in Rivers State, Mr Bema Friday, says he is impressed with the achievements of Emohua Local Government Council under the watch of Dr. Chidi Lloyd, describing as unprecedented the array of infrastructural projects executed by the Chairman within the past one year.
Mr. Friday stated this when he led a team of auditors to Emohua Local Government Area on a ‘Value For Money Audit Exercise’ on the programmes and activities of the council.
He said the value for money audit is a credible and professional exercise organised to ascertain the effectiveness and efficiency of the application of public funds by local government council administrations in Rivers State, with a view to promoting accountability and effective service delivery in the third tier of government.
Acknowledging the improvement in local government administration in Rivers State under the present dispensation, the Auditor General commended Governor Nyesom Wike for building a system that promotes effective service delivery, stressing that the present crop of council chairmen were able to change the narrative about local government administration in Rivers State because of the State Governor’s penchant for service delivery.
The Chairman of Emohua Local govyernment Area, Dr. Chidi Lloyd, who conducted the Auditor General and his team round the project sites across the LGA, said he was very happy to receive the team of auditors because his administration had left visible footprints within the past one year.
The council boss attributed the achievements of his administration to the non-interference of Governor Nyesom Wike-led Rivers State Government into funds accruing to local governments in the state from the federal allocation.
Dr. Lloyd said his administration is not indebted to any financial institution or individual, stressing that the infrastructural revolution witnessed across Emohua LGA under his administration was occassioned by his deliberate effort to reposition the LGA, to stand out in the comity of LGAs not only in Rivers State but across Nigeria.
The Auditor General and his team joined the council Chairman to the recently commissioned 1 kilometer Evekwu road, the Elele-Alimini magistrate court complex, and the Emohua local government vigilante services secretariat building, for an evidence-based investigation of the already in use projects, all conceived and completed by the administration of Dr. Chidi Lloyd within one year.
The council Chairman also took his visitors round Emohua local government council secretariat for an on-the-spot assessment of the ongoing transformation of the council secretariat as conceptualized by his administration.
Already completed and commissioned projects visited within the council secretariat include the local government primary healthcare center, the council chapel and marriage registry, the 20,000 litres braithwaite water reticulation project, the Titan Trust Bank ATM Gallery, council convenience, the council canteen and the electrification of the council headquarters.
Ongoing projects sites visited include the Emohua local government council secretariat (administrative building), the local government legislative council complex, the 350 capacity ICT studio, the 500 seater pavilion, the council office complex, the fencing and security tower building at the police divisional headquarters and court complex in Rumuji town, the one kilometer Ubimini road, 1 kilometer Chief Nyesom Wike Drive and Akpabu braithwaite water reticulation project in Akpabu Community.
Meanwhile, Dr. Chidi Lloyd has disclosed his administration’s readiness to complete the 1.5 kilometer Ukeli road project in Rundele before the end of August.
He said the contractor handling the project is expected to commence surface preparation for asphalt laying on the road in the coming days, to deliver the road ahead of the 2nd phase of project commissioning in the area.
Other projects earmarked for completion ahead of the next phase of project commissioning include the council administrative building, Chief Emeka Woke ICT Studio and the Chief Nyesom Wike Drive.
The council chairman was accompanied by the Vice Chairman of Emohua LGA, Hon Mrs Edna Nyeche, the head of local government administration, Mr Ben Taol, and other principal officers of the council.

The Shell Petroleum Development Company (SPDC) has signed a contract to acquire drones to monitor its pipelines and wellheads in the Niger Delta.
SPDC’s General Manager, External Relations, Mr Igo Weli, made this known at a news conference in Port Harcourt.
He said the company decided to acquire drones due to frequent attacks on its pipelines, leading to huge revenue losses from activities of oil thieves and pipeline vandals.
According to him, the oil thieves punctured SPDC pipelines and wellheads, and thereafter, redirected crude oil to their illegal refining sites, thus denying the company needed revenue.
“To this end, we have signed a contract, and soon we will start using drones to monitor our pipelines, wellheads and other facilities.
“Shell does so much to protect its assets in Nigeria,” he said.
Weli said frequent attacks on its oil and gas facilities by organised criminals had worsened over the years, resulting in the company spending huge funds to protect its facilities.
“Some of the other extraordinary things we do as a company is flying helicopters daily to check the pipelines that come at a huge cost to the company.
“Even when we see illegal refineries, we cannot do much other than draw the attention of the authorities to it.
“The SPDC builds cages and installs technology to protect its wellheads – just like we put burglary proof in our homes to ward off robbers.
“This is worrisome and should be of concern to everyone, understanding that oil and gas is where the country generates huge forex and creates employment for millions,” he added.
The SPDC General Manager said the company was also collaborating with security agencies through the sharing of data on the locations and activities of illegal bunkers and refining sites.
He said the sharing of data was done to ensure the menace was decisively tackled, to improve the business and working environment.
Weli said governments at both state and Federal levels had been doing their best to address the menace but that more needed to be done to end the menace.
“This is why we have been talking about this over the years, and went as far as opening a website on oil spillage in 2011.”
On the reopening of Trans Niger Pipeline shutdown by the company in March, Weli said the company would only reopen the pipeline when the facility is secured from attacks.

A combined team of anti- riot police operatives of the Rivers State Police Command have arrested four Policemen at Cedar Wood Estate , SARS Road in Obio/Akpor Local Government Area for alleged involvement in land grabbing and collection of illegal levy from land developers in the area.
The arrested police officers were accused of fraudulent practices and collaborating with thugs and dispossessing rightful owners of the estate of their buildings and properties before they were arrested on the orders of the State Commissioner of Police last Wednesday .
Our correspondent who monitored the incident disclosed that police officers numbering 60 conveyed in 15 patrol vans drawn from different tactical units of the command raided a building where the policemen normally camped inside the estate, and after the raid , four officers and a Hilux vehicle were taken away by the men of tactical unit who came for the arrest.
Speaking to our reporter, a resident of the area who did not want his name in print disclosed that the arrest was sequel to series of petitions by residents of the area to the Commissioner of Police, CP Eboka Friday and the Inspector General of Police, IGP Usman Alkali Baba on the illegal activities being perpetrated by the alleged policemen and thugs who worked with them.
He explained that their modus operandi was that ” officers and their collaborators, thugs normally come to site where land owners are developing their land, asked them to pay money ranging from N100,000, and if the person refused to pay, the land developer will be beaten up and his/her fence brought down.”
Another resident also to our correspondent that in some cases, the Officers and their thugs take over the property of the landlord and sell them to another person and decried the sufferings they have gone through the hands of the officers even as
thanked the Commissioner of Police for the arrest of the officers .
When contacted ,the spokesperson for the Rivers State Police command, DSP Grace Iringe _Koko she was yet to be briefed on the matter.