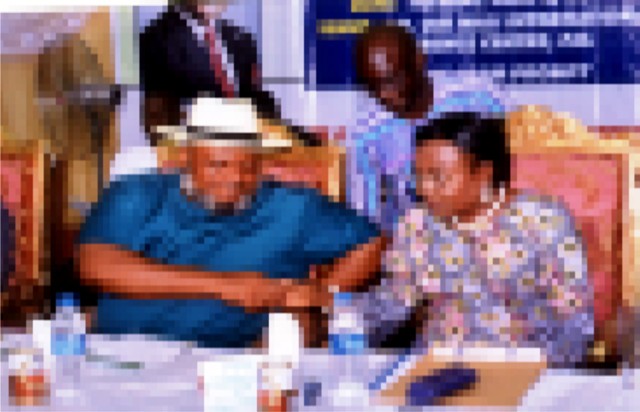 Our Environment, Our
Heritage: Environmental Sustainability: A Right For All.” That was the theme of the Port Harcourt Environmental Summit held this year. The summit was organised by the Rivers State House of Assembly Committee on Environment in collaboration with the executive arm of the government.
The conference theme was a summation of the policy thrust of the present administration in the environment sector. It would be recalled that before the inception of the present administration, major streets and roads in Port Harcourt city and its environs were littered with garbage Aside from the issue of garbage across the streets and roads of Port Harcourt and its environs, several creeks crisscrossing the city were blocked with debris.
This situation was largely responsible for the series of flood disasters which affected parts of Port Harcourt and its environs last year. It would be noted that in the year under review, the administration initiated series of programmes to return Port Harcourt to its Garden City status.
The monthly environmental sanitation exercise which was abandoned by previous administrations was reviewed and made more active.
The exercise has not only instilled the culture of cleanliness among residents of the state, but has also restored Port Harcourt to its Garden City status.
Moreover, Governor Nyesom Wike has also ensured that the monthly environmental sanitation exercise is not held only in the state capital, but also across the state.
It would be recalled that through the effort of the present administration, the heaps of refuse which litter virtually all parts of Oyigbo Local Government Area were cleared. The area was declared as the dirtiest local government council in the state.
The present administration in the out-gone year embarked on series of road constructions and rehabilitations across the city of Port Harcourt and the 23 local government areas, thereby improving the aesthetic condition of not only Port Harcourt and its environs but headquarters of the 23 local government areas.
In the year under review, the administration embarked on series of sensitisation campaigns in market places and strategic locations against some bad environmental practices such as, the indiscriminate dumping of refuse into gutters and drainages.
The burning of tyres, the indiscriminate pasting of posters on walls in the city and its environs as well as the illegal oil bunkering which was acknowledged to be a major contributor to the black soot incident witnessed across the state were also tackled. The state government took proactive measures to check the incidence of the black soot.
A taskforce on the black soot was constituted by the government to unravel the causes of the phenomenon and proffer solutions.
The taskforce made up of the Commissioner for Environment, Prof (Mrs) Roseline Konya, immediate past Commissioner for Information/Communications, Dr Austin Tam George and the immediate past Commissioner for Special Duties, Government House now Commissioner for Special Duties, Emeka I. Onowu, immediately swung into action, thereby checking the effects of the soot on the people.
The government also embarked on the dredging of the Ntawogba creek of which work was on-going at the time of filing the report.
The Tide also learnt that in the year under review, the government embarked on tree planting campaigns across the state.
The Ministry of Environment embarked on series of litigations against multinational companies for violating the environmental laws and regulations of the state, while series of conflicts between the companies and their host communities were resolved. Sources within the Ministry of Environment also informed The Tide that the series of flood awareness campaigns carried out by the ministry led to the intervention of the state government in the flood ravaged Eneka community.
Also in the year under review, the government, through the Ministry of Environment issued a stop work order against dredging companies along the Woji bridge while regular dredging inspection exercises have been embarked upon by the ministry within the period under review.
The government, through the Ministries of Special Duties and Environment also donated relief materials to persons affected by the flood incident especially those in the Eneka axis of the city.
Governor Wike has also shown his concern for the implementation of the United Nations Environment Programme (UNEP) Report on the clean-up of Ogoniland, through series of actions.
The state government was not only involved in the flag off of the clean-up by Vice President Yemi Osibanjo but has at various fora harped on the need for the Federal Government to expedite work on the clean-up exercise.
The Nigerian Environmental Society (NES) also held its annual scientific conference in Port Harcourt in which the state government was fully represented.
Reviewing the out-gone year in a telephone interview with The Tide, the state Commissioner for Environment, Prof. (Mrs) Roseline Konya said that the year had been very challenging as people were not obeying environmental laws of the state.
Konya said that despite this challenge, the government has done well in the area of flood control, the black soot and general environmental cleanliness. She said that for the new year, the administration would improve on sanitation exercise, build more public conveniences across the state as well as complete the scrap- to- wealth project at Kira in Tai Local Government Area.
Similarly, an Environmentalist, Prince William Chinwo, described the out-gone year as one that has seen landmarks in environmental activities.
Prince Chinwo told The Tide in an interview that the ongoing dredging of the Ntawogba creek was a major achievement by the administration in its bid to rid the city of incessant flooding .
He also commended the administration for the series of campaigns against the dumping of refuse into gutters and stressed the need for the situation to be sustained in the new year.
Several environmentalists also commended the government for its effort in tackling environmental challenges in the out-gone year.
This is why the efforts must be sustained to ensure a cleaner environment for Rivers people in the new year.

Oil Spill: Farm Lands, Others Under Threat At Bodo

Farm lands and other properties in Bodo City, Gokana Local Government Area are under threat following the continuous flow of oil from a ruptured pipeline allegedly owned by one of the multinational companies.
A community source informed The Tide that the spillage which occured last week in the area had continued to threatened both farm lands and aquatic lives.
According to the source, the spill has continued to flow from the pipeline, thereby posing a serious threat to the inhabitants of the community and their source of livelihood.
Speaking in a telephone interview with The Tide from the community, the Chairman, of Bodo council of Chiefs, James Boridoma Tete said the spillage is destroying farm lands in the community.
Chief Tete said the community could not ascertain the cause of the spillage.
“ I can confirm that the oil is spilling with a speed,” he said.
He stressed the need for a joint visit between the community and the company which owns the pipeline with a view to ascertaining the cause and ensure that it does not affect the people.
“ I think joint investigation visit should be carried out immediately to avert unpleasant consequences that this situation can cause to the community inhabitants.
Chief Tete also said that if noting is done on the situation urgently, all farmlands in the area will be devastated.
“There is need to put this thing under control before more harms are done to our people.
“As am talking to you now, farm lands are being destroyed by the oil which is rushing out of the ruptured pipeline with a speed”, he said.
Chief Tete also urged the people to remain calm as the chiefs council is leaving no stone unturned to ensure that spill is contained.

The Minister of Water Resources, Mr Suleiman Adamu, has called for co-operation among Nigeria’s water, energy and food security sectors towards addressing all challenges hindering socio-economic development.
Adamu made the call at the opening of a three-day Inter-Sectoral Policy National Dialogue on “the Nexus of Water -Energy-Food Security” in Abuja.
The workshop was organised by the Niger Basin Authority (NBA) and German International Cooperation (GiZ).
He said mismanagement of one sector could affect the viability of other sectors and compromise the livelihoods of the people and the ecosystem.
Adamu, represented by the Director, Water Quality and Sanitation, Mr Emmanuel Awe said the nexus approach reflected the interlink between Water, Energy, Food Security and Environment.
He expressed the need to integrate all sectors towards promoting positive impact, socio -economic development and management of resources.
Adamu said increasing activities due to urbanisation, agriculture and industrialisation, had resulted in the pollution of fresh water with serious adverse effects on health and wellbeing.
While expressing the Federal Government’s gratitude to the NBA and experts, he urged all participants to show more commitment for effective and efficient implementation of all NBA projects and programmes.
Regional Coordinator, Nexus GIZ and EU, Robert Kronefield and NBA representative, Bamidele Olatunji, said the workshop would strengthen stakeholders’ capacity in planning, policy development and implementation of the NEXUS approach.
The Tide source recalls that the first phase of the NBA and German Cooperation (NBA-GIZ) NEXUS Project (2016-2020) placed strong emphasis on regional integration of the NEXUS approach and capacity building.
The NEXUS project takes an integrated view of the water, energy and agriculture sectors, as these are all competing for the same scarce resources.
It allows an optimal balance of interests in the use of resources, manage conflicts and human rights risks appropriately, and respect the limits of the planet’s ecological resilience.

‘Why WASH Facilities Are Not Working In Rural Communities’

A Water Sanitation and Hygiene (WASH) specialist, Prof. Sunday Iboro Sunday has blamed the non functioning of some WASH facilities in rural communities in the state on lack of proper maintenance.
Sunday said this at a recent WASH event organised by the Rivers State Rural Water Supply and sanitation Agency (RUWASSA) in Port Harcourt.
He said the situation has underscored the need for the authorities to build the capacities of the rural dwellers towards maintenance of WASH facilities in their areas.
Prof Sunday who is of Theme Global, a consultancy firm said the firm is interested in the areas of capacity development.
“Don’t forget it doesn’t stop about just putting water resources facilities, there is a soft component which is capacity building.
“We are here to look at the Local Government what do they have, we started with WASH, what is the component of WASH, what do they have on ground” he said.
The WASH specialist said his firm is accessing the various local government councils in the state to see if they have the capacities to maintain WASH facilities sited in their areas.
“We are interested in capacity building to look at the gap why they are not like that, because you will soon see when we start rolling out the result.
“Rivers State, I can tell you now that over 50 percent of facilities we have are not even working”, he said.
He said effort will also be made to see if the problem is from the people or the qualities of WASH facilities in the affected areas.
“That will form some of the discussion we are going to discuss. We are looking in terms of what is it the technology that is faulty? Is it the people”? he said.
He commended RUWASSA for the programme, stressing that it will help stakeholders to come up with the best possible ways of ensuring proper maintenance of WASH facilities in the rural areas.