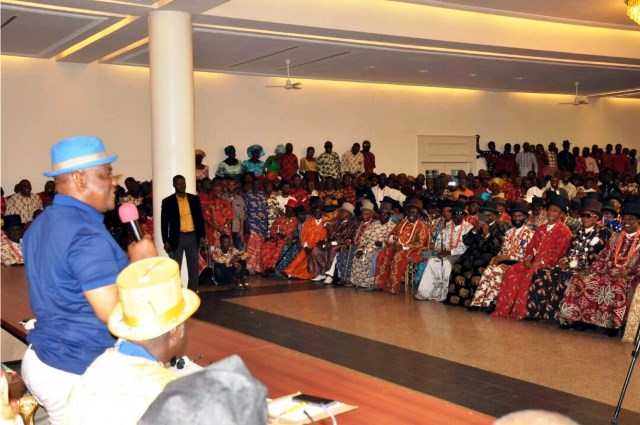 Rivers State Governor, Nyesom Wike has stated that Rivers APC leaders only gain recognition from the Federal Government when they rain insults on him.
Wike who stated this when he received some APC decampees from Opobo/Nkoro Local Government Area at Government House, Port Harcourt last Saturday, said apart from insulting him on the pages of newspapers and on electronic media, they have no political value in the state.
According to him, “The only way they get recognition from the Federal Government is by insulting Wike. Apart from that, they are finished politically.
“They must tell Rivers people what they have attracted to the state. After two and half years, they are unable to attract any project”.
He added that the Director General of NIMASA and Minister of Transportation have nothing to show to Rivers people except their capacity to insult Wike.
Wike disclosed that his administration has used projects to silence critics, pointing out that more projects will continue in 2018.
He said that with the level of projects delivery in Rivers State, it will be difficult for anyone to rig elections in the state.
“If you attenpt to rig elections here, then you rig your life. You can’t rig election  and go free. It is not possible.  You want to steal somebody’s vote, anything you see, take it. Robbery is robbery. Instead of using resources to execute projects, they are keeping  the money  to bribe the military and the police for rigging”, he said.
The governor wondered why the APC-led Federal Government is unable to organise a peaceful and credible election.
He announced that the State will hold her local government election in 2018.
On the defection, Governor Wike commended the APC decampees and assured them that they will enjoy equal opportunities with existing PDP members.
Rivers State PDP Chairman, Bro Felix Obuah welcomed the APC defectors, noting that they would contribute  to more victories of the PDP in the state.
Also speaking, Senator Adewari Pepple said that the defection is due to the outstanding performance of Governor Wike which attracted the APC Members.
Responding, Arthur Jaja, Chairman of APC Caucus in Opobo-Nkoro Local Government Area said the qualities of Governor Wike convinced them on the need to defect.
He said their defection signals the death of APC in the Local Government Area.
Also speaking, President, Vanguard of Opobo Nation (VON) said that the defection marks a new dawn in the politics of the area.