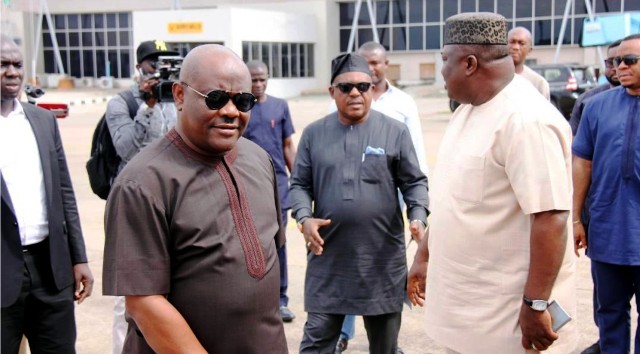 In its determined efforts to take a stand and demand more committed action in the fight against pneumonia, Society for Health Enlightenment Initiative (SO-HEALTHI), a Non-Governmental Organization (NGO), took its enlightenment and advocacy campaign to IkotOffiongAmbai in Akpabuyo Local Government Area.
The event which held at Saint Peter’s Primary School, Ikot Offiong Ambai, to mark the World Pneumonia Day, saw a contingent of six selected primary schools take part in lecture sessions on pneumonia awareness by experts from the SOHEALTHI Team, climaxing with a spelling competition where winners were given pneumonia-crested exercise books and cash prizes.
At the end of the spelling competition, Amicable Ebrigor Offu and Martha Joseph Aya, both of St. Peter’s Primary School, Ikot Offiong Ambai, emerged joint best performing students, scoring 100 percent, Godsfavour Okon Eyo and Abigail Godwin Anthony, also of St. Peter’s Primary School, came second, scoring 90% apiece, while Victoria Asuquo Okon of St. Peter’s Primary School and Wendy Edet Ekpo of Jehovah Shalom Primary School, clinched third position, scoring 80percent respectively.
In her remarks, the Founder and Team Lead of the NGO, Mrs Rosemary Archibong, stated that SOHEALTHI, founded in 2006, was saddled with the responsibility of creating awareness and advocating for a pneumonia-free world in accordance with this year’s Theme: ‘Keep the Promise; Stop Pneumonia Now.’
Mrs Archibong noted that, according to global indices, the disease sickens 155 million children under five years and kills 1.6 million each year, it has become pertinent to bring this health crisis to public’s attention, encourage policy makers and grassroot organizers alike to combat the disease.

The Executive Chairman, Cross River State Universal Basic Education Board, Dr Stephen Odey has enjoined staff of the board to complement Governor Ben Ayade’s efforts in the basic education sub-sector by supporting him to realise his lofty programmes for the State.
He made this known in a meeting to mark his three years in office as Executive Chairman of SUBEB.  Dr Odey said in spite of the financial status of the State, Governor Ayade had made remarkable impact across sectors in the State, especially in the Basic Education sub-sector.
According to Dr Odey, “he is a young man that has a lot of energy, and with ambitious plans for the state, but he is being frustrated by lack of funds”.
Speaking on the achievements recorded in the basic education sub-sector, he thanked Governor Ayade and staff of SUBEB for their support, adding that these feats could not have been achieved without the support of the Governor and hard work of Staff.
He urged staff to remain committed to their responsibilities, stating that “hard work, dedication and loyalty pays in the long run.”
Speaking earlier, the Director of Administration, Emmanuel Ojong, commended Dr Odey for the giant strides recorded in the board within this short time in Office.
He recalled the massive infrastructural developments in schools across the State, and the sanitisation of SUBEB work force to eliminate ghost workers and track down staff without requisite teaching qualifications. Ojong also poured encomiums on the Board Chairman for placing staff welfare at the forefront of his administration.

Ahead of the 2019 general election, the Resident Electoral Commissioner (REC) in Akwa Ibom State, Mr Mike Igini has disclosed that no fewer than 22 polling booths have been discovered in the homes of politicians and other private residences in the state.
Speaking in an interview in Uyo, the state capital, Igini explained that “the polling booths are not illegal, but are located at improper places”, adding that such polling booths had been relocated to public places where voters can easily access.
“We have relocated such polling booths to proper places where the people can have access to them. Elections will hold in Akwa Ibom State and votes will count,” Igini assured, even as he warned desperate politicians against hate speeches that could inflame the polity.
He said he was on a mission to Akwa Ibom to conduct free, fair, credible and transparent exercise in line with the relevant sections of the Electoral Act and enjoined eligible voters, party agents and other stakeholders to join hands with INEC to deliver hitch-free polls which outcome would not be disputed.