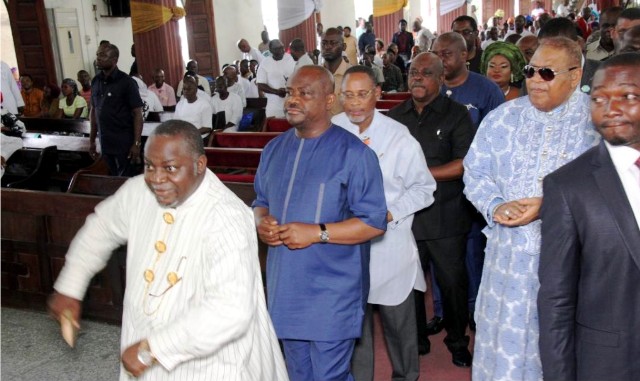 The wave of defection currently hitting the All Progressives Congress (APC) in Rivers State has swept Ward 11 in Egbema, Ogba/Egbema/Ndoni Local Government Area (ONELGA) as the Ward Chairman, Mr. Sheriff Onyenwibeya, his vice, Kingsley Obiye and scores of other members have left the party to join the ruling Peoples Democratic Party (PDP).
The handover ceremony which held at Egbema Community Primary School field, Okwuzi last Saturday, was graced by chieftains of the PDP in ONELGA including the State Chairman of the PDP, Bro. Felix Obuah who arrived the venue with his entourage.  Also present were traditional rulers and opinion leaders of Egbema community.
Speaking while presenting the decampees to Obuah, leader of the defectors and former Ward 11 Chairman of APC, Sheriff Onyenwibeya thanked the leadership and members of the PDP for the warm welcome accorded them.
“We were deceived into believing that APC would change our lives for the better. They fed us with tissues of lies and promised to turn Nigeria to another Dubai and Japan.
“APC leaders in ONELGA operate only from Port Harcourt and never return home to know how we are faring.  All we got in the end was regrets and disappointment.  APC is a failed political party. We are worse off in APC than we were then in the PDP”, he lamented.
The decampees who later surrendered their brooms and the APC flag, laid the materials on the ground, threaded ‘angrily’ on them before setting them ablaze.
The State PDP Chairman, Bro. Felix Obuah while receiving the decampees, assured that the party would give equal opportunity to all of those who have decided to join the PDP.
He stated that the success of the PDP in the State lies in its policy of sincerity, openness and generosity, adding that prejudice does not exist in the PDP.
Obuah said the party thrives on transparency and does not treat members as old or new, stressing that the PDP umbrella was large enough to accommodate all members who pledge their loyalty to the party and State.
He congratulated the leader of the decampees, , Sheriff Onyenwibeya, his deputy, Kingsley Obiye and their numerous supporters over what he described as a bold and courageous decision to quit a failed political party, the APC.
He noted that Governor Wike had stretched project execution to all nooks and crannies in the  State, and had awarded the renovation of Okwuzi General Hospital.
Earlier, the former APC Ward 11 chairman, Mr. Sheriff Onyenwibeya, had apologized to the State PDP for working against them, saying that they were deceived.
He appealed to Obuah to re-admit them into PDP, saying that they were former members of the party before APC leaders deceived and lured them.
Onyenwibeya expressed: “I want to apologize on behalf of the teeming crowd of APC members in Ward 11. We were deceived to abandon our home (PDP) to join them.
“Now, we have realised that we were deceived. We are sorry, we have realised our mistake. We have realised that PDP is the party on ground in this area. We have gone back to our land, our home, PDP. We are appealing to PDP family to please receive us”, he appealed.

EU, UNICEF To Phase Out Pier Latrines In N’Delta

Group Harps On Use Of Dialect In Child Upbringing