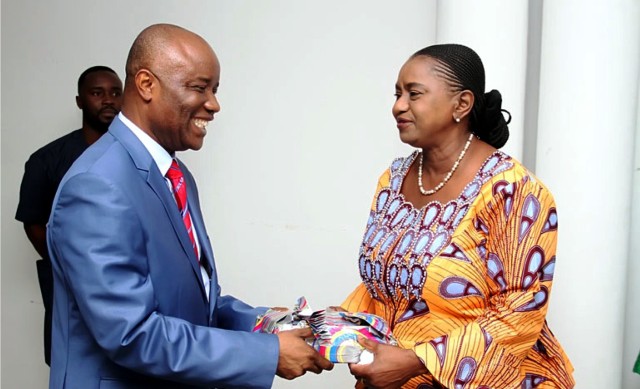 Hundreds of residents of Rumuowa community, Eneka in Obio/Akpor Local Government Area, Rivers State have been rendered homeless following the total takeover of the community by flood waters.
Some of them interviewed told The Tide correspondent Saturday,that they can no longer access their homes due to the high level of flood water in the community.
They called on the Rivers State Governor, Chief Nyesom Wike to come to their aid by addressing the perennial flooding in the community.
They further said they were dying as a result of the menace this year and attributed it to the failure of the company that constructed the Eneka Rukpokwu road to construct drainage.
.They appealed to the Rivers State government, the National Emergency Maintenance Agency (NEMA) and other agencies to come to their assistance.
According to a resident, Chizy Opara, “I can’t access my building, it is really pathetic; this thing started sometimes in 2015 when I packed to this place in that year’s September  and that was the peak of the rainy season, but there was no flood, until after the construction of the Eneka, Rukpokwu Road, the drainage that the construction company did was not properly channelled. They just did the drainage and channelled it to this place which is not proper. This time around it is worse as we no longer know where it is coming from. We need the government to get back the contractor to come and do the needful.”
On his part, the Rumuowa Youth President, Chimenem Worlu said the flood has crippled economic activities in the area, as many businesses, markets and investors have vacated the area to other places.
“Indeed residents have passed through mess, lot of businesses and people have vacated from their houses just about three days ago, we nearly recorded loss of lives of a pregnant woman and a baby as a result of the flood. The people are really suffering, hotels, markets have shut down; people have suffered more than enough and this is not what the community can do, it is what the state government can do”, Worlu lamented.
Also the Chairman, Community Development Committee, Eneka, Charles Nworgu attributed the flood in Rumuowa to the failure of the contractor that constructed the Eneka-Rukpokwu Road to make provision for drainage in the area.
“Last year, we cried and begged for the government to assist us because they are the only people that can help us redeem this mess. You can see for yourself this is the power station and nothing is happening here because it is completely flooded. This road links the Eneka Igwuruta road.
“If you go to the front there you will see mansions, good buildings, but they are completely flooded, no way to pass. So we are begging the state government under the leadership of our project Governor, Chief Nyesom Wike to come to our aid,” he added.