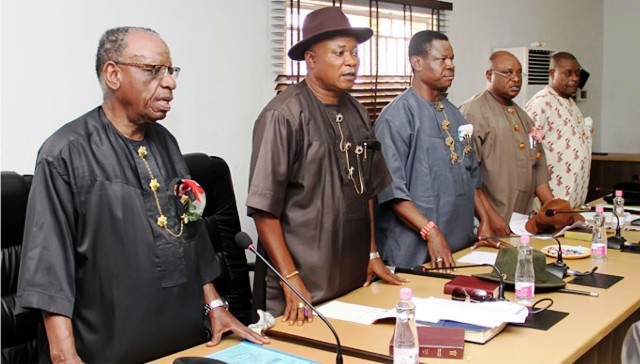 One of the founding members of the Ijaw Youth Council (IYC) and leader of the defunct Niger Delta Volunteer Force (NDVF), Alhaji Asari Dokubo  has said that any constitutional amendment in the National Assembly without resource control as a bench-mark would still threaten Nigeria’s unity.
Asari Dokubo said this at a one-day “Youth Enlightenment Workshop” organized by the office of Deputy President, Ijaw Youth Council (IYC), Comrade Telema Polyn, in Port Harcourt, last Saturday.
According to him, Nigeria’s unity can only be guaranteed, if the nation is restructured to enable component units to control their resources while they pay taxes to the centre.
He said resource control would also end various calls for secession by different ethnic groups in the country.
The ex-Niger Delta agitator warned members of the National Assembly, especially those from the North and South-West of the country against politics of ethnicity and self interests, saying that such would not engender the much-needed unity, equity and justice the country desperately needs.
Asari, who declined being a member of any political party, said enough is enough for political parties which use the name of Niger Delta people for campaign while the people languish in penury and dearth of infrastructure.
Asari also blamed governors of the states in the region for the continued neglect of the Niger Delta in terms of development.
He said the region would have been decorated with new infrastructure development projects if all the money accruing to the region, including excess crude funds, were judiciously used for development purposes.
The IYC leader charged youth, particularly those from Ijaw nation to shun illegal bunkering and pipeline vandalism, saying that illegal bunkering business has compounded the hardship of the people of the Niger Delta, whose farmlands and aquatic lives have been destroyed.
“I beg you, my brothers and sisters to shun illegal bunkering business and pipeline vandalization in our region.
“The business is illegal and the worse is that it contributes to more hardship to our fishermen and women.
“Our major occupation, especially the Ijaw people is fishing, and this illegal bunkering business is gradually destroying our rivers and creeks, with no fish, no firewood, our flora and fauna gone and the people’s health under serious threat”, Asari noted.
Asari thanked Comrade Telema Polyn for his vision to enlighten the youth of the Ijaw nation on the dangers associated with illegal crude oil refining, and appealed to the IYC new leadership to articulate programmes that would better the lives of the youth.
Earlier, the Deputy President of IYC, Comrade Telema Polyn, had said the workshop was organized to sensitize the youth on better ways to conduct their affairs in the region.
He said the event was part of the grand finale of the IYC nation-wide elections, designed to thank leaders and members of the group who supported the new executive to emerge some months ago,.
The highlights of the event include, honorary award to the Patron of the IYC, Jasper Jumbo, interactive session with the youth, cultural displays, and lectures.