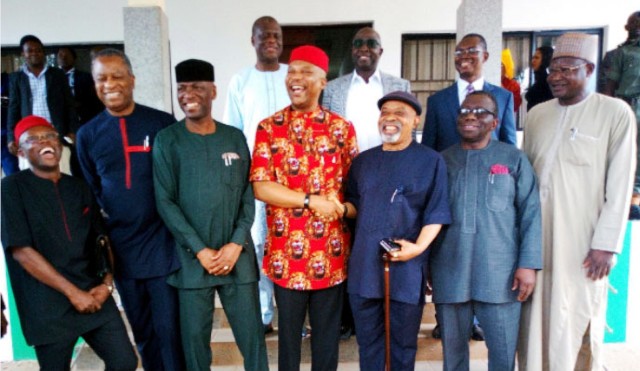 The Enugu State Executive Committee (SEC) of the Peoples Democratic Party (PDP), has   unanimously endorsed Governor Ifeanyi Ugwuanyi, for a second term in  office.
The SEC, which is the highest decision making organ of the party before the State Congress also approved September 9 and 16, 2017 for the conduct of the Ward and Local Government Primaries of the Party respectively to elect candidates for the November 4, 2017 Council  area Elections in the state to be organized by the Enugu State Independent Electoral Commission (ENSIEC).
Rising from its meeting which was attended by Governor Ugwuanyi, members of the National Assembly (NASS) from the state, Board of Trustees, national, state and zonal party executives, local government party chairmen, among others , the party in a communique stated that the decision to endorse  Ugwuanyi for 2nd term in office was, “because of his outstanding achievements and commitment to peace and participatory democracy”.
It hinted, “The activities for the Primaries commenced yesterday, August 15, 2017 with the sale of Expression of Interest and Nomination Forms at the Party Secretariat and will  end on Friday, August 25”.
The Party also passed a vote of confidence in Governor Ugwuanyi, “for his sterling performance in office and visionary leadership in piloting the affairs of the state, especially in this period of economic recession”.
It “pledged the unalloyed support of the Party leadership at all levels in the state for the Governor and his administration’s people-oriented programmes and grassroots development initiatives, which have entrenched peace and good governance as well as impacted positively on the lives of the people of the State”
“The meeting of the State Executive Committee of our great party, the Peoples Democratic Party (PDP), Enugu State Chapter, was held, Tuesday, August 8, 2017 at the Party Secretariat at G.R.A, Enugu.
“The meeting deliberated extensively on issues concerning the growth and development of the party in the state.