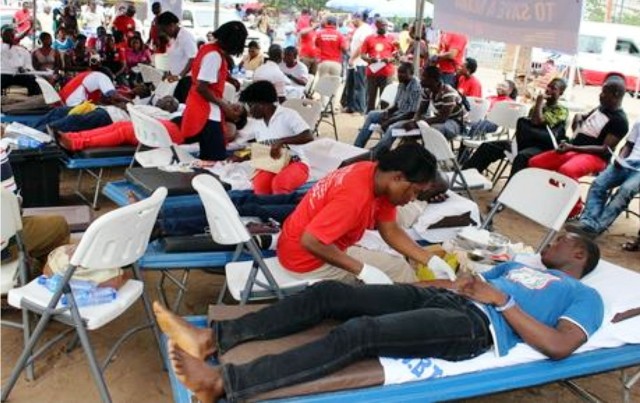 A former Minister of Health, Professor Onyebuchi Chukwu, once expressed concerns about what he described as poor attitude of the public to blood donation in Nigeria.
The learned professor noted that the poor attitude had resulted in inadequate annual blood volume collected in the country.
According to him, 1,130,000 units of blood were collected annually through various types of donations as against 1,336,000 estimates of blood units needed by Nigerians to survive.
He said the shortage had also resulted in numerous preventable deaths, especially among women, children and people living with certain diseases that required blood donations to remain alive.
“In Nigeria, we are currently faced with a situation whereby 60 percent of all blood donations are from commercial donors, 30 percent from family replacement and only 10  percent are from voluntary donors,” he said.
Blood transfusions save lives and improve health, but many patients requiring a transfusion do not have timely access to safe blood
According to the World Health Organisation (WHO), based on a sample of 1,000 people, the blood donation rate per 1,000 is 32.1 donations in high income countries, 14.9 donations in upper middle income countries and 4.6 donations in low income countries.
The WHO maintains that providing safe and adequate blood should be an integral part of every country’s national health care policy and infrastructure.
Given this development, stakeholders in the health sector agree that there should be a pragmatic approach to sensitising the public to the need for voluntary blood donation.
They observe that the United Nations’ annually declared World Blood Donor Day on June 14, should be a good platform for such advocacy.
According to them, for effective campaign, the WHO, in collaboration with International Society of Blood Transfusion, should highlight stories from people whose lives have been saved through blood donations.
For them, such campaigns will encourage regular blood donors to continue giving blood and motivate people in good health who have never given blood to begin to do so.
They insist that the increasing need for blood globally requires everyone to contribute by donating blood and motivating others for the cause.
In the same vein, a private medical practitioner, Dr. Uriah Obiora, backs voluntary blood donations in Nigeria and said that it was indispensable to life-saving health care services.
He says blood is important to survival. He compares the donation of money or food to blood and concludes that blood is more important because its absence is equivalent to death.
“Blood is key to survival; when you donate money you give food, but when you donate blood you give life; absence of blood is equivalent to death,” he said.
He emphasises that Nigerians should be sensitised on the importance of voluntary blood donations to ensure comprehensive life-saving health care services.
A laboratory scientist who works in City Diagnostic Centre in Port Harcourt, Mr. Amina Dappa, calls on health workers to have the right attitude by encouraging more Nigerians to participate in voluntary blood donations
“Their attitude depends on how you relate to them and what things you say to them. We have a blood donor group who are clinical psychologists and their mandate is to sensitise Nigerians to the importance of blood donations.
“When you donate blood, your bone marrow comes alive and gives you fresher, cleaner and newer blood,” he said.
Making further comments on the benefits of blood donations, Dappa says that regular blood donations help to balance iron levels in the body, especially in males.
According to him, it helps the body to prevent excessive iron build-up which can result in oxidative stress and organ damage. This oxidative damage is one of the major causes of heart attacks, strokes and accelerated ageing.
He assures the public that Nigeria has good equipment to screen blood and insists that blood donations and its transfusion are safe.
Corroborating Dappa’s claim, a Port Harcourt-based nurse/midwife, Mrs Violet Green, notes that blood is not administered on patients without proper screening. She says blood is always screened for HIV, Hepatitis B and C virus and syphilis.
According to her, every authentic health institution ensures proper screening of all blood units and intended blood donors to prevent possible transmission of infection as mandated by WHO.
“We make sure that the temperature of the blood is maintained from the point when it is collected so that it is viable for use.
“We have blood bank refrigerator, specifically meant to store blood which is maintained within specific temperature,” she stated.
Similarly, a laboratory scientist, Comfort Brown, expresses concern about Nigerians’ attitude to blood donation, observing that they, more often than not, wait until there is accident or emergency situations before coming to donate blood.
She says that there are some major surgeries that require blood and the health institutions where the surgeries take place must always have blood in its blood bank.
She insists that lack of public awareness on voluntary blood donation, among others, were parts of the causes of depleted blood bank in hospitals and clinics.
Some concerned Nigerians have also noted that it is essential that everyone should support the campaign on voluntary blood donation in the country.
They observe that since blood is vital in every area of medicine and human existence, its availability is required at every point in time when it is needed across the country.
Also, they urge the mass media to carry out continuous campaigns on the need for safe blood donations to save lives and encourage both state and federal governments to establish more blood banks in their health facilities. This, according to them, would spur the people, who would become aware through the media, to access same for safe blood donations.

Can the social media space be regulated in a manner that it will give young people the opportunity to unleash positive energy on the society without stifling their voices? Experts say it is possible. Youths constitute the bulk of those who use the social media space for interactions, empowerment and self-actualization. They have leveraged advancements in information and communication technology as a medium of communication.

Among the leading social media in Nigeria are Twitter, Facebook and Instagram. While youths may have limited political power to champion their views they can harness the potential in the social media to promote peace in Nigeria. Although the social media has its own negative sides, it also comes with numerous advantages, such as facilitating access to mentorship, socialization and creativity.

Through its networking mechanisms, social media spreads news faster  and has wider reach than the conventional media. It encourages group participation in discussions and activities thereby providing a platform to push critical information and nurture ideas. Youths can take advantage of this uniqueness to propagate positive atmospheres such as peace and nation building.

While many young people have used social media to create wealth, education and sourcing information and entertainment, many have used it to propagate violence conducts and other social vices. Experts say the Federal Government has a role to play in re-channeling youths’ social media culture and orientation from the negative to the positive through proper regulation. The federal government is cognisant of this as demonstrated by the Minister of Information, Alhaji Lai Mohammed.

The former vice-chancellor said that social media platforms should be used to facilitate virtual dialogues among stakeholders towards achieving peace and security. “The youth’s use and adoption of social media should be aimed at promoting peaceful coexistence among various ethnic groups. “Through social media, the Nigerian youth should build strong consensus on issues that affect their lives and wellbeing. “No meaningful socioeconomic and human development can take place in a nation where its youth are preoccupied with sharing divisive and inciting rhetoric on social media,” the don said. Prof. Eghosa Osaghae, the Director-General, Nigerian Institute of International Affairs (NIIA), underscored the need to directly engage the youth on peace building. “One of the ways that we can push these kinds of conversations concretely, going forward, would be to invite the youth to be part of this kind of debate,” he said.

According to him, the Nigerian policy paper defines the youth as someone who is between the age of 15-30, which means he or she is under custody and not yet autonomous. “I will however extend that definition to mean that the youth is a social category, so a youth is he or she that a particular person says he or she is, notwithstanding age. “So if you have a consciousness of being young or old, that’s who you are. There are people who are 40 but they already feel they are old, so let it be with them that they are old”, he said.

Prof. Oyeronke Olademo, Director, Centre for Peace and Strategic Studies. University of Ilorin, urged adults to use social media platforms to counter the negative narratives about youths and the country. “For me, curbing the excesses of the youth on social media and redirecting them to peace building, requires that older persons should flood the cyber space with positive narratives. “This will overwhelm any negative narratives or fake news, which the youth may spread on these platforms,” she said.

Experts say while it is important to regulate the social media space caution should be applied in doing so to avoid gagging the media, infringing on free speech and fundamental human rights.