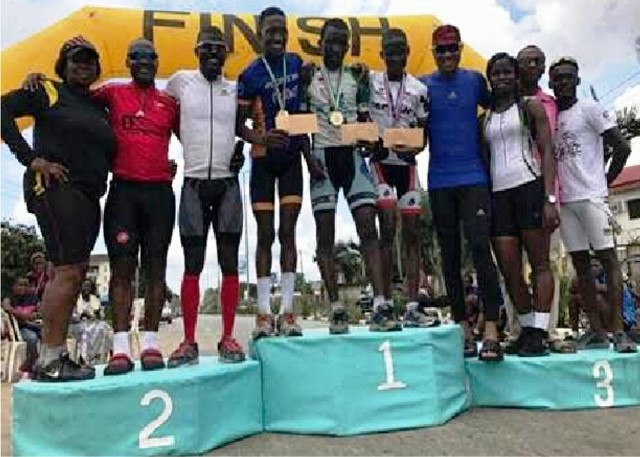 In a bid to discover hidden talents in cycling in Rivers State, the State Cycling Association, in conjunction with Lifestyle Cycling Club, Port Harcourt, on Saturday organised Easter Holiday Sprint Duathlon Junior Championship.
Speaking at the occasion, one of the national cycling coaches, Miebaka Aggo, who is also one of the organisers of the competition said the purpose of the championship was to keep Rivers State cyclists fit and ready for any competition that would come either national or international.
According to him, this is the way talents are been discovered in any sports by training them at tender age.
“Today we have four categories in this championship. They are: Under 5, 10, 14 and 18.
The meaning of Duathlon is for an athlete to run some kilometers and also ride some kilometers. In fact this is one of the most difficult aspects of cycling because it required a lot of energy.” Aggo said.
Miebaka Aggo, who is also an athlete and coach in the State and life style club explained that the greatest challenge facing cyclists in the State was lack of sponsorship to attend competitions within and outside the country.
“What we are doing here today is to train and discover future Olympian because the junior athletes are already breaking records,” he stated.
Aggo, the only ‘Iron man’ in Nigeria in cycling used the forum to appeal to multinationals to assist the cycling association in all ramification, mostly when they have competitions outside the country.
At the end of the championship, Ibitamuno Miebaka Aggo emerged winner in the under five category, as Chisom Ovua clinched the first position in U-10 male category, leaving Anthony Philip and David Klaibi to occupy the second and third position respectively.
In female category U-10 Martha Aggo came first, while Thelma Donaldson came second; while in the U-14 category male, Isaac Dana, emerged winner, Emperor Philip and John Ekong came second and third respectively.
Gideon Ekina, won the U-18 male category, Bright Emmanuel came second and Abdulmalik Yusuf occupied third position, while Alice Alaibi emerged winner in the female category, as Elizabeth Jacob and Oruma Wachukwu came second and third respectively.