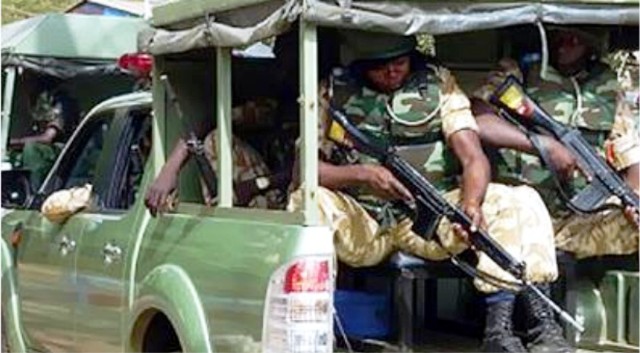 Two soldiers attached to the Joint Military Force (JTF) in the Niger Delta, Operation Delta Safe, died in a gun duel with sea pirates last Wednesday, an official has confirmed.

The soldiers were part of a team dispatched in response to a distress call on an attack by pirates operating in Southern Ijaw Local Government Area of Bayelsa, Spokesman for JTF, Maj. Abubakar Abdulahi, confirmed, yesterday.

He described the incident as sad but added that efforts were on to bring the perpetrators to book.

“Effort is on-going by the JTF to track and apprehend the criminals,” Abubakar said.

He said that no arrest was made as the operators fled before the troops got to the site.

The attack on the military is coming barely 72 hours after last Tuesday’s attacks on a police check point and a patrol team of the Nigeria Security and Civil Defence Corps (NSCDC)  along the Kolo Creek area of Bayelsa State.

The suspected armed bandits had killed one NSCDC operative, and cart away some riffles belonging to the men of the police force in the twin attacks.

Meanwhile, the Bayelsa State Commissioner of Police, Asuquo Amba, has met with heads of other sister security agencies in the state, to brainstorm on ways to create new synergy to prevent crime in the state.

Speaking at the meeting, Amba called on the sister security outfits to work as a team to reduce crime and  consolidate on the gains so far recorded in the state.

He also appealed to the sister agencies to complement one another in the course of policing the state.

He noted that through effective synergy among the security organisations, crime rate has decreased in the state.

He lauded the security chiefs for sustaining peace and unity in the state, and called for greater cooperation to secure the state.