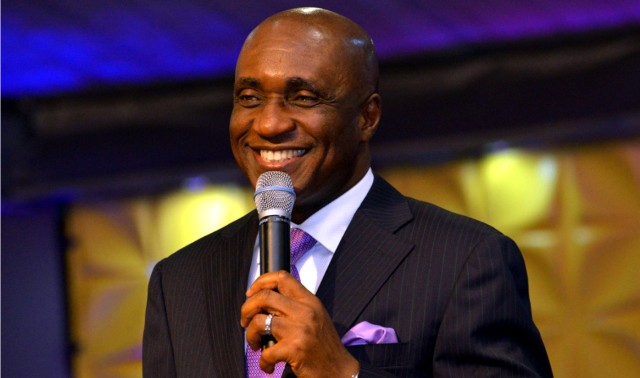 Mobilising Citizens For Sustainable Democracy In Nigeria: The Power Of Editors (II)

Mobilising Citizens For Sustainable Democracy In Nigeria: The Power Of Editors (I)

USA has also advanced drone technology with the capacity to go to war and shoot from self-driven drones and kill decisively without risking any human life in the field. Recently this technology was used to exterminate an Iranian General considered a huge security threat to the United States.
These discoveries underline the importance of education in National Development.
According to UNICEF, one in every five of the World’s out of school children is in Nigeria. Even though primary education is officially free and compulsory, about 10.5 million of Nigeria’s children aged 5 – 14 years are out of school.
In 1970 when the war ended and I gained admission into University of Ibadan to study economics, studying in a Nigerian University was such a pleasure. To begin with, my roommate then, Okey Ezeokeke and I lived in a two in one room apartment. The university laundered 8 clothes per week for us (trousers and shirts). In addition, two sets of bed sheets were laundered for us weekly. Our shower ran twenty four hours, our toilets flushed always. In each hall of residence we had a bar and buttery where you could have cold drinks and confectionaries at affordable prices directly from breweries and the university catering department. You were also allowed to entertain your guests at these air-conditioned lounges.
Each faculty had a library apart from the central university library. Every journal published in the world was available in our libraries within two weeks of publication. We had a university press which made publication of books by our lecturers easier and the books affordable. The university had a busy bookshop which sold text books, journals, magazines and novels. Accessibility to knowledge was guaranteed even without digital technology. Lecturers were encouraged to publish.
Because of their scholarly publications, they were demanded globally. Every year so many lecturers were engaged inprominent universities all over the world. Every year several lecturers served out their sabbatical and returned with new knowledge, new exposure, modern cars and a global and cosmopolitan saga. Many students developed ambitions to become lecturers. The first class graduates were retained as assistant lecturers to take us in tutorial classes. The tutorial classes explained the lectures, deepened our knowledge of the subject matter and took us through past question papers in order to widen our comprehension and prepare us for examinations. Suddenly all these have disappeared. Instead, handouts have taken over because they are sold for extra cash by lecturers even when they contain very little or represent copying or plagiarism!!

Loved at the centre and by majority of its constituent units and endeared by the opposition party, actors in Nigerian governance in persons of President Buhari, Vice President Yemi Osinbajo and Oyo State Governor, Seyi Makinde, his counterpart have at different times and fora glued him to one sobriquet. While Vice president nicknamed him “Mr. Project”, the Governor of Oyo state tagged him “Mr. Quality Project” and President Buhari capped it all with a distinguished award for Infrastructural Delivery. At the dinner party held in honour of the awardee, his predecessor, Dr Peter Odili did not mince words to acknowledge him as “a governor whose achievements have surpassed all his predecessors. Without much colouration, aesthetics and fanciful prescriptions, the man at the centre of the discourse is Chief Nyesom Wike.
Upon assumption of office in May 29, 2015, Governor Wike introduced a synergistic approach that intertwined the executive, legislative and judicial functions in Rivers State to fast track the wheel of governance. He ensured that other arms of government, residential and official premises were befitting of their status and personalities. Little wonder, he gained a checkered history of attracting Nigerian Law School to the Treasure Base of the nation. He engaged himself with capital projects that awarded 14 flyovers with giant strides in roads constructions and rehabilitation. Nine flyovers have been completed and it is projected that 12 will be completed and commissioned by January 2023. His achievements in delivering the dividends of democracy to his people also cut across education, agriculture, sports and youth empowerment.
At a period when his party seems to be lying in “comatose”, Governor Wike sustained opposition through dispassionate, critical constructive criticism with the grandeur of esoteric rhetorics and with the firm belief that no situation is insurmountable.
As a rugged and dogged political gladiator full of energy and vibes with ample street wisdom, he further dared the political firmament of the presidential race under the platform of the Peoples Democratic Party (PDP).
Understanding the dynamics of South-South politics and his brother Governors being politicians that are amenable and susceptible to being windy, ambivalent and selfish to their lucrative selfish interest other than their collective interest, he chased his political clout to the North where he mopped-up high chunk of delegates to himself and nearly clinched the Presidential ticket but for the dead hour tribal political gymnastic of the northern politics which saw his political bosom friend disappointing him in the last hour of dire need.
But suffice it to say that Governor Wike has been reckoned with who is who in Obio/Akpor, who is who in Rivers State, who is who in Nigeria and he is eminently and ebulliently part of those who profess what happens in the Nigerian political firmament.
As an ardent party man, Governor Wike still exhibited political maturity and statesmanship by sticking to his party after the party’s primaries even with obvious humongous evidence to challenge the primaries in court. The National Chairman of PDP, Dr Iyorcha Ayu added a bitter pill to the whole episode when he could not betray his emotions by openly revealing his body language for his preference for Atiku Abubakar as he described Governor Aminu Tambuwal as the hero of the convention which eventually earned him the campaign Director General of Atiku.
Power play having conferred the Presidential ticket to the North, the campaign D-G to the North, Governor Wike propelled by humane impulse and inclination towards equity, fairness and justice with much gusto insisted that the national chairman position should go to the South irrespective of the region and that has been PDP’s worst anxiety and conundrum. The national chairman also insisted on relenting in his oars to jettison the plea urging him to resign since his tenure is spiced by legal flavour. Atiku has also refused to hearken to the voice of reason to admonish him to resign, instead, he has aligned himself with spent forces in Rivers State to prosecute his election. By this move, the political battle line was drawn. Cynics have posited that Wike is being selfish. Yours sincerely thinks not so. Ambition should be made of a sterner stuff.
Governor Wike is not asking the chairman to be zoned to South-South but to any part of the South. Governor Wike did not double-chance his political ambition like his counterparts having failed presidential primaries would summersault back to their senatorial zone.
Governor Wike did not project any of his kinsmen from Ikwerre to succeed him but went as far as Opobo/Nkpro Local Government Area to pick Siminialayi Fubura inspite of the numerical strength of his people to deliver any candidate from his area. Having not found him wanting, his traducers are now accusing him of anti-party activities because he endorsed Babajide Sanwo-Olu, the Governor of Lagos State of the All Progressive Congress (APC) extraction. It seems to me that the moth of anti-party activities is on the eye of PDP. Senator Ifeanyi Ararume bought nomination form, cleared by INEC, contested and won Gubernatorial ticket, only for PDP to tag him a leper. He went to court and the court ruled in his favour that he cannot be substituted without cogent and verifiable reason. PDP immediately rallied around the PPA candidate, Ikedi Ohakim and gave him victory at the polls. The hullabaloo in PDP now has placed Governor Wike as the most handsome groom sought by different bridal political parties and the last card in the 2023 presidential race.