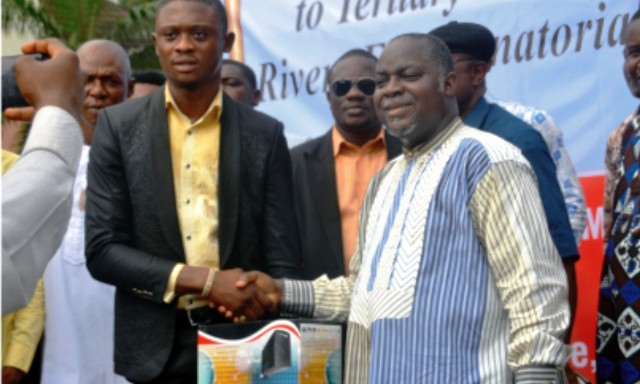 Some prospective candidates say they are facing poor internet network, stressful and cumbersome process in registering for the 2017 Unified Tertiary Matriculation Examination (UTME) in Ebonyi, Abia and Imo, states.
The Tide Source  who monitored the situation in these three states, reports that there are long queues at the banks and registration centres, including JAMB Offices.
In Abakaliki, the prospective candidates suggested inclusion of more banks in the sale of JAMB forms.
According to them, in Abakaliki on Tuesday using only two banks – Union Bank and Unity Bank – to sell forms to thousands of prospective candidates was frustrating.
The candidates claimed that some of them had spent many days without obtaining the form, even as some who don’t have relatives, had to come to the state capital every day in an attempt to buy the form.
They expressed fears that many prospective candidates might not purchase the forms within the specified time frame, unless urgent steps was taken to remedy the situation.
Messrs Victor Nkpuma, Richard Okafor, Philip Onwe and Miss Eunice Oko, said that the two banks were inadequate for Ebonyi and called for inclusion of more banks, to ease the process.
“The idea of using only Union Bank and Unity Bank for the sale of the form to me is not the best for the state because the two banks can hardly serve the purpose adequately.
“There was almost a stampede in Unity bank the other day because the crowd was so much and the bank’s security personnel could not control the crowd because everybody wanted to get the form at the same time.
“There should be an inclusion of more banks to ease the frustration and pain that those coming to obtain the form are made to go through and again many people may not be able to get the form within the time frame, Nkpuma said.
Okafor decried the current registration procedures, and described it as more tedious, complex, time and money consuming.
According to him, candidates are first expected to go to JAMB office and fill a profile form that would contain his or her e-mail address linked to the JAMB website.
The candidates after filling the profile, would go to a designated bank with the form issued to them at the JAMB office and buy the entrance form at the cost of N5,5000.
According to him, candidates are still required to pay additional N700 to collect JAMB brochure and a novel at designated banks.
“The procedure is frustrating, cumbersome, time and money consuming and I am afraid that many intending candidates may miss, if the board doesn’t relax the tedious process.
“Again having only two banks to serve the whole of Ebonyi in the sale of the form is an unthinkable action because many will definitely miss out,” Okafor said.
Meanwhile, Onwe and Oko have urged the board to reduce the fee payable by prospective candidates, to make it possible for indigent candidates to obtain the form.
They also urged JAMB to give more banks permission to sell the forms to candidates.
“The procedure adopted by JAMB in the 2017 sale of the UTME form is frustrating, time and money consuming unlike in the previous method where a candidate goes to a cyber cafe and do the online registration.
“The former procedure was simple, easy, less stressful, less time and money consuming,” they said.
In Owerri, the candidates told The Tide online source, that the problem of invalid Personal Identification Numbers (PIN) had contributed to delays in the registration process.
A candidate, Johnson Nnadozie, said he paid at Sterling bank and received a PIN, which he had been unable to use since, adding that he had gone back to the bank severally and was told to keep retrying with the same PIN.
Gift, said that the centre collected additional charges for creating JAMB profile and e-mail for applicants who had no personal email.
“There are some applicants who use their cellphones to create the JAMB profile, using their e-mail. Such people pay the JAMB registration fee of N2,500 only,” Gift said.

Firm Calls For Partnership With FG On Bridge In Real Estate

A Nigerian Tech Firm, PX PropertyHub, has called for partnership with the Federal Government in order to showcase its efforts to bridge the gap in the real estate sector.
The General Manager, Operations/Legal of the company, Barr. Nonye Nwabueze, made the remark during the official unveiling of the firm’s innovative online real estate platform in  Abuja, recently.
Nwabueze said there was a need for collaboration with the Federal Government to help Nigerians build long lasting wealth through Real Estate, leveraging on technology and experience.
“The Federal Ministry of Works and Housing is doing so much in this regard, trying to create several mortgage financing activities.
“We are calling for partnership to showcase what the Federal Government is equally doing in the sector to provide affordable housing for Nigerians and checkmate the activities of fraudsters in the sector”, she said.
She noted that the new technological-driven option by PX PropertyHub stands out, saying that it was  a massive and fast-growing digital platform.
“The platform showcases available property to everyone resident in and anywhere in the world. It is a global platform and we are not stopping at this.
“We also have what we call ‘PX Stay’, where we equally showcase hotel owners, apartments, car rentals and others. Jt is actually a listing platform for anyone who wants to buy, sell or rent genuine properties,” she said.
Chief Charles Ndudim, a beneficiary of the platform, said the issue of housing must be treated as a fundamental basic right of every citizen in the country.
He said the Federal Government and the corporate world must collaborate to deal with the issues and challenges in the real estate sector just as is being done in other climes.
“In other developing countries such as Nigeria, to deal with the issue of housing, we have to see it as a fundamental human basic right of every Nigerian.
“Every man under the sun needs a roof over his head, but there are economic implications and challenges in the sector as not everybody can afford it.
“However, what other developing countries have done is to find ways of creating intervention programmes for the poor people, especially in the rural areas”, he said.
“So, government and the corporate world must come together and collaborate in such a way as what PX PropertyHub is doing to aggregate all these houses and make them visible to meet the needs of all Nigerians.
“I, therefore, encourage everyone to take advantage of this revolutionary platform that is making life easier like Amazon and the likes,” he said.
Managing Director and Chief Executive Officer of the firm, Chuka Okafor, said he is a young entrepreneur who saw a gap in the real estate sector and decided to proffer solutions to the issues and challenges in the sector.

He stressed the need for investors to take advantage of the hassle-free and convenient platform to rent and purchase their house dreams.
Okafor said the platform can also connect holiday makers with preferred hotel and any tourist destination.
“PX PropertyHub is a modern Real Estate Platform, connecting buyers, sellers and owners with the industry’s top professionals through technology that empowers you by making all things Real Estate simple, intelligent and seamless.
“We have built our Real Estate Hub to serve as a platform that streamlines the tedious process of selling, buying, renting, managing, and financing property”, he said.

Delta State Polytechnic, Ogwashi-Uku (DSPG), has developed a prototype of a “Smart Campus” expected to operate with technological systems, regulate movement and ensure digitisation.
The Rector of the institution, Prof. Emmanel Achuenu,  while elaborating on how the smart campus works, said the institution was technologically-driven with research results and development in Abuja during the week.
Using their campus as a case study, Achuenu said they deployed solar energy to power the model campus.
“We decided to deploy solar energy in increasing the provision of energy to a model campus like this. In our campus, we have a solar laboratory where students are supposed to be trained on how solar functions and the installation, but we have gone ahead to run an institution like this with solar generators”, he said.
Achuenu added that they also tried to put a security system in place to monitor movement within the campus using smart Identity cards configured for each student and staff at the entry point of the institution.
“For you to be able to secure this system, every student and staff in the environment is supposed to have a smart ID card we configured according to the need.
“To enter the gate, all you need to do is swipe your card in the smart system provided there and you gain access”, he said.
He, however, solicited funding from agencies of the government to support the institution to be able to move all their ideas and technologies beyond prototype.
”We are asking for any funding agency to come to our support so that we can mass produce the majority of what we have here. If we can have our automatic detectors in every environment, it will help check on our security challenges”, he said.
The Tide’s Source recalled that DSPG participated at the just-concluded Science, Technology and Innovation expo and had other products on display.
The other products included: Juice extractor, peanut coating machine, ice block making machine, automatic hand washing machine, ventilator and melon shelling machine.

The Passport Control officer of the Nigerian Immigration Service (NIS), Rivers State Command, DCI Bala Dangana, has expressed worry over a large number of unclaimed passports at the Passport office in Port Harcourt.
Dangana said this when he received the  Comptroller General of Immigration in charge of zone G, Mr. Dominic Asogwa, in Port Harcourt, recently.
He said about 5000 passports were ready for collection, but the applicants are yet to show up.
Noting that the Passport Unit usually issues passports unconditionally to owners, he said the success story so far recorded was due to the digital system of the Command which has so far simplified the whole process.
He further noted that the era of delay  in passport printing and issuance were over, and urged applicants to not let past experiences deter them from applying for their passports.
“The Command is up-to-date on passport issuance and printing. We are almost done with that of last year. We have printed up to November, and sure that we are top on the business”, he said.
Earlier in his speech,  Asogwa  said he was in the office on the order of the Comptroller- General of Immigration, Idris Jere, to ascertain the position of things as it concerns passport collection.
“I am here to appriase with the directive  of the Comptroller-General that all applicants of international passport have collected them without delay”, he said.
Asogwa also pleaded with members of the public to reach out to their loved ones who have applied for passports to hurry and claim them.
He lauded Dangana and his team over what he described as the “high level of professionalsm cum creation of additional units in the passport unit which has added colour to the system”.
Meanwhile, the Passport Control officer  further informed that the Command has, by extension, placed calls and sent Short Message System (SMS) to some of the passport applicants in order to make room for easy collection.