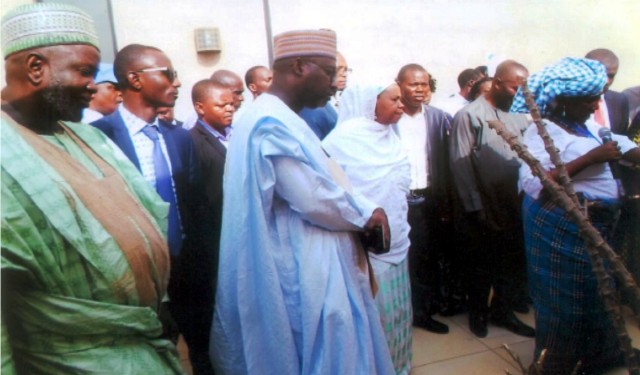 The National Union of Petroleum and Natural Gas Workers, NUPENG, has suspended its nationwide strike which began on April 2.
The suspension followed the intervention of the Group Managing Director of the Nigerian National Petroleum Corporation( NNPC), Dr Maikanti Baru.
In a statement by Mr Ndu Ughamadu, NNPC group General Manager, Group Public Affairs Division on Monday in Abuja, Baru said his intervention was in the national interest.
Baru further approved the increase in bridging costs from N6.20 to N7.20.
Bridging is money paid tanker drivers per kilometer for trucking petroleum products from depots to final destinations.
‘Mediating between the Nigerian Association of Road Transport Owners, NARTO, and the Petroleum Tanker Drivers (PTD), Baru said “we understand the difficulty of NARTO to go into negotiations which has to do with the level of bridging allowance.
“I am happy to announce that the Honourable Minister of State for Petroleum Resources, Dr Ibe Kachikwu, has given his approval to increase the bridging allowance from N6.20 to N7.20”, Baru said in the statement.
He said the review should give NARTO the breathing space to engage with PTD to immediately discuss and resolve as many of the issues as possible, adding that the gesture was expected to normalise relations between the unions.
Baru explained that NNPC intervened in the face-off between the unions to ensure the energy security of the nation, adding that ordinarily the dispute was only between PTD and its employer, NARTO.
Announcing the suspension of the strike, the NUPENG National President, Mr Igwe Achese, said with the intervention of Kachikwu and Baru, NNPC “has done so much to ensure efficient supply and distribution of petroleum products across the country, hence, the strike is hereby suspended”.
Responding, the National President of PTD, Mr Salimon Oladiti, applauded the NNPC for the “timely intervention and urged them to address the unruly behavior of security agencies towards the members”.
Also, the National President of NARTO, Alhaji Kassim Bataiya, assured Baru that “with his intervention, the condition of service document would be reviewed to improve the drivers’ welfare”.
Joseph Akinlaja, Chairman of House of Representatives Committee on Downstream, who represented Speaker Yakubu Dogara, commended Baru for his intervention, saying it had saved the country a lot.
The drivers downed tools due to unresolved issues concerning their welfare, poor remuneration, insecurity and bad roads.
They also complained of harassment by some members of the security forces on the highwa