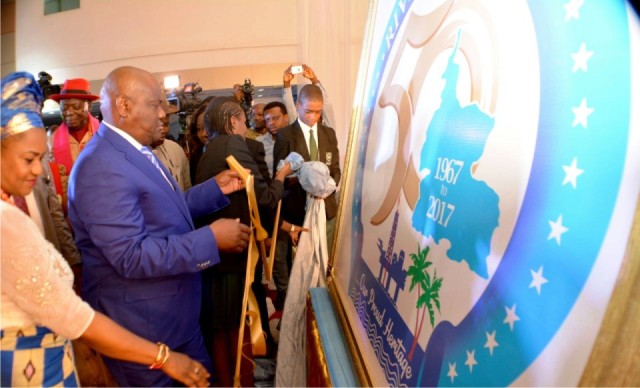 As Rivers State continues to celebrate her golden jubilee with series of activities which is expected to climax in May, this year, sports competitions, especially those that are cultural or very popular in the state have been scheduled to add colour to the celebrations.
This was disclosed to sports journalists this week by the media/publicity and performance, and Exhibition. Sub committees of the Rivers Golden Jubilee Committee in a press briefing at their office in Port Harcourt.
According to the Hon. Commissioner for Housing, Emma Okah, who is a member of the committee, five sports competition, football, Boat Regatta, Cycling, Polo and wrestling have been chosen as part of events to mark the Golden Jubilee celebration.
Okah said that the football competition, just like the other would be very interesting and colourful, typical of the standard expected of Rivers State.
Disclosing details of the football competition, Okah said that the competition will be among the 23 local government areas of the state with the preliminary stages holding at the three senatorial districts. Two qualifiers would emerge from each district, while the two best losers would be considered to in order to make up the quarter final pairings.
The competition will move to Port Harcourt from the quarter finals stage. The Inter-local government competition is exclusively for indigenes of the LGA being represented and only players who have not participated in any Nigeria Football Federation, NFF organised competition are eligible.
Registration forms are to be collected from the committees office between third and fourth of April and returned on or before 10th April, 2017.
The quarter final matches have been scheduled for April 29, semi finals for May 12, third place, Sunday May 14, 2017.

The  Chairman of  Rivers United  Supporters Club, Franklin Owhor, has frowned against the rejection of the Adokiye Amiesimaka Stadium in Port Harcourt to host any of  CAF Confederation’s Cup, (CAFCC) games.
He said the rejection will deny United to get total home support when the CAFCC competiition starts next week, saying that playing at home has its own peculiar advantage.
Owhor said this on Wednesday  in a telephone interview with Tidesports after the reports from CAF that said the   Nigeria Professional Football League ( NPFL) champions had  adopted the Godswill Akpabio International Stadium, Uyo for their home matches.
CAF has earlier asked the management of Rivers United to renovate the Adokiye Amiesimaka Stadium, to International standard, saying that the Stadium lack some basic  facilities to host international football competitions.
“ We will still give our maximum support to our team  even though the matches will be played in Uyo, but it is painful that we are playing our home games outside our home.
“ I remember when  Rivers United FC played in Enyimba Stadium sometimes ago, it was not so good for the team  and  we saw what happened .
“But I will say that Godswill Akpabio International Stadium is like a home to Rivers United FC, you can see we defeated Dakkada FC in Uyo so we conceived no tension and fear.
“I use this opportunity to appeal to the State Government through Ministry of Sports to try their best and  return” the team back  to its base, ‘ Owhor said.

Former Akwa United coach, Kennedy Boboye, has dissociated himself from speculations linking him with the coaching job of Nigeria Professional Football League side, Wikki Tourists Tidesports source reports.
The Wikki job became vacant after former handler, Kabiru Dogo, resigned his appointment after amassing only one point in four games.
Following Dogo’s exit, reports have linked the former Plateau United and Sunshine Stars coach with the Giant Elephants, as tweeted by league journalist, Taye Hassan, on Wednesday.
“Kennedy Boboye could be the next tactician to be in Wikki Tourists dugout as information is coming in from a close source in Bauchi,” Hassan posted.
However, Boboye waved off the speculation in a telephone interview with Tidesports source.
“Anything you guys see, just conclude with it, I have been hearing this thing since yesterday,” Boboye said.
While Wikki Tourists have also confirmed the exit of Dogo, the club has put head coach Abdullah Adamu in charge of the squad.
After his spell with Sunshine Stars in 2015, Boboye won the league with Plateau United and Akwa United in 2017 and 2022 respectively, leaving both jobs the following season.

Bendel Insurance coach Monday Odigie has emerged as the clear favourite to win the League Bloggers Coach of The Month Award for January in the already five-week-old 2022/23 Nigeria Professional Football League.
Odigie is contending with Lobi Stars Mohammed Baba-Ganaru, Stanley Eguma of Rivers United as well as Daniel Ogunmodede of Remo Stars for the award.
From their respective numbers in the month under review, Odigie stands above the rest with four wins in four games. Baba-Ganaru, Eguma and Ogunmodede all secured three wins in four matches for their respective teams.
Also, Odigie’s Bendel Insurance have met Remo this season with the Benin Arsenal reigning supreme with a 3-0 win in Benin City.
In the Player of The month category, current league top scorer and Bendel Insurance forward Osarenkhoe Imade also leads the pack with his impressive four goals in four games in the month under review.
Imade scored his first goal on the opening day against Akwa United in Uyo, before following it up with further strikes against Plateau United, Kwara United and Remo.
Other players in the running for the award include Imade’s strike partner, Ismael Sarki, who scored three goals in January; Insurance goalkeeper, Amas Obasogie, who kept three clean sheets.
Lobi Stars duo Joseph Atule and Kumaga Suur and Onyebuchi Ifeanyi of Plateau United are also on the nomination list.