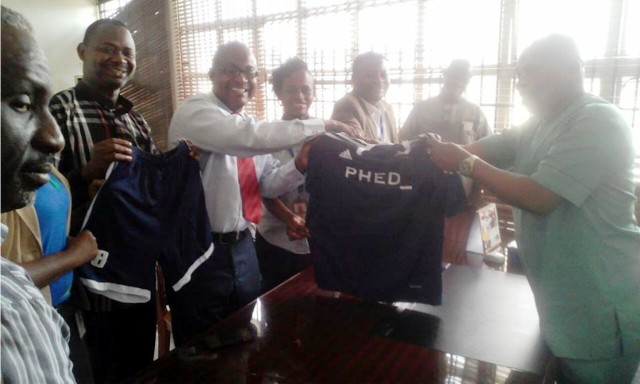 The Port Harcourt Electricity Distribution Company, PHED, has donated a set of jerseys to the Port Harcourt City Local Government Council, PHALGA, in commemoration of the 50th Anniversary celebration of Rivers State.
The Chief Executive Officer of the company, Jay McCoskey, while making the donation at the council’s headquarters in Port Harcourt, thanked the Chairman, Christian Chiokwa, for his role in maintaining peace in the local government area, especially in curtailing community crises.
McCoskey, who spoke through the Head, Corporate Communication, PHED, John Onyi, attributed the cordial relationship that exists between residents of the Port Harcourt City and the company to the enabling atmosphere created by the mayor, since his assumption of office.
He said that this was a proof of his passion and commitment to serve his people, describing him as an amiable, peaceful, and exemplary leader per excellence.
The CEO  informed the chairman that the electricity company has been playing a leading role in Corporate Social Responsibility, CSR, since its inception, hence when the request was received, the company wasted no time in responding and “Today, we are donating a set of jersey to the council in its mission to encourage sports development in the area.
“Recently, the power distribution company  supported the National Coalition of Niger Delta Graduates for Non-violence in carrying out sensitization programmes, aimed at curbing cultism and kidnapping in the Niger Delta region, especially in Rivers State
“Mr. Chairman, last year PHED donated over 2000 school bags and  writing materials to pupils and students in commemoration of 2016 Children’s Day that is usually marked on 27th May in our area of coverage.
“Also, 694 customers benefited from PHED’s ‘Power Clinic ‘, an initiative of the company, where free medical checks are conducted on the customers”, McCoskey said.
The Mayor, Hon Christian Chiokwa in his response, thanked the company for their gesture, extolling her for being the first company to partner with PHALGA on the anniversary, adding that the Executive Governor of Rivers State, His Excellency, Nyesom Wike will be delighted with the contribution made.
‘I am looking forward to presenting these football jerseys to the governor during the anniversary.
‘I seize this opportunity to call on other corporate bodies in the Port Harcourt City to emulate the good actions of PHED and support council, especially in a time like this,’’ he stated.