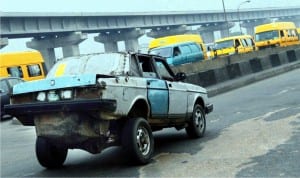 A car specially built for smuggling at Apapa wharf Bridge in Lagos, recently.

The Rivers State Sus
tainable Development Agency (RSSDA), says it is working on plans to revive the Isaka High School to enable it train the youth in the maritime Education.
The Chief Executive of the RSSDA, Mr Harry Pepple, who disclosed this on Tuesday in an interview revealed that the agency has concluded plans to collaborate with the Academy of  Maritime Education Training (AMET) University of  India and Rivers State University of Science and Technology (RSUST) to train and engage Rivers youth on various courses in Maritime.
Pepple said if the agency could actualize the plans, it would train seafarers and all operators of maritime that would feed the maritime sector in future for the state.
He regretted that successive governments in the state abandoned the vision of the first military Governor of the state, Commander Alfred Diete-Spiff  in establishing the Issaka High School, stressing that the agency is working on how the school will function to full capacity.
He said the school will function as an off campus of the AMET University India and RSUST, explaining that the agency has done its survey and quantification to revive and make the school functional to train men and women of the state in all maritime sectors and make youths useful to the maritime sector rather than being an impediment to the operators of the sector.
According to him, “If this is done, the agency will train divers, swimming attendants, caterers, deckhand life guide, and others and also boost the state and nation’s tourism sector ’’.
He revealed that the present administration of the agency will give the youths reasons not to resort to violence because they will be given resources to manage, trained to be captains of oil and gas sector and also give them education to enable them agitate for their rights.
On the safety of the water ways, Mr Pepple said the agency is working on how to collaborate with the Federal Government to protect the water ways as well as protect the economy of the nation.
“We are working on how to sustain the safety of our water ways and we are expecting everybody to key in to it and make our water ways better and safer for users’’, he said.
Pepple however said the agency is proposing a water way maritime safety security system to cheek piracy and safeguard the water ways.