Some residents of Ibolo
community in Obosi, near Onitsha, Anambra State, have called on the state government to save them from the erosion menace threatening their existence.
The traditional ruler of Ibolo, Chief Anthony Ekechukwu, made the appeal at Ibolo while conducting newsmen round the erosion-devastated areas in the community.
Addressing newsmen, Ekechukwu said that the people of the community were deeply pained because of lack of social amenities in the area.
The monarch added that the people had lost life and property to erosion and their economic activities badly affected.
“We are like abandoned people, we pay our taxes, levies but there is no road here, nothing is working, that is why we are crying to the government for help.
“We need good roads and electricity while the erosion menace should be checkmated,” the monarch said.
Also speaking, Chief John Okoye, a resident in the area said that the community was in dire need of attention as its residents were still counting their losses from the last raining season.
“We need lot of assistance, there is no road to drive home as vehicle owners park their vehicles at Owerri road because we have been cut-off by erosion,” he said.
Mrs Chinasa Onuoha, a proprietor of a primary school in the area, said lives of pupils were in danger as there were no good roads for vehicles to convey them to schools.
Onuoha also called on the government to do some palliative works before the raining season sets in.
“During last raining season, four women, including a pregnant mother, were swept away without a trace of their bodies, so we are angry that taxes and levies we paid are not even used for our good.
“All these are affecting security of lives and property,” she said. 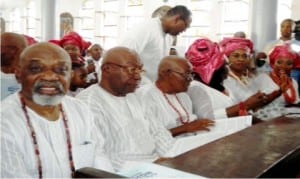 L-R: Minister of Labour and Employment, Senator Chris Ngige and his siblings, during the burial of his father,Late Pa Pius Ngige, at St. Mary’s Catholic Church, Alor in Anambra State on Friday