The Edo Commissioner of
Police (CP), Mr Chris Ezike, said that hunters and vigilante groups were instrumental to the great successes recorded by the command in crime reduction in 2015.
Ezike, who made the remark in an interview with newsmen in Benin, described them as “critical stakeholders in community policing.’’
The CP said that upon his assumption of office, he quickly identified the need to adopt a strategy that would assist the command in fighting crime in the state.
“Our acts, which shifted from arms and ammunition to community-based policing, assisted a lot to bring a reduction in criminal activities since my assumption of office.
“My interaction with community leaders in the 18 Local Government Areas of the state brought a synergy between the command and the communities, where everybody now see themselves as stakeholders in the act of policing.
“Ours was to make the environment better, provide the needed fire power and provide the support to encourage the people to provide the vital information that led to the activation of our strategy and success was the result.
“We identified the hunters and the vigilance groups and encouraged the Enogies to help us reach out to the people in the areas for information.
“We also identified the problem of pressure points and then deployed specifically to get specific results. We identified the bye-pass to have acquired a notorious status and we deployed 13 strategic intervention vehicles that it became difficult for the hoodlums to operate with impunity.
“Our success at Igarra was the icing on the cake with a quantum of arms that came off the hoodlums and the non-explosive devices that came out of the arsenal of the hoodlums accounted for the calm witnessed during the yuletide in Edo North,’’ he said.
According to him, “the statistics will come out later. But I want to say that the success was robust and all thanks to the overwhelming and robust media and public support.’’
“There is an ongoing five-day training for vigilance groups, to help them develop the mechanism of safety and security and respect for human rights in their quest to assist the police to fight crime,’’ he said.
On the alleged involvement of police officers in cultism, the CP disclosed that several police officers were under investigation over their alleged involvement in cult-related activities in the state.
He said: “a lot of officers are under investigation based on suspicion. But you know that suspicion, no matter the quantum, cannot be used against anybody, except we are able to establish a case against them.
“But I can tell you that since these people now know that they are being watched, there is a renewed effort among officers and men of the command towards duty, knowing that they can be moved or sanctioned when found guilty.
“Previously, there was this lackadaisical attitude that tended to give some of the officers out as sympathizers of cult groups.
“But as I speak, everybody is on his or her toes, knowing that what applies to the cultist will apply to any one caught,’’ he added. 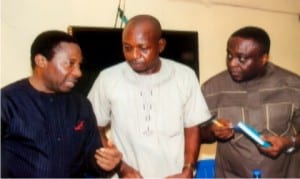