The fact is that, it is only
few people that will dispute that environmental degradation is rampant throughout  the oil producing region  of Nigeria. Whether due to oil spills gas flaring, dumping of wastes associated with drilling artesenal refining or other related activities, the impacts on the environment and human livelihoods and health are widespread and severe.
Environmentally, the Niger Delta is sick and the inhabitants are poor. Moreover, there seems to be a rising tide of criminality and militancy in the region and this has made most communities, particularly in the riverine areas unsafe.
It is an obvious fact that the greatest casualties are the environment and the people.
It would be recalled that, in the past, the people of the Niger Delta have embarked on series of legal actions to seek redress on the pollution of their lands.
A publication recently released by the Centre for Environmental Human Rights And Development (CEHRD) revealed that over 38 environmental related cases have been prosecuted in the region since 1970.
The publication titled; “After Bodo: Effective Remedy And Recourse options for victims of environmental degradation related to oil extraction in Nigeria” showed that in many of these cases, the affected communities and individuals received compensations both monetarily and otherwise.
According to the report, the cases all bothered on pollution which include, pollution of water ways, and destruction of farmlands.
The first of these cases include; Mon Igara V. Shell BP 1970, San Ikpede V.SPDC PDC 1973, Atubie V. Shell BP PDC 1974 and Chinda v Shell BP PDC 1974.
Also mentioned in the report are; Umudje V. SPDC 1975, Nweke and others V. Nigerian Agip Oil Company in 1976. The report also said that in 1986, a number of oil companies were held liable in a case of crude oil pollution which occurred in the Calabar River and spread to Port Harcourt  River damaging marine life and raffia palms.
Other cases also examined by the report includes; Nwadiaro V. SPDC 1990, Otoko V. SPDC, a case of oil spillage along the Andoni River 1990, SPDC V Ambah 1991, SPDC V. Enoch 1992 and Elf V. Opere Sillo 1994.
The publication also mentioned the cases of SPDC V. Farah 1995, SPDC V. Tiebo 1996, SPDC V. Amaro 2001, SPDC V. A. Otelemaba Max, SPDC V. Isaiah 2001, Mobil V. Monokpo 2003, SPDC V. Edamkue 2003 and NNPC V. Sele 2004.
The rest are; Gbemre V. SPDC seeking a declaration to stop gas flaring in 2007, Phyne V. SPDC 2006, Firibed V. SPDC also in 2006.
Also are Agadia and Uruesheyi SPDC .V. SPDC 2006, Chief Omu and others V. SPDC V. Ohaka 2008, Agbara V. SPDC 2001 – 2010 SPDC V. John 2011, John Holt Krebale and others V. SPDC and Barizaa M. T. Dooh V SPDC in 2012.
The report further mentioned other cases such as Ogbodo V. SPDC 2011, Batan, Delta State V. SPDC, Bodo Community V. SPDC, SERAP V. Federal Republic of Nigeria and the Bonga Oil Field coast of the Niger Delta.
The report which dwelt extensively on the Bodo V. SPDC case described it as the most successful.
According to the report, the well studied and highly publicized Bodo V. Shell cases began with two large spills in August and December 2008 affecting thousands of fishermen and farmers in Bodo and neighbouring communities.
“The oil company’s response to the spill was slow and it infact admitted liability”.
It noted that the case which greatly benefitted from legal expertise and scientific evidence led to an out of court settlement in which a whooping sum of 83.3 million dollars was paid to the communities.
Commenting on the report in an interview with The Tide, a Director in the Centre for Environment Human Rights and Development (CCHRD) Mr Laurent Dube, said that getting Justice for the communities have always been problematic  except the case of Bodo.
Mr Dube said that, the situation shows the level of resistance to environmental pollution in the Niger Delta, adding that the resistance will continue  for a longer time to come until the oil companies change their strategies in their operations.
The overall impacts was that while some of these communities got compensations, others never received any  compensations.
The report also revealed that, some loop holes in our Judicial System were exploited by the companies to deny the communities of their rights. A case or point was that of Gbemre V. SPDC in Delta State, in which a declaratory injunction was sought for the stoppage of gas flaring on the Niger Delta by April 30 2007.
The Tide learnt that in the same year, the Judge was transferred to another court and the court file went missing.
SPDC however obtained a court order, thereby further delaying compliance and currently ruling has not been enforced.
The effect is that the non enforcement of the ruling has made gas flaring a common phenomenon in the Niger delta.
In the other cases, although compensations have been paid to the communities, but that has not stopped the companies from further polluting the environment.
An environmentalist, in the Niger Delta, Mr Thomas Ikaraba told The Tide in an interview that, the impacts of these litigations are yet to be felt in the region as after monetary compensations, the environment are left un-cleaned.
Mr Ikaraba cited the case of Bodo, where individuals and families received monies, but the community is yet to be clean up.
He urged for legislations that will make it crime for companies not to clean up polluted sites after paying compensations.
He views were also shared by across section of environmental Right Activities in the region.
In summary, the report showed the level of resistance by the people to pollution in the Niger Delta and the probable impacts. 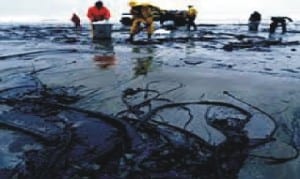 An oil spill polluted site in the Niger Delta

Environmental Rights Action/Friends of the Earth Nigeria (ERA/FoEN) has applauded the directive of President Muhammadu Buhari on the audit of the accounts of Hydrocarbon Pollution Remediation Project (HYPREP).
Uyi Ojo, the Executive Director of the foremost environmental civil organisation, gave the applause at the official presentation of United Nations Environment Programme (UNEP) assessment report and HYPREP’s performance scorecard to newsmen and members of its affiliates in Benin.
The Tide source reports HYPREP is an agency charged with the clean-up of Ogoniland and the Niger Delta States since its inception in 2016.
Uyi urged the president never to allow the directive to go the way of a similar one ordered into the Niger Delta Development Commission (NDDC).
This audit, he said, was currently in a long-drawn-out process on the work of the commission.
The executive director noted that apart from the accounts, an audit of the cleanup and remediation work carried out under the project should also be conducted by an independent body.
According to him, if the Nigerian government, the Ogoni people and partners are going to request the international community to support the continuation of the project, there must be transparency and accountability in the way the initial $1billion fund was utilised.
“The payment of $1 billion was for cleanup and remediation in the first five years in a cleanup that will last 25-30 years.
“The agreement between the Federal Government and Shell Petroleum Development on one hand, and the Ogoni community on the other hand, was for the contributing stakeholders to pay $200 million yearly for the initial five years.
“But for four years after the project was launched, only $360 million has been paid as confirmed by the NNPC during a public hearing at the House of Representatives in Abuja in 2020.
“There is no update on whether further transfers had been made for 2021 and 2022,’’ he said.

WildAid says Nigeria lions are on the verge of extinction. This is contained in a statement signed by Kelechukwu Iruoma, WildAid Representative in Nigeria and made available to The Tide source in Lagos.
WildAid said that it launched a weeklong campaign to raise awareness about the threats facing Nigeria’s lions to mark World Lion Day.
WildAid said that over the last 50 years, the number of wild lions across Africa had plummeted from 200,000 to roughly 20,000.
“The crisis is most acute in West Africa, where there are only about 400 lions left, surviving in a few small isolated clusters.
“In Nigeria, lions are on the verge of extinction, with scientists estimating that there may be fewer than 50 adult lions left in the wild.
“In the past, lions roamed northern Nigeria in large numbers, primarily residing in the Kainji Lake National Park and the Yankari Game Reserve in northern Nigeria,” WildAid said.
The statement quoted Simon Denver, Senior African Representative for WildAid as saying:
“Hunting for bush meat has seriously depleted lions’ natural prey base, while population growth and the expansion of agricultural land has badly eaten into their habitats.
“Lions in Nigeria and across West Africa need urgent help to prevent them from disappearing forever.”
Denver said that the intense pressures on lions’ natural prey caused by bush meat trade and the erosion of their habitats often force them to kill cattle for food.
According to him, the phenomenon brings lions into conflict with humans, who kill lions in retaliation, sometimes using poison.
He said that snares and traps set by bush meat hunters also often inadvertently cught lions and other predators.
“Lion populations in East and Southern Africa are feeling the same pressures – even in Tanzania, which is considered to be the stronghold of Africa’s remaining lions.
“Tanzania has the largest population of lions in Africa with about 8,000 animals left in the wild.
“They provide an important draw for Tanzania’s tourism industry, which generates around 1.5 million jobs and contributes around 17 per cent to the nation’s Gross Domestic Product (GDP).

A member of the Port Harcourt City Environmental Sanitation Committee, Mr. Blessing Dickson Tiko, says the Njemanje refuse dump site is no longer a threat to residents of Diobu and its environs.
Tiko said this in an exclusive interview with The Tide in port Harcourt.
He also said the dump site was borne out of the need to have an alternative place for the dumping of refuse following the shutting down of refuse dumps by the Rivers State Waste Management Agency (RiWAMA) few months ago.
According to him,”you will agree with me that Port Harcourt has been clean except that few months ago, we had problem with RIWAMA and by God’s grace today Port Harcourt is clean”
Tiko said the problem was not peculiar to Port Harcourt City alone as even sister Local Government of Obio/Akpor suffered similar fate.
“It is not only Port Harcourt City per see at that time, many dumps were shut and Njemanje was the only dump existing and it helps in no small measures in terms of refuse disposal.
He said the dumpsite had been shut down following complaints from various quarters.
“However we know the community complained. The Nation newspaper complained. The Tide Newspaper complained, the Mayor we have is a listening Mayor, so, when he heard the complaints, there was noting to do than to shut down the place, ”he said.
Tiko said the council has acquired a new dump site at Igwuruta.
He commended the Mayor of the Port Harcourt City Local Government Council, Sir Alwell Ihunda for his commitment towards keeping Port Harcourt City clean.
Tiko said the council was also leaving no stone unturned to ensure that markets through out the city were kept clean always.
“I think the Thursday sanitation exercise comprises the markets, shops and motor parks ,but they are not following it up, it is an enforcement issue.
“People need to take it seriously but there is no seriousness in it and the government had to do something about it because it is the only time we see people bring out dirt especially in Diobu axis”.
He said also said DIOBU axis of the city generates more refuse than other parts because it population density
Tiki also advised that the monthly enviromental sanitation exercise be revive ,while dumping of refuse on road median be discouraged.