The Catholic Archbishop
of Abuja, John Cardinal Onaiyekan, yesterday cautioned politicians in the country against vengeful politics.
Onaiyekan gave the warning in his homily at St Rita’s Catholic Church, Nasarawa, as part of activities lined up to mark the 70th birthday of Mr Emeka Asoegwu, President of the Catholic Men Organisation.
He urged politicians to desist from using their power and authority to seek revenge against perceived enemies and to learn to forgive.
He said that forgiveness had the capacity to promote peace and development in the country.
“Politicians should learn to forgive and stop using their powers to hunt down their enemies.
‘We should learn to share and care for others and our neighbours like the disciples did with the five loaves of bread and two fishes in the Bible,“ he said.
The cleric also called on Nigerians not to indulge uncontrollably in worldly pleasures such as drinking.
While citing the turning of water into wine by Jesus at a wedding feast as recorded in the Bible, Onaiyekan said that wine should not be abused.
According to him, wine is meant to be consumed moderately, and not excessively, to help cheer up the spirit.
The cleric congratulated the celebrant for attaining 70 years of age and wished him many peaceful years ahead.
In his remarks, the host, the Bishop of Lafia Diocese, Most Rev. Mathew Ishaya, said that Onaiyekan’s visit was a show of humility as taught and exemplified by Jesus Christ.
Ishaya wished Asoegwu more fruitful and healthy years ahead.
On his part, Asoegwu said that he was overjoyed that God had preserved his life.
“I feel very proud and elated; to all my friends that have come to celebrate with me, I am grateful.
“I am most grateful to God for his kindness and mercy upon me all these years of my life.
“I have decided to dedicate all the funds that will be raised today for the foundation of the church because all my life, all that I own belong to God and this is just my own way of saying thank you to Him,“ he said. 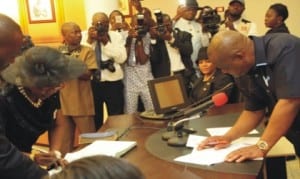 Political Ambition Should Not Be At People’s Expense – Mrs Tepikor