The Adamawa  State Police Command has  confirmed the
abduction of the Vice Chairman of Hong Local Government, Mr Bijida Yakubu, by suspected insurgents.
The Public Relations Officer of the command, DSP Othman Abubakar, who confirmed the incident, said three vigilante members that were with Yakubu lost their lives in the encounter.
Abubakar, who did not give details, however, said policemen investigating the incident had so far recovered the vice chairman’s shoes.
A resident of Hong who simply identified himself as Hussaini told newsmen that the incident occurred in Gayafa village of the area.
“You know, insurgents attacked the village last week. The vice chairman who hail from the village was on an assessment visit with some hunters when the insurgents attacked and over-powered them.
“ About seven insurgents were killed in the encounter before they over-powered the hunters and took away the vice chairman,” he said.
Hussaini claimed that the abducted vice chairman was later allowed by his captors to call his wife with his cell phone before the device was switched off.
The Chairman of Adamawa branch of Association of Local Governments of Nigeria (ALGON), Alhaji Sahabo Gurin, also confirmed the incident.

The Raw Material Research and Development Council
(RMRDC), said it would collaborate with the Bauchi State Government to train 20 local government council chairmen on cluster formation.
The Bauchi State Coordinator of the council, Malam Ahmed Waziri said the training would help drive industrialisation in the state through clusters, which he described as a congregation of various industries that produced similar products, using common raw materials or mineral resources as input.
Waziri told newsmen in Bauchi that plans were on to deploy the council’s Ward-Based Cluster Technology Programme (WBCTP) to all the wards of the 774 local government areas in the country to start the process.
“Clusters have been identified as one of the engine rooms for industrialisation globally.
“When they are concentrated in one geographical location, it is easy for the government to provide them with a common facility.

The Benue State House of Assembly has directed the
state Commissioner for Finance to submit details of revenue received from the Federation Account to it before March 3.
The House gave the directive during the plenary after considering the motion moved by 23 members.
Our correspondent reports  that the motion called on the state government to furnish the house with details of its financial status.
Speaking, the leader of the group, Mr James Ochojila, stated that the constitution had empowered them to investigate any matter or thing that it had power to make laws on.
Ochojila further said that the power of investigation of the House covered the conduct of affairs of any person, authority, ministries, departments and agencies.

The Nigeria Security and Civil Defence Corps (NSCDC)
has  alerted passengers of commercial vehicles in Kaduna to be wary of armed robbers posing as drivers.
The warning was contained in a statement signed by the Kaduna State NSCDC Commandant, Alhaji Zakari Ningi.
It said the operators of the vehicles took advantage of passengers and ended up robbing them at vulnerable spots.
“The operators of painted commercial buses in the metropolis carry unsuspecting passengers but end up robbing them on board,” Ningi said.
He said the command had received complaints from victims of such robberies, and advised passengers to be extra careful while boarding commercial vehicles, especially within Kaduna metropolis.
He said the command had since commenced investigation into the matter after it received “two reports of persons who have been robbed in such manner”.
The commandant urged the general public to assist the NSDC with useful information to track down and apprehend the perpetrators.

The Police in Kano have arrested a female politician,
Hajiya Aisha Maijama’a, over alleged sponsorship of political thugs in Tudun Wada Local Government Area of the state.
The state Police Commissioner, Mr Ibrahim Idris, announced this while briefing newsmen in Kano recently.
Idris said the woman who is a strong member of one of the political parties, was apprehended along with 23 thugs found carrying different kinds of local weapons trying to instigate violence in the area.
He said investigation had commenced after which the suspects would be charged to court.
The commissioner said the command had on different occasions warned politicians against acts capable of causing violence in the state.
He said the command would not allow any groups or individuals to breach the peace, warning that anybody who indulged in acts of violence would be arrested.

The Nigeria Immigration Service in Kebbi  State has de
ported 500 illegal immigrants as part of security measures ahead of the forthcoming general elections.
The Comptroller of the service in the state, Alhaji Abdullahi Salahu, told newsmen in Birnin Kebbi that the arrest and deportation of illegal immigrants would be a continuous exercise.
He said the exercise followed the directives of the Controller-General of the service, Mr David Paradang.
He said the service would ensure that foreigners did not partake in the elections.
“During the mop-up operation 47 National Identity cards; 16 Permanent Voter Cards (PVCs); 53 Temporary Voter Cards and three Court Affidavits were impounded from the illegal immigrants,” he said.

A businessman, Aremulola Anjorin, who allegedly de
frauded some people of N36.7 million, has been charged before an Ebute Meta Chief Magistrates’ Court, Lagos.
Anjorin, 42, is facing charges of stealing, conspiracy, issuance of dud cheques and fraud.
Prosecutor G.O. Osuji told the court that the accused committed the offences at different times in his office.
He said that the accused defrauded Mr Ernest Uduebor of N2.5 million on June 2, 2014, at No. 2, Ayorinde St., Ojota, adding that he defrauded Mr Kenneth Eromosele of N20.9 million sometime in May 2012, on Ogudu Road, Ojota.
Osuji also submitted that the accused obtained N8.9 million from Mr Basil Ogoha under false pretences and issued a dud cheque to him to cover the amount.
“Anjorin also obtained the sum of N4.8 million from one Ibukunoluwa Otesile with a promise to supply her company petroleum products.’’
The prosecutor said that the offences contravened Sections 285 (9) (b), 312(3) and 409 of the Criminal Law of Lagos State, 2011.
Nasarawa

The Oyo State Government says it has met the demands
of its judiciary workers who have been on strike since January 5.
The state’s Attorney-General and Commissioner for Justice, Mr Adebayo Ojo, said this in an interview with newesmen in Ibadan recently.
He said government officials had met with executives of the Oyo State branch of the Judiciary Staff Union of Nigeria (JUSUN), adding that the strike was expected to be suspended.
“We had a meeting with the JUSUN last week and we have fulfilled their demands. We, therefore, expect them to call off the strike,” he said.
But the JUSUN Chairman in the state, Mr Ayoade Ademola, said that the expected suspension of the strike by the attorney-general was “ wishful thinking.’’
“This must be his wishful thinking because our demands are still not yet met. 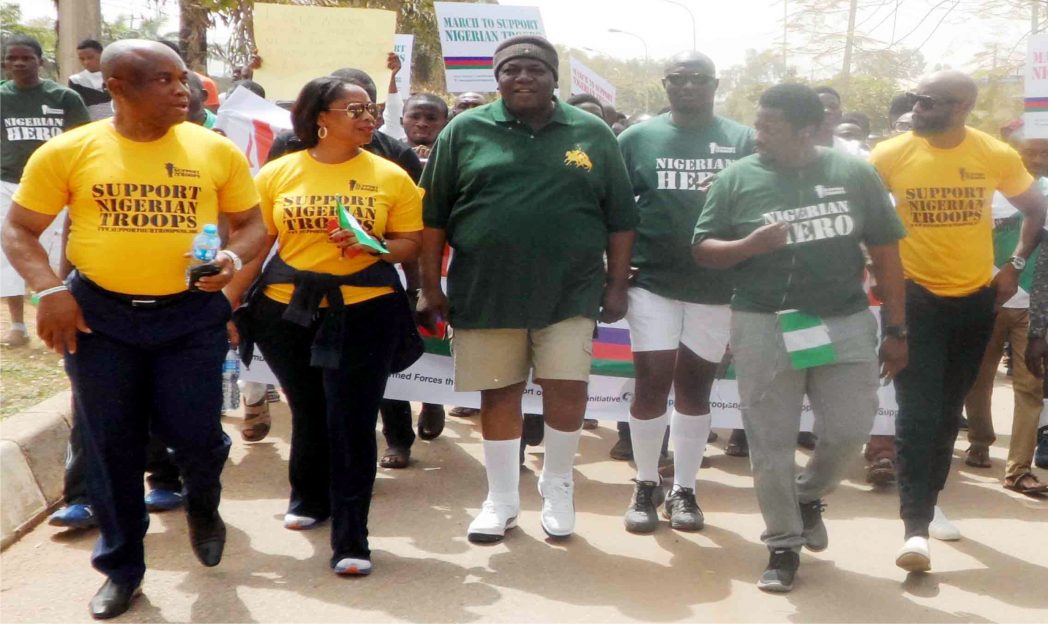 The Archbishop of the Enugu ecclesiastical province, Church of Nigeria, Anglican Communion, Most Rev. Dr. Emmanuel Chukwuma has asked the Federal Government to jettison the idea of paying N5,000 palliative to 40 million Nigerians.
The Federal Government had said the decision was to cushion the effect of the planned removal of fuel subsidy.
But Archbishop Chukwuma, who rejected the removal of subsidy, described the proposed N5,000 palliative “as a huge disgrace.”
He said this during a press conference on the activities lined up for the 50th Anniversary of the Enugu Diocese, Anglican Communion.
While noting that the Enugu Diocese was concerned about the level of governance of Nigeria, he added that “we are also concerned about peace and the unity of Nigeria, as well as infrastructural development.”
He called on the government “to be sensitive about the situation of Nigeria; we frown against the killings, the banditry, the kidnappings, inequality, injustice and all the evils.
“Of late, we can see how ‘Mkpurummiri’ is destroying our youths, it is highly condemnable. We are calling on our youths to please avoid this so that they don’t get their heads out of order. This is not how they will become future leaders.
“Right now, I want to say that the government of Nigeria has not treated the South-East fairly; particularly now that we are getting into the yuletide, Enugu-Onitsha Expressway is a total disaster, Enugu-Port Harcourt they are putting it to use but it is not yet complete.
“We are calling on the minister of works to stop playing pranks and politics with the roads in the South-East. Rail transport should also be extended to the South-East; we see no reason the minister of transport should neglect his own zone.
“It is important for our government to know that most youths are angry; they are angry because they are hungry. I just heard about giving N5,000 to 50 million Nigerians, it is a disgrace. It will not bring any positives on our people. We are also frowning at galloping inflation.
“Our naira is becoming useless and something must be done about it. E-naira or whatever is not the solution at all.”
He also called on the residents of South-East not to toy with the on-going voter’s registration exercise, stressing that “these things count; South-East should stop shortchanging themselves; that’s the only way they will have a say in 2023.”
On the Church’s anniversary, Archbishop Chukwuma disclosed that, “It became a Diocese in August 1970; exactly last year August, Enugu became 50 years of its inauguration with the first Bishop, Rt, Rev. Gideon Nweke Otubelu. By the grace of God, he championed the course of Enugu Diocese for 27 years.
“Last year, when it became 50 years of Enugu’s inauguration as a Diocese, we could not celebrate because of COVID; we had to shift it to this year.

United Nations Children’s Fund (UNICEF), said on Friday that 152,243 children below five years of age are stunted in Enugu State, Nigeria’s South-east.
Its Planning and Monitoring Specialist, Enugu Field Office, Maureen Zubie-Okolo, disclosed this at a policy dialogue with Enugu State executive and legislative councils on investment in nutrition.
Zubie-Okolo attributed the situation to poor nutrition arising from poor maternal, infant and young child feeding practices during the first 1,000 days of birth.
“In Enugu State, only 7.8 per cent of children below five years of age receive the minimum acceptable diet, while less than one-fifth of children 0-5 months are exclusively breastfed.
“This is a call for both the executive and legislative arms to come together to ensure that nutrition is placed on the government’s agenda,” she said.
She said malnutrition had become a silent emergency with “too little attention”.
She said that the meeting was in line with the Sustainable Development Goals agenda of ending all forms of malnutrition by 2030.
Zubie-Okolo said the goals also included achieving the internationally-agreed targets on stunting and wasting in children below five years of age by 2025.
UNICEF was committed to working with its partners, including the state government to achieve the agenda, she said.
Nutrition, according to her, gets low attention in Nigeria and in Enugu State and, therefore, contributes to the high global malnutrition rates.
She said that investment in scaling-up nutrition would yield immediate returns, save lives, and enable children and their mothers to have a better future.
In her contribution, a nutrition specialist, Chizoba Steve-Edemba, said the nutrition indices in Enugu State were so low and needed to be addressed.
Steve-Edemba appealed to the state government to extend maternity leave of nursing mothers to six months.