The National Cashew As
sociation of Nigeria (NCAN) on Thursday, said that cashew export could generate one trillion naira in the next 10 years if properly funded.
The National Publicity Secretary of NCAN, Mr Sotonye Anga, said this in Lagos, at a business luncheon on the nation’s multi-billion naira cashew industry.
“As it is, the cashew sector in Nigeria will require financing to the tune of N50 billion to enable it boost production and in return generate a turnover of one trillion naira in 10 years.
“In the 2015 cashew season, we hope to contribute about N42 billion to the Nigerian economy; that is why we are saying government needs to support the sector.
“We wish that cashew seedlings be included in the Growth Enhancement Support Scheme under the Agricultural Transformation Agenda,” Anga said.
He also urged the Federal Government to establish a National Cashew Seed Programme to consolidate the country’s position in the global cashew industry.
Anga said that Nigeria was presently rated among the top five cashew producing nations in the world, adding that there was need for government’s financial intervention.
The NCAN spokesman said that improved farm level productivity would be achieved by planting improved disease resistant and high yielding cashew seedlings.
He said the nation should start looking at the “cash’’ in cashew, saying “we should look from petrol dollar to cashew dollars because cashew has grown to become a winner crop in Nigeria.’’
“Our annual production of raw cashew stands at 144,000 tons.
“ We should increase our national average in terms of yield per hectare which is around 400 to 600 kg per hectare.
“ We should increase this to at least 1,000 to 1,500kg per hectare through rejuvenation of old cashew farms and capacity building for cashew farmers,’’ he said.
Anga called for value addition to the cashew being exported, saying “when our raw cashew is exported, jobs for Nigerians are exported too.’’
The Chairman at the meeting and member of the Nigerian Institute of Export, Mr Yusuf Nurudeen, highlighted the potentials in cashew production.
“The cashew nut and kernel have a lot of potentials.
“ The commodity that is of commercial importance is the nut which contains 47 per cent of fat, 21 per cent protein and 22per cent carbohydrate.
“It also contains about six vitamins, especially thiamine. The nut contains essential amino acids and yields of 6000 calories compared to 3600 from cereals, among others,” he said.
Nurudeen said that with the dwindling price of oil globally, cashew was a blessing for non-oil export sector of the economy.
The Chief Executive Officer of Export Platform and convener of the meeting, Mr Titi Olukayode, said he was delighted that Nigerians had begun to see the potentials embedded in cashew industry. 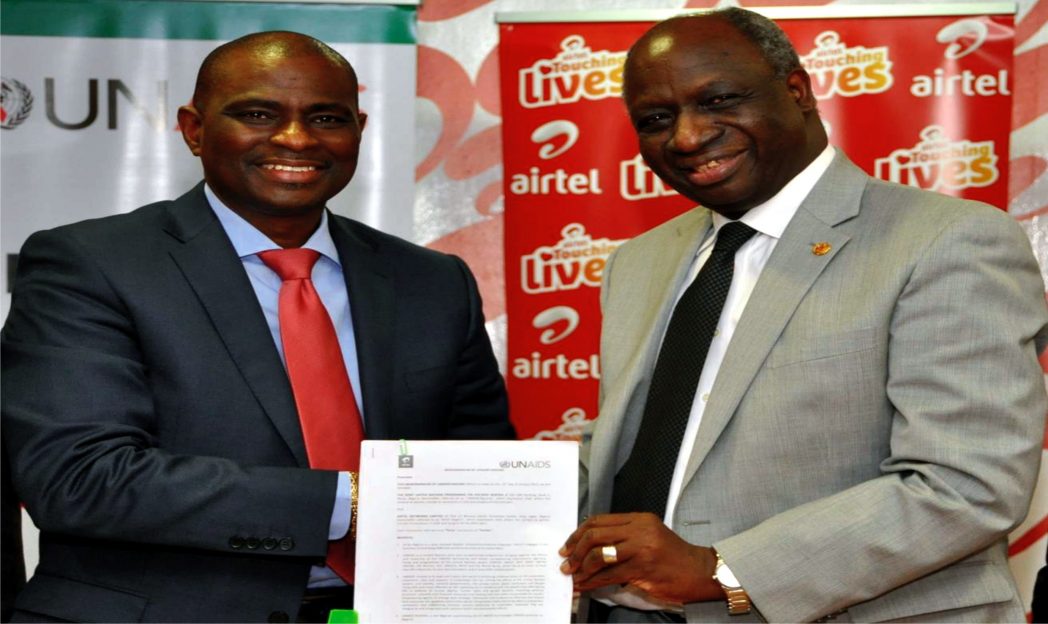 Chief Executive Officer and Managing Director, Airtel Nigeria, Segun Ogunsanya and Country Director, UNAIDS, Dr. Bilali Camara during the signing ceremony of a Memorandum of Understanding between UNAIDS and Airtel to eliminate Mother-to-Child transmission of HIV in Nigeria, at the Corporate headquarters of Airtel Nigeria, yesterday, in Lagos.

In order to upgrade and expand staff skills and capacities, the Industrial Training Fund (ITF) is holding an interactive forum for stakeholders in Port Harcourt, Rivers State, tomorrow.
The Tide gathered that the forum is to update and strengthen human capital development and add additional skills for staff.
The interactive forum with the theme: “Up-skilling and Re-skilling the workforce for result-oriented performance in the post pandemic era, the role of ITF”, is being organised by the Rumuokwuta Area office of the ITF.
Sources at the organisation disclosed that the forum is expected to present an opportunity to receive objective and sincere feedbacks from stakeholders, companies and other clients.
The Tide gathered that the mechanism adopted by ITF has over the years assisted the training fund in reshaping its policies and strategy directions.
ITF was established four decades ago and has pursued vigorously its mandate.
The organisation has not only raised training consciousness in the economy but has also helped in generating a corp of skilled indigenous manpower which has been mining and managing various sectors of the national economy.
It has expanded its structures, developed training programmes, reviewed its strategies, operations and service in order to meet the expanding and changing demands for skilled manpower in the economy.

An earlier plan by the defunct Petroleum Equalisation Fund (PEF) to equalise the consumption of gas, especially Liquefied Petroleum Gas may no longer fly as the government said subsidising the transport cost of the commodity in the face of a liberal market may not work.
This is just as stakeholders were demanding for deliberate policies that would enable the country to harness gas resources to benefit from the global energy transition agenda.
While the defunct PEF had disclosed earlier this year that a scheme to pay for the transportation of gas as part of an effort to encourage the use of cooking gas in homes across the country was being considered, the Nigerian Midstream and Downstream Petroleum Regulatory Authority (NMDPRA) said such a move may be unnecessary.
Executive Director, Distribution System, Storage and Retail Infrastructure at NMDPRA, Ogbugo Ukoha said although Nigeria has gas in large quantities, bottlenecks undermine realisation of full potential.
Speaking in Abuja recently on equalisation for gas, Uhoha said: “the Act provides for liberalisation. We can’t set prices, we can’t equalise it.”
According to him, the market would stabilise at some point and deal with prevailing issues. The Independent Petroleum Producers Group (IPPG), headed by Abdulrazaq Isa, has also noted the right policies were necessary if Nigeria would benefit from its gas resources.
Stressing on the evolving industry landscape, ongoing industry reforms, IOCs’ divestment, and the role indigenous exploration and production companies can play in this new era in guaranteeing the nation’s energy security, Isa said: “Nigeria cannot afford to be left behind in view of the global energy transition agenda. Natural gas should be considered as a transition fuel with deliberate policies formulated to attract investment into the sector.”
While noting that the PIA enactment will set a solid growth foundation for the entire industry, the IPPG Chairman said it was imperative that effective regulations are formulated to derive the full benefits of the Act.
According to Isa, ‘’industry-wide consultation in the enactment of regulations is required to promote inclusivity and ensure robustness of regulations’’.
The IPPG Chairman also identified key challenges being faced by the industry in the areas of security, funding, high operating costs, lengthy contract cycle, amongst others.
’’We look forward to collaborating with the NUPRC in finding long lasting and sustainable solutions to these challenges,’’ Isa said.

Nigeria’s former President, Chief Olusegun Obasanjo, has urged the country to embrace renewable energy for power generation.
Obasanjo, who led the country as military Head of State between 1975 and 1979 and civilian President from 1999 to 2007, made the call, last Friday at the inauguration of a two megawatts, MW, solar power project at the Olusegun Obasanjo Presidential Library in Abeokuta, the Ogun State capital,
He said solar energy is remarkably cost effective as it costs less than two and half years’ supply of diesel to power the generators at the Library and that the project marks one of the enduring personal legacies he is proud to call his own.
“Today, I am speaking to you in a facility powered by the sun – solar energy. It is the way of a future Carter envisioned all those years ago. It will help build the future we want. The Olusegun Obasanjo Presidential Library solar power project is a reflection of our commitment to clean and renewable energy and is the single largest investment this not-for-profit organization has made.
“As large an investment as it is, it is remarkably cost effective. It costs less than two and half years supply of diesel to power our generators. So in diesel terms it pays for itself in less than 3years. So in effect the electricity it produces after three years is almost at no cost,” Obasanjo said.
He noted that solar energy does not emit any green house gases that diesel generators do, and that, as such, it has the potential to earn carbon credits which are currently priced at US$40 per ton.
He added: “Based on estimated annual production of 2,307,000 kilo Watt hours per year, we can expect to earn nearly US$39,589 in carbon credits per year.
“By monetising this facility with strategic sponsorships and marketing alliances we will be able to generate revenue.
“Combined, this solar facility can generate electricity, generate revenues that contribute to the upkeep of the library, help save the planet making a small contribution to climate mitigation and adaptation, provide shade for parking, and be an inspiration for future generations. Who says you can’t make a profit out of saving the planet?”