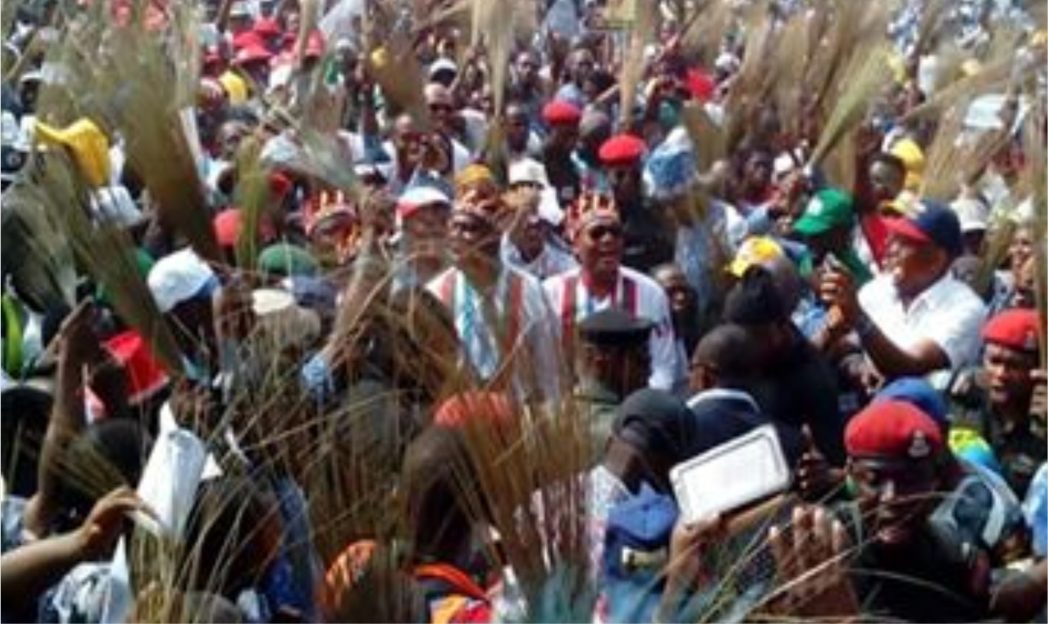 APC supporters at a campaign rally in Rivers State, recently

Bodo community in Gokana Local Government Area of Rivers State appears to be enjoying a new vista following the payment of N25 billion oil spill compensation by the Anglo-Dutch oil giant, Shell Petroleum Development Company of Nigeria (SPDC).
Our correspondent, who visited the area, last Thursday, said the community was agog with construction of new buildings, massive renovation of old houses, and the emergence of a lot of small and medium enterprises.
Chairman of Bodo Council of Chiefs, Chief Livinus Kiebel told The Tide that “massive transformation is going on in the area. Poor women who have never had N10,000 before in their lives are now receiving at least N600,000.00 individual claims”.
Describing the compensation as a big blessing to the people, he said, “Everybody is happy and in every corner of the community, you see a lot of new houses being constructed, massive renovation works are going on in old buildings. New businesses, new vehicles, fishing gears, canoes, among others, are being acquired daily.
“This economic boom in Bodo at this period when Nigeria is passing through ‘austerity’ has also impacted on traders in the area”, said an Igbo trader who deals on building materials in the community, as according to him, daily sales are impressive.
A woman, who identified herself as Mama Lebari, said the life of her family has changed as she and her five sons put their claims together which has brought about a turn around that was never envisaged.
The chairman of the chiefs council, also said “as I speak to you, people have paid tithes and appreciation to God such that my church, St. Patrick’s Catholic Church, Bodo, has received about N20 million from tithe and other forces of appreciation to God.
Kiebel said the people were happy with Leigh Day & Company, the United Kingdom-based firm for assisting the community win its suit against SPDC and the ultimate payment of the compensation, unlike what it used to be in the oil-rich Niger Delta region.
According to him, after a long drawn legal battle with SPDC over the major crude oil spillage in the area that resulted in high scale destruction in 2008, at least, SPDC was defeated and had no option than to pay N25 billion for the damage.
The chief, however, decried what he termed negative impact of oil politics, which frustrates development in the region.
He accused SPDC of always denying responsibility when spills occur from its aged pipes, thereby reducing the economic fortunes of the people.
“The company would always apply divide and rule system, and link the spills to third party and bunkering activities even when such spill was occasioned by its negligence”, he said.
Kiebel also accused the Federal Government of not coming to the aid of the people by wielding the big stick on the multinationals.
“There is too much oil politics frustrating people from getting justice in the Niger Delta over oil spill. No matter how gracious, Federal Government would not come out with the big stick, but would rather make noise while the victims of the spill keep suffering “, he said.
He called for immediate abrogation of the Land Use Act, saying the law is against all norms in modern world.
“Because they see oil as everything, the military people came up with the decree in the 70s”, he stated, and urged the National Assembly to emulate advanced nations of the world and repeal the Land Use Act.