The presidential candidate of the All Progressives Con
gress (APC ), Maj.-Gen. Muhammadu Buhari (rtd),  has promised enabling environment for Nigerian youths to excel, if elected president on  February 14
Buhari gave the assurance at the APC Presidential campaign rally held in Yola last Monday.
He said a World Bank statistic indicated that 60 per cent of Nigerian citizens were under thirty three years and were jobless.
“Sixty per cent of Nigerian citizens are youths who have no job opportunity,” Buhari said.
According to him, the  top priority of his government, if elected, was to ensure security of lives and property and to create  job opportunities for the youth through agriculture and mineral resources potentials.
Buhari said that  APC  government would bring positive development to the people of Nigeria.
He sympathised with the internally displaced persons in the state and assured them that they would go back to their respective places of abode if the APC formed the government in February.

The police yesterday arraigned a driver, Ameobi Ndukwe
before a Wuse Zone 2 Senior Magistrates’ Court, Abuja for allegedly receiving a stolen property.
Ndukwe, 25, who resides at Sabon Lugbe Abuja, was alleged to have bought some clothing materials alleged to have been stolen.
He was arraigned on a one-count charge of receiving stolen property.
The prosecutor, Inspector Usman Owuna told the court that on November 8, 2014 at about 6.25 a.m, one Ms Juremi Shekwoyemi of Sabon Lugbe, Abuja, reported the matter at the Iddo Police Station.
Owuna said that on July 19, 2014 some unknown persons broke into the complainant’s shop and made away with some items which he listed as wrappers, earrings, necklaces among others.
He informed the court that during police investigation, some of the stolen materials were discovered in a tailoring shop owned by one Mohammed Kekere.

The Kano State Government last Monday said it had
approved N62 million for full take-off of the State Informatics Institute in Kura.
The Commissioner for Justice, Mr Maliki Umar, disclosed this while briefing newsmen on the outcome of the state’s Executive Council meeting in Kano.
“The council approved N10 million for the continuation of enforcement of law on the streets, as well as decongestion and illegal motor parks in the metropolis.
“The Council also approved N14.9 million for replenishment of operational funds for task force on drugs abuse and illicit trafficking committee.”
The commissioner reiterated the state government’s determination to develop infrastructure in the state as part of initiatives to improve the welfare of the people.

Some traditional leaders of border communities in Kebbi
State, last Monday pledged to promote peaceful coexistence with their neighbours in Benin Republic.
The district heads of Illo, Alhaji Muhammadu Wankoi and that of Kasati, Alhaji Muhammadu Dobvi gave the assurance when Gov. Saidu Dakingari visited Bagudo Local Government area.
The governor was in the area to inspect some projects being undertaken by the state government.
The district heads in their separate remarks said they would encourage their subjects to always portray Nigeria in positive manner and shun anything that would create conflict.
They commended Dakingari for the projects sited in their areas and further urged him to construct new official residence for them and allocate official vehicles to them to enhance their status.
Earlier, the governor said the state government had constructed a new road to link the community with their neighbours in Benin Republic to promote social and economic relations.
Kwara
The Hausa community in Kwara State has accused the
state government of marginalisation in the implementation of policies and programmes.
The head of the community, Alhaji Mukhtar Tawakalitu, told newsmen last Monday in Ilorin that majority of the members of the community were born in the state and deserved to be recognised as indigenes.
“We see Kwara as our state because majority of us were born here, grew up here, do our businesses here and married here,” Tawakalitu said.
He said members of the community had not benefitted from the administration of Gov. Abdulfatah Ahmed.

National Leader of the All Progressives Congress (APC),
Chief Bola Tinubu, on Monday described the party’s governorship candidate in Lagos State, Mr Akinwunmi Ambode, as one of the most brilliant minds in financial accountancy.
Tinubu spoke at the APC governorship campaign rally in Ojo area of the state, urging the people to give Ambode their votes in the Feb. 28 governorship election.
He said that Ambode was a credible candidate who should be given the chance to continue with the excellence for which Lagos was noted.
“Today we present one of the most brilliant minds in financial accountancy; one of the most intelligent in financial management.
“He is tested, trusted, capable, visionary and an achiever,” he said.
Tinubu said that Ambode performed well when he was the state’s Accountant-General.
“Lagos State progressed when Ambode was the state’s Accountant-General.
“You need creative, great, visionary leaders and an intelligent government to manage the economy.
“That is why a disciplined Buhari and a visionary Ambode will want to create a better economy for Nigeria,” Tinubu said.
Nasarawa

Most Rev. Mathew Audu, the Catholic Bishop of Lafia
Diocese in Nasarawa State, has condemned the alarming rate of divorce in Nigeria.
The clergyman voiced his displeasure in an interview with newsmen last Monday in Lafia.
He said that he was shocked to learn that the rate of divorce in Nigeria had risen to above 30 per cent yearly.
He expressed concern why couples quickly resorted to divorce.
He said that instead of preaching against divorce, some clerics were preoccupied with counselling new and old couples on ways of sustaining their love.
He said that the high rate of divorce was not a good development as the church does not permit divorce since it is forbidden by God.

Ogun
The Independent National Electoral Commission (INEC)
yesterday said it had distributed over 672,000 Permanent Voter Cards (PVCs) in Ogun State.
The Resident Electoral Commissioner in the state, Mr Timothy Ibitoye, said this in Ijebu-Ode, Ogun State, during a visit to Oba Sikiru Adetona, the Awujale of Ijebuland.
Ibitoye said the figure represented 50 per cent of the 1.22 million cards received for the registered voters in the state.
He said eligible voters yet to obtain their cards should be patient as the commission would distribute the outstanding cards before February 14.
Ibitoye, however, warned that the commission would insist on its policy of “no PVC, no voting.”
He said smartcard readers would be used at the general elections for accreditation of voters, adding that no one should be seen with more than one card.

The Ondo State Board of Internal Revenue said it gen
erated N13.2 billion from various internal sources in 2014.
Its Chairman, Mr Akinlolu Akinsehinwa. said this yesterday in Akure in an interview with newsmen.
Akinsehinwa said the board recorded success in 2014 because of its repositioning, dynamism and sensitisation.
“We made people see reason on tax payments and the infrastructure provided through tax.”
The chairman re-iterated the board’s commitment to generate more money through tax this year.
“We are looking into all remote areas for coverage and we will come up with some strategies and widen our scope to get more tax.
“At the end, we will get a lot of money and make the collection easy and convenient because tax payment is not meant to make life more difficult but better,” Akinsehinwa said.

The APC gubernatorial candidate in Sokoto State, Aminu
Tambuwal last Monday received 2400 supporters of the Peoples Democratic Party ( PDP) who defected to APC in Kebbi Local Government Area of the state.
Tambuwal received the defectors at the party’s gubernatorial campaign rally held in Kebbi town, headquaters of Kebbi Local Government Area of the state.
He called on the defectors to work towards promoting the lofty ideals of the party in the rural areas.
Tambuwal also called on the youths in the area to shun all kinds of violence by ensuring peaceful conduct of the forthcoming elections.
He said that the youths were a global catalyst for political development of any society, adding that they should be properly groomed to enable them contribute towards the socio economic and political growth of the country. 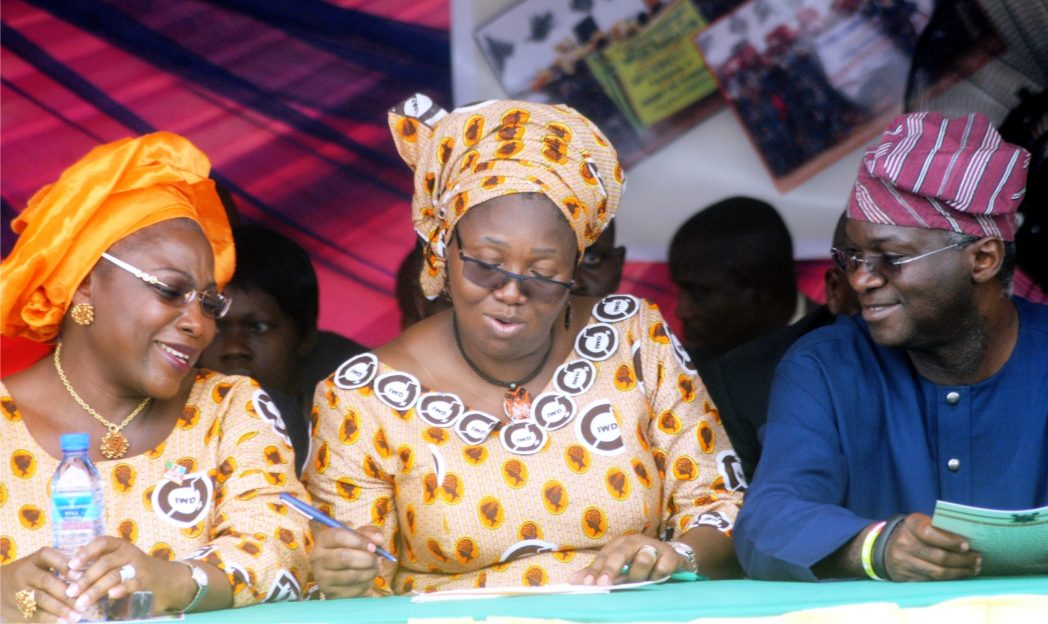 The National Population Commission, NPC, in Kwara State has cautioned stakeholders to refrain from undue interference in the second pre-test census exercise in the state.
The second pre-test census exercise is part of the preparations for the main census exercise billed to take place in May 2022.
Speaking at the opening ceremony of the training of supervisors and enumerators for the exercise in Ilorin yesterday, the NPC Federal Commissioner for the state, Malam Abdulrazaq Gidado, also charged stakeholders to allow field functionaries to carry out their duties professionally for a good outcome.
The Federal Commissioner appealed to state and local governments concerned, traditional institutions, and communities to support the commission in carrying out the second pre-test census exercise by allowing unfettered access to facilities and places to be enumerated.
He said the pre-test exercise will be carried out in four local government areas of the state, namely, Kaiama, Ilorin South, Offa and Oke-Ero.
The Federal Commissioner explained that pre-test census exercise is usually conducted before the actual census and primarily aimed at testing the census methodology, questionnaires, data collection methods, and manual for fieldwork among others.
He assured Nigerians that all necessary steps have been taken to ensure that the commission’s field functionaries are properly kitted and trained to observe all Covid-19 protocols throughout the period of the exercise as prescribed by the Presidential Steering Committee, PSC, on Covid-19.

Man Jailed 15 Years For Stealing 16 Phones, Other Items In Adamawa

A man in Yola, the Adamawa State capital, has been sentenced to 15 years imprisonment for breaking into houses and stealing 16 phones and other items.
Abdulazeez Adamu, 22, from Nasarawo, Jimeta, was found guilty by Chief Magistrate Court 1, Jimeta, which established that he, along with two cohorts now at large, committed the offence at Bekaji, another residential community within the Jimeta axis of Yola.
The court established that Abdulazeez and the others, while armed with weapons, stole a TV set, an HP laptop, and 16 handsets valued at N734, 000 from a number of residents in their houses, namely Rebeccah Samuel, Rhoda Chiroma, Wedelo Pwamboki, Walia Hamman and Mary Zaro, all residents of Bekaji who jointly reported the thefts to the police on 11th November 2021.
The accused was said to have run out of luck during one of the operations with his cohorts in Karewa extension when they hit a security guard with a cutlass and injured him.
The guard, Muhammad Umar, raised alarm which attracted the occupants and his colleague who was on duty in a neighbouring house and who rushed to the scene, but by which time the convict and his accomplices had fled.
He was later trailed and arrested by vigilantes who were mobilised for the purpose.
During the trial, the prosecutor, Seargent Galeon Nimrod of the Karewa Police Division, called Umar as a witness.
The witness narrated his encounter with Abdulazeez who, under cross-examination, said the witness told the truth.
Consequently, Adamu was jailed for 15 years with the option of N150,000 fine for the offence of theft in a dwelling house and was sentenced to six months in prison without an option of fine for being in possession of dangerous weapons.
He is also to pay N500,000 as a compensation fee.
Reading out the verdict, Chief Magistrate Abdullahi Mohammed Digil said, “This court has sentenced you, Abdulazeez Adamu, to 15 years or you pay an alternative fine of N150, 000, for theft and also sentenced you to six months imprisonment for being in possession of dangerous weapons without an option of fine.”