The National Association of Government Approved Freight Forwarders (NAGAFF) has said it would partner with the APM Terminals, Apapa, for better port operations and promotion of international trade.
This is contained in a statement on Saturday by Mr Dipo Olayoku, the Head of Media, NAGAFF Headquarters in Lagos, Saturday.
The statement said that the resolution was made after a facility tour of the terminal by a NAGAFF delegation, led by its Founder, Dr Boniface Aniebonam.
According to the statement, Aniebonam told the management of APM Terminals that NAGAFF’s visit is part of its agenda to establish corporate relationship with other major stakeholders in the sector.
It quoted Aniebonam as saying that the visit was part of the association’s mandate to assist in enhancing activities at the terminals for the benefit of terminal operators, importers and freight forwarders.
The statement said that NAGAFF was aware of the various challenges in the business climate in Nigeria.
It said that Aniebonam promised to use the channels of communication by the association to tell the government to redress the situation through dialogue, consultations and communication.
It added that the NAGAFF chieftain urged Nigerians doing business at the terminals to comply with due process, while the operators should create a customer-friendly environment for enhanced operations.
The statement called for the provision of shelter for freight agents and the establishment of a Customers Relations Department to bridge the gap between the company and the public.
It added that  the Chief Commercial Officer of APMT, Mr. Neil Fletcher  said the company’s management was impressed with the roles being played by NAGAFF as a stabilising factor in the industry.
The statement noted that Fletcher had earlier conducted the NAGAFF delegation round the terminals to the container shed, the truck park, as well as it new office block.
It noted that the APMT chief said that the company had invested about 330 million dollars in developing, upgrading and modernising its terminal.
It said this had made it (APM Terminals) the largest and busiest container terminal in West Africa.
According to the statement, to facilitate operations at the terminal, the company will take delivery of additional four Rubber Tyre Gantry (RTGs) cranes.
It said this would bring the number of RTGs in its fleet to 14.
The statement said that throughput (imports and exports) of the terminal was now one million TEUs (containers), while the average vessel waiting time was less than one day.
“Unlike the vessel waiting time of 30 days as was the case as at the time APM Terminals took over ,” it said.
It quoted Fletcher as saying the company had invested in both human and material resources and that it had facilitated activities in international trade and contributed to the nation’s economic growth. 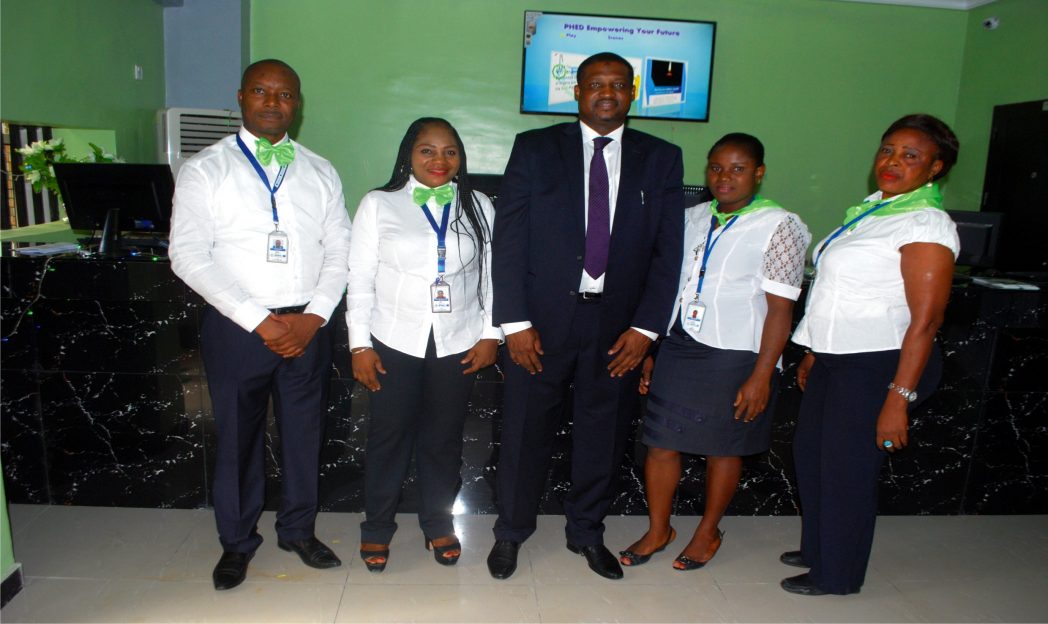 Dr Abba Ibrahim with the staff of PHED after commissioning of the new customers’ centre in Port Harcourt, recently.