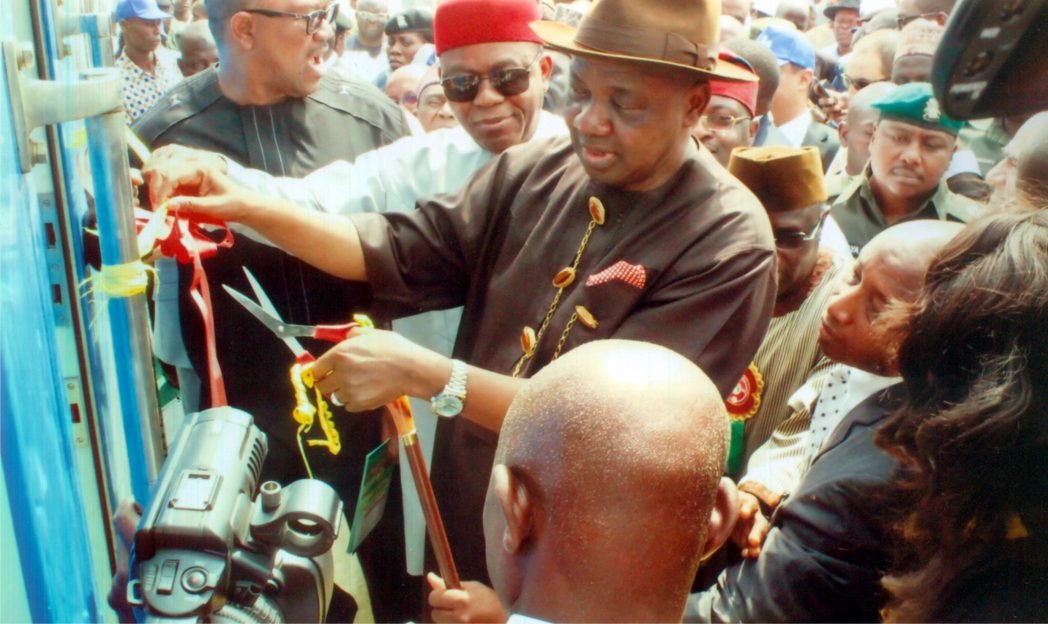 Governorship candidate of the All Progressives Congress, APC in Rivers State, Dr. Dakuku Peterside  has said that he will be governor of everybody the rich and the poor, the weak and the strong, Upland and Riverine, men and women, boys and girls; and  I will be servant of all”, if he is elected governor next year.
The APC governorship candidate made the declaration today at the official flag-off of Port Harcourt City Local Government Area rally at Liberation Stadium in Port Harcourt.
He promised to keep faith with his pledge and vision of a safe and secure state, massive infrastructural development, human capital development, empowerment, urban renewal, employment opportunities and promotion of tourism, adding  that all what  needs to be done for massive employment and wealth creation will be put in place  with a target to lift 500, 000 persons out of poverty in 4 years.
“We will massively industrialize the state”, he added.
Peterside said, “I am happy to be with you our dear people of Port Harcourt City, the only Garden City in Africa, and a melting point of different cultures. Today we have come to join your rally but I would want to use this opportunity to share our dream of making Rivers State greater. Fortunately for us, our leader and governor has done the right thing by laying a solid foundation for us.
He said, “Those who are challenging us have never told us what they will do. They only attack personalities. Please ask those who want to lead what they will do for us. Also ask them how they intend to take the state to the next level. I am here to share with you a message of hope, a message of togetherness, a message of prosperity, a message of wealth creation and a message of empowerment.
By the special grace of God, come May 29 2015 when an APC governor is sworn in, we will move into action immediately and we shall stand on our programmes. There will be security, rule of law, transparency, infrastructural development and we will support small and medium businesses to grow. We will not be like our opponents who at every opportunity close down your shops and businesses in the name of rallies.  We will respect our citizens because without you, we are not”, he said.
Speaking further, he said, we shall improve on what we have on ground. We will give opportunity to our people to grow in all spheres and to compete anywhere in the world. This is our road map to prosperity.
“I am also from that family tree known for fear of God, integrity, fairness, honesty, courage, broad-mindedness and transparency. Asita, my running mate and I are good family men also. We have our wives here and we care for the family. We must work to make sure that our children grow into responsible adults.  If you share in this vision, then you must support APC. I assure you that I will bring to government, those good qualities Governor Amaechi is known for. So please don’t entrust the lives of our people into the hands of rascals who have no programme for our future”, the governorship candidate stated.
While, Rivers State Governor and Chairman, Nigerian Governors’ Forum (NGF), Rt. Hon. Chibuike Rotimi Amaechi, says winning the 2015 elections is a task that must be accomplished.
Governor Amaechi said this,  when he inaugurated the Campaign Organization of the All Progressives Congress (APC) for the 2015 General Elections in Port Harcourt, Monday.
Represented by his deputy, Engr. Tele Ikuru, the Governor stated that “winning the 2015 elections is a task that must be accomplished, charging the members to hit the ground running, stressing that “you have been selected based on high recommendations as to your ability and performance. We depend on you to deliver”.
The Campaign Organization has the State Commissioner for Works, Chief Victor Giadom, as Director General while the Chairman of the State Post Primary Schools Board, Hon. Allwell Onyesoh is Deputy Director General.
Members of the organization are: Dr. Dawari George Secretary and Director of Administration and Finance, Hon. Lolo Ibieneye, Chief Campaign Strategist Marcus Nle Eji, Chief Political Adviser to the organization; Emmanuel Deeyah, Director, Special Outreach Mrs Ibim Semenitari Director, Communications Emmanuel Chinda Director, Field Operations/Rally Coordination Hon. Oji Ngofa Director, Mobilisation/Voters Coordination Mr. Udi Odum, Director, Protocol/Advance Mr. Abiye Amakiri Director, Policy Mr. Levi Charles Gogo Director, Research/ Strategy and Surveys Hon. Chidiebere Okwuwolu Director, New Media/IT, Barr. Ezemonye Ezekiel-Amadi, Director, Election Operations/Special Duties, Mr. Ade Adeogun, Director, Security Barr. Chuma Chinye Director, Volunteers/Civil Societies, Chief Nnamdi Okere, Director, Transport and Logistics, Mr. George Feyii, Chairman, Fundraising Special Committee Chief Cyprian Chukwu, Chairman, Special Committee on Legal Matters, Beke Anyalewechi, Senior Advisor, Media, and Sylvester Asoya, Special Assistant, Public Affairs.
In his acceptance speech, Director General of the campaign organization, Chief Victor Giadom, thanked the party leadership for finding them worthy to be saddled with such high responsibility, assuring that the members would work together to ensure the success of the party in the various elective positions come 2015.