Bauchi
Dry season farmers in Gamawa Local Govern
ment Area of Bauchi State have commended the member representing Madaki Gololo (PDP-Gamawa) for providing inputs to his constituents.
The Chairman, Rice Famers Association of Nigeria (RIFAN) in the area, Malam Abdullahi Usman gave the commendation in an interview with newsmen in Bauchi.
“Our farmers are interested in dry season farming, but the issue of inputs has remained our greatest challenge.
“We cried out to the member and he supported us with 187 irrigation water pumps and also dug 187 wash-bows in various clusters across the local government area.’’

Benue
Bishop Nathan Inyom of the Anglican Commun
ion, Makurdi, Benue State, has called on the Federal Government to develop a peace policy to facilitate effective management of crises in the country.
The Bishop made the call in an interview with newsmen in Makurdi.
Inyom said that without a policy document detailing crises management of issues, it would be difficult to contain the recurring crises in the country.

Ekiti
A Nutritionist, Mrs Cecilia Dolapo, says people
who eat cashew fruits or nuts regularly are less likely to develop cancer-related diseases.
Dolapo said this in an interview with newsmen in Ido, Ido/Osi Local Government Area of Ekiti.
According to her, cashew nuts are ripe with proanthocyanidiusi, a class of flavanois that can starve tumour and stop cancer cells from dividing.
She said that the intake of the nut, which is  kidney-shaped seed, was also good for people who want to lose weight.

FCT
Minister of State for Foreign Affairs 1, Prof.
Viola Onwuliri, and the Cuba’s Foreign Minister, Bruno Parilla, have pledged to work towards expanding economic and trade cooperation to attract tangible benefits to both countries.
The two ministers made the pledge while speaking in Abuja at a reception organised by Nigeria’s Foreign Ministry for the visiting Cuban Minister who concluded his four-day official visit to Nigeria recently.
Onwuliri said that economic cooperation was “heartening’’ because of the socio-economic reforms taking place simultaneously in both countries.
She suggested that priority should be given to cooperation in the areas of medicine, pharmacy and education in the renewed efforts to expand economic ties between both countries.

Jigawa
The Gumel Local Government Area of Jigawa
State  says it has spent about N4 million on water equipment for the people of the area.
The council Chairman, Alhaji Alasan Babandi, made this known in an interview with newsmen in Gumel.
Babandi listed the equipment to include 17 submersible pumps, pipes and hand pumps, among others.
He said that the equipment had been installed at Galagamma, Dahiru Atta Primary School and Prison Quarters at Gumel town for utilisation.
Kano
A Kano State High Court has sentenced four per
sons to 84 years imprisonment for armed robbery.
Monday Joseph, Umar Adamu, Simon Chile and Mukhtar Adamu, were convicted for robbing A. A. Rano Tudun Wada filling station in 2012.
The convicts had in December 2012 attacked the Assistant Manager and some staff of the filling station, and carted away N2.68 million during the operation.
Delivering judgement recently, Justice Nura Sagir said that each of the convicts would serve 21 years in prison.

Kebbi
The Kebbi State Government says it will soon revive
its four moribund companies to attract investors and generate employment for the youth.
Chairman of the Committee on Resuscitation of Moribund Industries, Alhaji Usman Mhammed, made this known to newsmen in Birnin Kebbi.
According to him, the companies are Neem Seeds Processing Plant, Transformer Manufacturing Company and the Cassava Processing Plant.
He said modalities were being worked out to also revive the Kitchen Wares Factory.

Kogi
The Chief Judge of Kogi State, Justice Nasir Ajanah,
has released four awaiting trial inmates and granted bail to one for unjust and illegal incarceration at the Medium Security Prison, Kabba.
The beneficiaries included Joseph Kashuwa, Safiu Lawal, Isiaka Mohammed and Mohammed Tambuyah while Mohammed Haruna was granted bail.
Ajanah said the continuous incarceration of Kashuwa was unjustifiable as the Director of Public Prosecution (DPP) had issued an advice for his release in November last year.
He said the DPP had said there was no prima facie case established against him.
Lagoss

The National Orientation Agency (NOA) in
Nasarawa State, said it had deployed its staff to rural areas to sensitise people ahead of the March 22, local government elections in the state.
The acting state Director of NOA, Mr Elisha Iyakwari, told newsmen in Lafia that this was part of the agency’s preparatory efforts for  free and peaceful local government polls in the state.
Iyakwari said the agency’s aim was to take the campaign to rural communities in the state to further re-orientate the people at the grassroots on the forthcoming polls.
”We have deployed our members of staff to villages, market squares to carryout voters education and to sensitise the people on their civic responsibility ahead of the Local Government polls.

An Osogbo Grade II Customary Court has dis
solved the 15-year-old marriage between Mutiat Asimiyu and her husband, Saheed over constant beating.
In his judgment, the President of the court, Chief Bolarinwa Popoola, dissolved the marriage and held that the marriage was problematic with accusations and counter accusations bordered on distrust.
“The court, hereby, dissolve the marriage in favour of the petitioner,” he held.
Popoola awarded custody of two children, aged 12 and 10 to the father, while custody of the four-year-old child was awarded to the petitioner.

A Chief Magistrates’ Court in Iseyin, Oyo State
has sentenced a middle-aged man, Ganiyu Saheed, to nine months in prison with hard labour for stealing from a widow.
Delivering judgment, the Chief Magistrate, Mrs Abiola Richard, sentenced Saheed, after he pleaded guilty.
Richard, who did not give the convict an option to pay a fine, said that the sentence would serve as deterrent to others who engaged in such nefarious acts in the society.
The prosecutor, Inspector Friday Sule, had on January 21, told the court that the convict committed the offence on December 4, 2013. 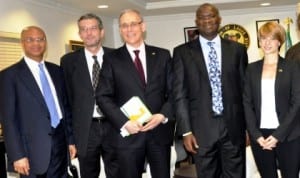 Participants At Experience-Sharing Workshop On Child Marriage In Kaduna

The Kaduna State Government has reiterated commitment to end child marriage by improving access to education, food security and economic growth.
The Acting Governor of the state, Hadiza Balarabe said this at the inauguration of a two-day experience-sharing workshop on child marriage in Kaduna yesterday.
She said child marriage has been identified as one of the key challenges affecting northern part of the country which portends negative consequences on education, sexual and reproductive health.
According to her, child and forced marriage are harmful and a violation of human rights, stressing the need to change the narrative towards ending the menace in the country.
“This will require that we terminate the root cause of the problem which has been proven that it will evolve, leverage and harmonise instrument of law; and will need the good intending of leaders, all socio-cultural institutions and stakeholders,” she said
Balarabe said the state government accorded premium to human capital development as panacea to the root cause of the social problem, adding that government had introduced 12-year free and compulsory education for all in the state.
She said,  “many girls in the northwest often got married before the age of 18 which called for concern.
“While some are between 15 years and taken out of school and become pregnant with complications due to long labour and undeveloped pelvic”.
The Kaduna state Commissioner for Human Services and Social Development, Hajiya Hafsat Baba described child marriage as a global issue and harmful practice to the society.
She advised parents and guardians not to push children under the age of 18 to early marriage, adding the practice caused devastating end to the life of a child.

The Director-General, Standards Organisation Of Nigeria (SON), Mallam Farouk Salim, has said for Nigeria to curb the menace of substandard products, the nation must surmount the challenge of low disposable income that drives purchase of substandard products.
Salim stated this during the 50th Anniversary Celebration of SON in Abuja, Monday.
Salim, who identified the challenge of foreign trade policy of some governments that actively encourage exportation of substandard products said “while acknowledging the modest achievements and strides of SON in the last 50 years, my vision for the organisation in the next 50 years is to be the foremost standardised body in Africa and among the top ranking globally.

“While this vision is achievable, the organisation will need to surmount several challenges such as changes in government policies like the often removal of the organisation at points of entry. Huge population growth with limited resources giving rise to communal restiveness.
“Limited research and development activities to keep pace with rapid innovation in the society; the likelihood of harsh weather and increased natural disaster occasioned by global warming; increase in litigation against activities of the organisation”.
He continued, “to mitigate the expected challenges, we need to evolve as a dynamic and innovative body, investing in the following critical areas: efficient workforce with the required skill set, cutting edge technology, appropriate and strategic infrastructure, and enhanced meaningful collaboration with stakeholders”.
In her keynote address, the Minister of State for Industry, Trade and Investment, Amb. Maryam Katagum, said SON played a crucial role in the implementation of the African Continental Free Trade Area, AfCFTA.
Katagum assured the Organisation of the Ministry’s continued support in achieving this feat.

FG Recommits To Lift 100m Out Of Poverty

Minister of State for Power, Goddy Jedy-Agba has reiterated the Federal Government’s determination to lift 100 million Nigerians out of poverty by 2030 through its Energy Transition Plan (ETP).
Jedy-Agba disclosed this at the 2022 Nigeria Energy Forum Day 2, Virtual Edition, held in Lagos, Monday .Earlier at the Day 1 physical event, President Muhammadu Buhari had unveiled government’s plans to lift 100 million Nigerians out of poverty by 2030.
The Permanent Secretary, Ministry of Labour and Employment, Ms Kachollum Daju, said this when she addressed newsmen in Abuja.
According to the Minister, ETP will lift about 100 Nigerians out of poverty and drive economic growth of the country.
“It will also bring modern energy services to the full population and managing the expected long-term job loss in the oil sector due to global decarbonization.
“The plan focuses on the rapid build out of sustainable energy systems to tackle energy poverty in the nation,” the Minister said.
He said in designing the plan, key targets from relevant policies and initiatives such as the 2020 Economic Sustainability Plan, the Nigeria Electrification Project, the National Decarbonization Programme and the Presidential Power Initiative was employed.
“The ETP is geared towards low-carbon development of Energy systems across 5 key sectors; Power, Industry, Cooking, Transport, and Oil and Gas.”
Jedy-Agba said the plan had been approved by the Federal Executive Council and adopted as National Policy.
“An Energy Transition Implementation Working Group (ETWG) has been established to drive the implementation of the ETP along with key International Partners.
“The ETWG is chaired by Vice President Yemi Osinbajo and comprises of several key ministers, including the Ministers for Environment, Finance, Works and Housing, Petroleum Resources, Foreign Affairs and Power.
“The Working Group and its secretariat, the Energy Transition Office, have been engaging with in-country stakeholders, development partners, financiers and the international community for the delivery of the plan,” he said.
He said the ETP analysis shows that delivering Nigeria’s net-zero target requires 1.9 trillion dollars spending up to 2060, including 410 billion dollars above business-as-usual spending.
Speaking on the plan, the Team Leader, Green Economy Co-operation Section, EU Delegation to Nigeria and ECOWAS,  Ms Inga Stefanowicz, said Nigeria was not standing aloof on the ongoing transition.
According to her, EU will contribute some 400 million Euros worth of projects and programmes to the ETP.
“This amount may seem modest when compared with the needs and the ETP estimates, but it is also the role of our funds to act as catalysers of change, reforms, private sector and international development finance investment.
“We are proud to have achieved such positive spillovers for Nigeria already and we look forward to working together more,” she said.