The Central Bank of Nige
ria (CBN) has said it has concluded plans to partner with Nigerian Communication Satellite (NIGCOMSAT) for the provision of wireless internet service.
The CBN Principal Manager, Shared Services, Mr Aaron Yaduma, said that the measure was to give necessary push to cashless policy in the country, last Tuesday.
Yaduma made this known in a paper titled: “Cashless Policy, the Journey So Far”, presented at a three-day sensitisation workshop on CBN cashless policy in Bauchi on Tuesday.
He said that the effort was to address the internet connectivity problem, being one of the major challenges affecting the implementation and penetration of the cashless policy in the country.
“A tripartite MoU has been drafted for NIGCOMSAT, CBN and Nigerian Interbank Settlement System (NIBSS) for the provision of the Wi-Fi hotspots.
“If the partnership arrangement is concluded, we hope to connect every part of this country with internet service via Wi-Fi hotsport.
“We have already commence discussion with NIGCOMSAT to see how we can make General Packet Radio Service (GPRS) technology available in rural areas for the deployment of Point-Of-Sales (POS) terminals,’’ he said.
Yaduma said that the cashless policy was introduced in 2012 with the main objective of reducing the amount of physical cash circulating in the economy through the encouragement of more electronic-based transactions.
He said that the policy was introduced for a number of key reasons, namely to meet Vision 2020 requirements, modernise Nigeria’s payment system and reduce the cost of banking services.
According to him, it is also to improve effectiveness of monetary policy, reduce high security and safety risks and foster transparency and curb corruption.
He said that besides internet connectivity, people misconception of the policy and fuelled conspiracy theories amongst stakeholders had also hampered the adoption of the policy.
“There was also resistance due to prevailing cash culture, Techno-fobia , Illiteracy, entrenched poverty, insufficient infrastructure, distrust in banking system and merchant apathy, “ he said.
He, however, said that steps were being taken to address all the challenges, adding that the cashless Nigeria project was gaining massive adoption rate across the nation, especially with the support from Federal and State governments.
Earlier, the CBN Branch Controller in Bauchi State, Malam Musa Muhammad, explained that the essence of the workshop was to sensitise and educate all stakeholders on the gains of the cashless policy.
He added that the sensitisation would also be carried out in 30 states of the federation where the policy was designed to take effect.
He called on the government, markets associations, community leaders, professional bodies, religious organisations, students to embrace the policy for its advantages.
Some of the participant who spoke to newsmen expressed worry that the policy will not favour a lot of people due to low level of education and access to electronic gadgets.
Mrs Maryam Gamzo, the Chairperson, Market Women and Men Association in the state, said the policy would be at a serious disadvantage to market women because of their low level of literacy.
“Our women only understand the business of pay cash and carry, and now they are telling us to use machines instead of cash. Without money how are we going to buy goods from the villages.
“Again, if our customers stopped using money to make purchases, how do we know if we are making profit or not and what do we take home at the end of the day,’’ she said.
Another participant, Malam Yakubu Bayara said that the policy would only succeed in major towns and not in the rural areas.
According to him, in the rural areas the purchasing power is between N20 to N200 per day, and the illiteracy figure is very high. 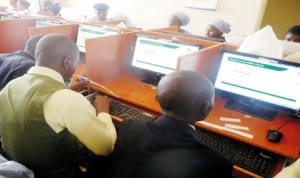 Some of the students during the advocacy campaign on computer-based test organised by the Joint Admissions and Matriculation Board (jamb) ahead of its Unified Tertiary Matriculation Examinations (umte) in Gombe, recently. Photo: NAN

A Kaduna-based Information Technology organisation, Ihifix Technologies, has inaugurated a citizens’ demand website and mobile application to deepen Open Government Partnership (OGP) in Kaduna State.
The application website, https://citizensdemand.org/ was inaugurated in Kaduna, during the Ihifix Digital Summit for Development, with the theme, “Leveraging Digital Technologies for Sustaining the Gains of OGP”.
The Tide Source  reports that the summit was organised in collaboration with Coalition of Associations for Leadership, Peace, Empowerment and Development (CALPED) and OGP Technical Working Group on Citizens Engagement.
The event was supported by the Partnership to Engage Reform and Learn, a governance programme of the United Kingdom Foreign, Commonwealth and Development Office (FCDO).
The Ihifix Team Lead, Mr Emmanuel Adikpe, explained that the website and mobile application were designed in partnership with CALPED to enable citizens to upload their needs with a view to inform the budget.
Adikpe said applications developed in line with the principle of OGP, were intended to deepen citizens engagement in governance by ensuring that their voices were heard, and needs captured in the state budget.
According to him, citizen participation is critical in ensuring transparency and accountability in governance and a key attribute of good governance, critical to Nigeria’s development.
He also explained that the effort was to deploy digital technology to deepen citizens’ engagement in the governance process, particularly the Community Development Charter (CDC).

Nigerian Communications Satellite Limited (NIGCOMSAT) says  plans are underway to deploy 5G,  using a new satellite known as NIGCOMSAT 2.
It also said the NIGCOMSAT 2  would be launched into orbit by the first quarter of 2023 to enhance coverage.
Managing Director of NIGCOMSAT,  Dr Ambibola Alale, made this known at a stakeholders engagement forum organised by the agency in Lagos recently.
He informed that the satellite would backhaul the services of 5G once telecom operators deploy the fifth generation network services.
In his view, the backhauling meant getting data to a point which could be distributed via the optic fibre or network.
Alale also disclosed that the government planned to provide 70 per cent broadband by 2025, and that NIGCOMSAT would keep working with other technology providers to be able to deliver broadband services to all Nigerians.
The Deputy General Manager, Satellite Control and Operations, NIGCOMSAT, Dr. Anthony Orjinta, during a panel discussion,  said satellite had always been supporting all GSM operators.
“Satelite has always been serving areas that are underserved, because we all know that the cost of deploying terrestrial sites is quite expensive, but fibre deployment is even more costly due to our environment.
“As the 2G, 3G, 4G technologies are evolving, so also are the technologies in the satellite industry.The enhanced capacities that are available in other technologies are also coming along in the satellite space”, he said.
Orjinta stated that originally when the telecom industry started, Nigeria only had voice calls but with evolution, things changed.
He explained that NIGCOMSAT was in the process of launching a new satelite which would be one of the first in Africa and a deal breaker .
Accordingly,  he  has revealed that the satellite would provide back haul services for all 5G operations, while simultaneously delivering services of the same comparative capacity to underserved areas and dark spots that were not economically viable for terrestrial operators.
He also hinted that terrestrial operators would not want to deploy 5G in areas that are not profitable.
“We have had situations where companies put in terrestrial traffic data locations and actually took them off because they were not making enough money”, he said.
The theme of the event was “NIGCOMSAT: The Roadmap for Enhanced Service Delivery”.

A University Teacher, Don, Prof. Jacob Aweda,  of the Department of Mechanical Engineering and Technology, University of Ilorin (UNILORIN), has designed and evaluated  what he called the ‘Jominy End Quencher’ apparatus for the determination of hardenability of steel materials.
Aweda  disclosed this during his paper presentations at the 217th inaugural lecture of the institution titled, “Engineering Technology and Manipulation of Process Parameters”, in Illorin recently.
According to the Don, Hardenability of steel was the property of material that determines the depth of the hardness of material when cooled in a desirable quenchant from its austenising temperature.
The scholar, who lectures in  the Faculty of Engineering and Technology, explained that this was measured through the determination of the depth of hardness of the standard size and the shape of the steel in a controlled standardised environment, which the apparatus was used for.
He noted that in many research centres and tertiary institutions, appropriate testing equipment were either not easily available or obsolete.
“Added to this is the cost of testing, which is enormous, charges are high where necessary equipment are available.This may probably be due to high initial cost of procurement and high cost of maintenance of such equipment.
“If access to research equipment is readily available and at  an affordable cost, the risk of travelling long distances and paying so much for material evaluation will reduce.
“Currently, due to the  non-availability of required laboratory equipment, many researchers  send  test samples outside the country resulting in the reduction of the number of samples required for testing, which may not be a good representative of the overall result,” he said.