Manchester United’s Champions League campaign is in serious peril after they were comfortably beaten by Olympiakos last night in the last-16 first leg in Athens.
United, who registered only one shot on target, fell behind when Alejandro Dominguez diverted home Giannis Maniatis’s effort before the break.
Arsenal loanee Joel Campbell’s precise shot doubled the lead and the visitors only came to life late on.
Robin van Persie blazed over the top when they finally opened up the Greeks.
Out of both domestic cup competitions and comfortably adrift in the Premier League title race, United manager David Moyes spoke boldly this week of claiming Europe’s top prize.
The message did not appear to get through to his players on a night of toil in Piraeus.
An instinctive 38th-minute flick from the excellent Dominguez gave Olympiacos a deserved lead before on-loan Arsenal forward Campbell ensured they will protect an two-goal cushion at Old Trafford on March 19th.
The visitors badly lacked a creative spark, with Moyes’ decision to employ Antonio Valencia and Ashley Young in the wide midfield positions, while leaving Adnan Januzaj and Shinji Kagawa on the bench sure to come under the spotlight.
Nevertheless, the embattled former Everton boss should have had his blushes partially spared when Robin van Persie passed up a glorious late chance.
Top scorer Kostas Mitroglou’s January departure to Fulham and a thigh injury suffered by seasoned forward Javier Saviola left 21-year-old Nigerian Michael Olaitan to lead the Olympiacos attack.
In Russia, Borussia Dortmund took a giant stride towards the Champions League quarter-finals with a comfortable last-16 first-leg win at Zenit St Petersburg.
Dortmund made a rapid start as Henrikh Mkhitaryan swept in a loose ball after a dangerous run from Marco Reus, who cracked in a second 77 seconds later.
Oleg Shatov’s low second-half shot gave Zenit hope, before Robert Lewandowski drilled in Dortmund’s third.
Hulk’s vicious penalty reduced the gap, only for Lewandowski to pounce again.
The Poland striker, who will move to Dortmund’s arch rivals Bayern Munich in the summer, ensured the German side have a healthy – and fully deserved – two-goal advantage heading into next month’s second leg.
Jurgen Klopp’s team have struggled in the Bundesliga this season, with the weekend’s 3-0 defeat at lowly Hamburg leaving them 20 points adrift of leaders Bayern.
Dortmund looked intent on making amends for their Bundesliga troubles and constantly threatened to hurt Zenit with swift and penetrating counter-attacks.
They were helped by some rusty defending from the home team, who had not played a competitive fixture since 11 December because of the mid-season Russian break. 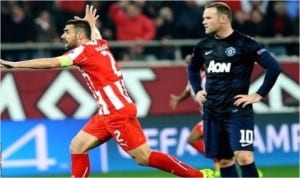