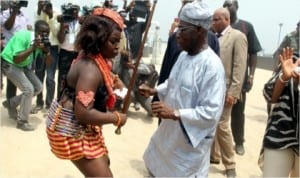 Ex-President Olusegun Obasanjo shows his stuff as he dances with an Iria dancer in Buguma, during his two-day visit to Rivers State