The Abia Police Com
mand has re-assured the residents that there will be no resurgence of kidnapping and other violent crimes in the state.
The Police Public Relations Officer in the state, Mr Geoffrey Ogbonnaya, gave the assurance recently in Umuahia in an interview with newsmen.
Ogbonnaya said that the command had very solid strategies on ground to curtail kidnapping, armed robbery and other crimes in the state.
‘’We are very much on top of the situation. We are working round-the-clock to ensure that the state does not relapse to the days of insecurity,’’ he said
He explained that the new policy of visibility policing had made it difficult for hoodlums to operate in the state, noting that Abia remained one of the safest states in the country.
On Sunday’s kidnap of a Chinese national in Aba, Ogbonnaya said that the command immediately swung into action when it received the report.
It would be recalled that the Chinese, Tang, who is married to a Nigerian, Mr Christian Kalu, was abducted by gunmen on her way home, in the company of her husband.
‘’When we got the report of the kidnap, we swung into action and we got a piece of information which resulted in her rescue and arrest of the suspects,’’ he added.
He said that the police also rescued a man, who is the manager of a farm belonging to former Deputy Governor of Abia, Acho Nwakanma.
The man was also kidnapped in Aba last Sunday.
Ogbonnaya said the high rate of child theft and trafficking in the state in 2013 had been reduced to the barest minimum.
He said that the command devised a new strategy that helped in checkmating the hydra-headed monster.
He commended Abia residents for cooperating with the command in fighting crimes and urged them to continue to volunteer useful information to the police.
Meanwhile, the new Police Commissioner for the state, Mr Adamu Ibrahim, has resumed duty.
Ibrahim, the former Deputy Force Secretary, Police Headquarters, Abuja, replaced Mr Tili Abubakar, who is currently attending a course at the National Institute for Policy and Strategic Studies, Kuru, near Jos. 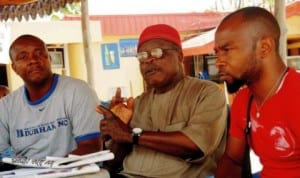