The Federal Government has said it will not scrap the Joint Admissions and Matriculations Board (JAMB), as well as the National Examinations Council (NECO), despite speculations making the rounds in recent days that the examination bodies will be scrapped.

The Presidency said yesterday that the Minister of Education, Prof Ruqayyatu Ahmed Rufa’i, will announce government’s position before next Monday.

The Presidency’s clarification on the examination bodies was announced by the Senior Special Assistant to the President on Youth and Student Matters, Comrade Jude Imagwe.

Imagwe, who represented President Goodluck Jonathan at the event, explained that the Federal Government was studying the White Paper submitted by the Steve Oronsaye-led committee.

He said the Presidency, last Monday, convened a special meeting, comprising Vice Chancellors from public and private universities, the National Association of Nigerian Students (NANS), as well as some top government functionaries, and took the decision.

The President’s aide said because both bodies are government’s babies, the government would nurture them to maturity rather than scrap them.

According to him, since NECO and JAMB were established through an Act, it would be wrong of the government to scrap them without recourse to the laws that set them up.

He said: “there is a panel that was constituted by the government to look into the White Paper that was presented to the Federal Government. When White Papers are presented, they are mere recommendations.

“When the government studies it, it comes out with its own positions. But there was a misrepresentation in the media that the government had concluded plans to scrap NECO and JAMB.

“Just on Monday, we had a meeting on this same issue. The president of NANS and his secretary were there. Vice chancellors of some private and public universities were also represented. I can tell you categorically that a position is going to be made public soonest.

“The minister of education will address the public on government’s final position before Monday. We must remember that these are organs enacted by an Act. So, it is not that the government will just wake up one day and scrap them.” 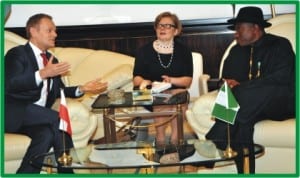 President Goodluck Jonathan (right),with the Prime Minister of Poland, Mr Donald Tusk, during a meeting, at the Presidential Villa, in Abuja yestreday.