Speaking at the State House, Abuja, where he was scheduled to attend a botched presidential committee meeting to intervene in his state’s dispute with Bayelsa State, Amaechi said no right-thinking human being would leave a party as large as the PDP for a fledgling party.

“I am still in the PDP. I am a member of the PDP,” he said. “PDP is the only national party in the country for now. Why will one want to leave a national party and go to another party?”,he queried.

He also employed the opportunity to debunk allegations of purchasing aircrafts to facilitate the realisation of his interests in the 2015 elections. Rather, he explained that the state government purchased the aircrafts, after securing federal government approval, to improve security surveillance in the state.

He described the newspaper that published the story as an unpopular paper that should not be allowed to gain cheap popularity by publishing untrue news about prominent Nigerians.

“The truth is that the Federal Government gave us approval to buy helicopters to fly around Rivers State for the purpose of security and we have done that,” he said.

“Up till now, they have not allowed the helicopters to come in. Maybe they are afraid that it is for 2015. Please help us beg them on behalf of Rivers State that we need the aircrafts to be able to secure the people of the state.

Amaechi questioned the possibility of aiding a political campaign with aircrafts, saying:

“How will you use what is in the hands of Nigerian security to campaign? You see the mischief? The helicopter is to ensure that Rivers State is under watch for 24 hours. It has cameras, so if somebody is committing a crime, we are seeing it.

”You can see a lot of mischief. As usual, people will try to dent your image to show that this man is not as transparent as he claims after all. We have argued about the first aircraft we bought; that is no longer a story. We did not buy two jets.” 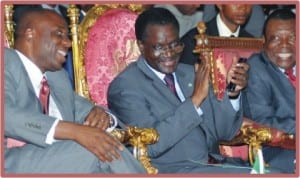