The Commissioner for Works, Chief Victor Giadom disclosed this yesterday in Port Harcourt while responding to a question on the state of the road by a participant at the inauguration of the state Peer Review Mechanism (SPRM), an initiative of the Nigerian Governors Forum.

Chief Giadom explained that contract for the road project had already complied with the public procurement law otherwise called due process.

He assured that all the legitimate processes involved in the project had been completed, and reiterated the commitment of the state government to construct the road to ease the suffering of the residents of the area.

The Secretary to the State Government, Mr George Feyii, debunked insinuations in some quarters that the programme was staged to give the impression that government was doing a lot, stressing that the conference was initiated by the Governors Forum to sensitise people on the benefit of the Peer Review Mechanism that had become a global phenomenon.

Also speaking, the state Head of Service, Mrs Easther Anucha, lauded the Nigerian Governors Forum for initiating a process that would bring about better service delivery and engender good governance in the country.

In his welcome remarks, the Commissioner for Budget and Economic Planning, Mr Gogo Levi Charles said the sensitisation and initiation of the state Peer Review Mechanism (SPRM) by the Governors Forum would enhance  participation of citizens in governance structure and process.

Mr Charles noted that the exercise would engineer healthy competition among state governments in the federation as they exchange experiences in virtually all sectors of the economy through the programme.

The programme continues today with Governor Peter Obi of Anambra State presenting a keynote address with other governors in attendance. 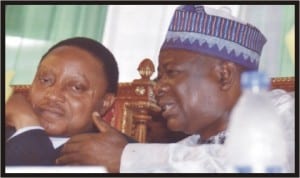