An estimated 232 people were in the early hours of yesterday burnt  beyond recognition, while several others with different degrees of injuries were rushed to Ahoada General Hospital and private clinics within the area for emergency treatment following a petrol tanker fire.

Also burnt were 22 motorcycles, a bus, and personal property worth thousands of naira, but the Oando filling station within the vicinity was spared.

The Tide gathered that the incident occurred at about 6.30 am, when a Hiace Bus with registration number XZ 613 AGC, Lagos, loaded with passengers while trying to overtake, a  Toyota Corrola car with registeration No RQ 218 AAA Delta, hit it at the rear, which made its driver to lose control.

The tanker driver loaded with fuel  which was coming in the opposite direction apparently saw the Toyota driver , struggling with the steering and while trying to avoid a head-on collision, ran into a ditch, and tumbled.

Villagers around the area, on getting wind of the incident, rushed to the scene to scoop the fuel inside the tanker, but a phone call placed by one of them, inviting his friends to come for the “free fuel” which was believed to have ignited the inferno.

When The Tide visited the scene, thousands of sympathisers were  seen weeping for the loss of their loved ones, while members of the Police Force,  Joint Task Force (JTF), Federal Road Safety Corps, and Nigeria Civil Defence and Security Corps were there controlling traffic and evacuating the victims.

The arrival of Rivers State Fire Service, one hour later could not savage the situation.

Ahoada General Hospital, Gbeye, Zion and Okpedem clinics were fully booked with the victims, while those whose conditions were critical were referred to either  Braithwaite Memorial Specialist Hospital  or University of Port Harcourt Teaching Hospital (UPTH) for emergency treatment.

The Rivers State emergency medical ambulances numbering over 10 were also seen evacuating the injured, but the charred bodies of those burnt were still left scattered around the vicinity.

The FRSC Commander in charge of Ahoada zone, Mr Amadi Adedoyin, who was also at the scene attributed the incident to impatience on the part of  the Hiace driver, saying that villagers acted in bad faith for trying to scoop fuel without minding the dangers involved.

However, both the Area Commander of Police in Ahoada zone, Mr Mike Okoli and Sector Commander of JTF, Lt. Col NS Idris, who expressed shock at the magnitude of the incident, however, appealed to people to stop illegal dealings on petroleum products because of its inherent danger to both humanity and the environment.

The Federal Road Safety Commission said yesterday it had recovered 95 bodies from the area where a tanker burst into flames at  Okogbe, Rivers  State.

FRSC Sector Commander for Rivers State, Kayode Olagunju, said the bodies were recovered as at 11.45a.m at the village, 11 kilometres from Ahoada-Mbiama, in Ahoada West Local Government Area.

According to him, four vehicles, including the tanker, were involved in a crash early yesterday, but the tanker caught fire when the people rushed for “free fuel.”.

Sources told The Tide that the fuel tanker was reported to have broken down overnight on a road in the area and was gushing fuel.

A large crowd of people reportedly gathered around the tanker, scooping fuel leaking from the tanker. According to an eyewitness, while the scooping of fuel was on, the tanker exploded.

The fire that broke out from the explosion consumed scores of persons at the spot.

The spokesman of the Rivers State Police Command, Ben Ugwuegbulam, who confirmed the incident, said that “early this morning, a tanker loaded with petrol fell in Okogbe and people trooped to the scene obviously to scoop the spilled fuel, and suddenly there was fire, resulting in casualties.”

In a statement, the National Emergency Management Agency (NEMA) gave the same figures.

The Tide learnt that many of those killed were commercial motorcycle operators, known locally as Okada, who raced to fill up their tanks after learning of the crash.

Olagunju said at least 34 motorcycles were destroyed in the blaze.

Motorcycle rider, Kingsley Jafure said the vehicle collision occurred at roughly 6:00 am, and the spilled petrol caught fire about 90 minutes later, but that time sequence could not be immediately confirmed by officials.

“At about 7:30 while I was inside trying to decide whether to go (scoop fuel) or not, that was when I saw that the tanker exploded,” Jafure said.

The area had been cordoned off by security forces and a large number of rescue officials were on the ground.

The NEMA statement said “rescue workers from the police, road safety, fire service, civil defence and NEMA were at the scene to evacuate victims and control the traffic.”

Major accidents, often involving large-haul trucks, are common in Nigeria, where many of the roads are in terrible condition.

Lorries operating on the country’s roads are often old and poorly maintained and road worthiness checks are scant.

Abandoned trucks, some of them destroyed by heavy collisions, can regularly be seen along major Nigerian motorways.

In March, a petrol tanker caught fire after skidding off the road in southern Port Harcourt, killing six people and injuring several others.

While in April last year, a fuel tanker overturned at an army checkpoint in central Nigeria, sparking an inferno in which some 50 people were killed.

But the Traditional Ruler of the Igbuduya clan in Ekpeye, Ahoada West, His Royal Highness,Eze Joshua Eyiba said the victims were not scooping fuel but helping accident victims who were trapped in the bus.

He blamed the Federal Government for not giving adequate attention to East/West Road which he said on daily basis claims lives of Niger Deltans.

Eyiba who few weeks ago threatened to go on hunger strike over the deplorable condition of the road, said if the road had been in order, the accident couldn’t have happened.

However, speaking on condition of anonymity, a top official of Civil Defence Corps, said his members took time to count both the dead which he put at exactly 230.

According to him, among those strugglying to survive who were rushed to traditional healing homes were, Okogbe 11 people, Uyakama, 12 and Ogbologbo 10.

While describing the incident as unfortunate, President Jonathan commiserated with families that lost loved ones and urged proper medical care for survivors.

“We must stop this needless loss of lives” said the Governor, who also directed that no cost must be spared to ensure the best medical attention and care for the wounded victims.

Governor Amaechi who condoled with the families of those who lost their lives in the incident at Ula-Okogbe in the Ahoada West Local Government Area of the State, also expressed regret over the avoidable tragedy.

He also advised people of the state to always be safety conscious as nothing was worth the sanctity of life.

Meanwhile, about 120 of the dead have been given mass burial near the site of the incident. The mass burial was supervised by Eze Eyiba and other traditional rulers who gave support to government officers, FRSC, NSCDCA, NEMA and other agencies on hand to evacuate victims and ensure free flow of traffic at the scene. 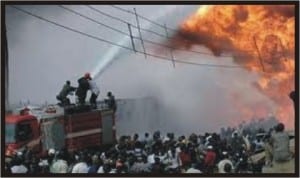 Scene of the petrol tanker fire at Okogbe in Ahoada-East Local Government Area of Rivers State which claimed the lives of 232 persons, yesterday