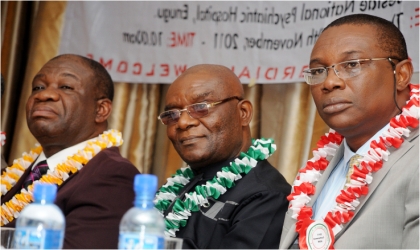 The Cross River State government and its about 22,000 workforce are said to be back on the negotiating table over payment of the N18,000 new minimum wage as there are indications that the Liyel Imoke administration is on the verge of reviewing downward the new minimum wage it started paying few months ago.

Government’s decision to review the wages of workers may not be unconnected with its dwindling resources occasioned by the drop in its revenue couple with servicing of debts incurred by the former administration on tourism and infrastructure development.

A labour leader who pleaded anonymity for fear of victimisation told The Tide at the Governor’s Office, Calabar, yesterday that the state government had allegedly set in motion a machinery to reduce the new minimum wage to N10,000.

Sources said the labour leaders were invited to Government House to dialogue with the state government on how this could be realised without workers resisting it as they are already enjoying the new minimum wage introduced by the Federal Government.

The labour leader said the meeting was chaired by the Deputy Governor of the state, Mr. Efiok Cobham, where government’s plan was fully revealed but the unionists denounced the move, describing it as wicked and capable of disrupting the industrial peace being enjoyed in the state.

At the end of the meeting, negotiators from labour were seen coming out of the office of the deputy governor but Mr. Cobham could not be reached for comments nor did the state government issue any statement on it. The matter appears to be a top secret for now.

He said both the Nigeria Labour Congress (NLC) and the Trade Union Congress (TUC) were ready to exploit all options available to resist the planned reduction of the N18,000 minimum wage.

“How can this be possible? Government commenced payment of the N18, 000 new minimum wage in August and now wants to review it downward when every worker now makes his or her budget based on the new pay”, the trade unionist said.

According to him, “this can not be possible and we have told government our mind. In order not to incur our wrath, government should forget the idea in its entirety”.

He maintained that it was unheard of in any place in the world to increase the salary of workers for one month only to start negotiations the following month for its downward review, and advised government to drop the plan in view of the high cost of living in the country.

The state government’s inability to promptly pay the new minimum wage is evident in the payment of workers salary now in arrears. October salary is yet to be paid almost two weeks into the new month.