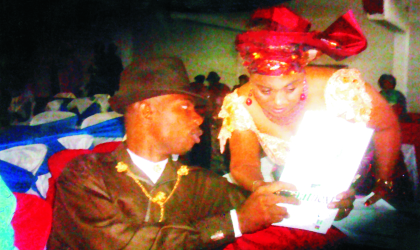 President, Ijaw Youth Council (IYC), Miabiye Kuromiema, presenting some documents to the Master of Ceremony, Mrs Hilda Dokubo, during the inaugural ceremony of the IYC at the Diete-Spiff Civic Centre, Port Harcourt, yesterday.

As the 14-day ultimatum the electricity workers issued the Federal Government expires today, Nigerians are apprehensive of what would be left of the already poor power supply situation should the aggrieved workers make good their threat of embarking on a nation-wide industrial action.

The workers under the aegis of the Senior Staff Association of Electricity and Allied Companies (SSAEAC) and the National Union of Electricity Employees (NUEE) had threatened to shut down all power stations in the country if government fails to meet their demands.

In their threat notice signed by SSAEAC’s President, Mr Bede Opara and NUEE’s Secretary-General, Mr Joe Ajaero, the workers maintained that “if by July 25, the government and the management of PHCN fail to address all the three issues, we will shut down electricity supply nationwide.”

The workers are demanding for the payment of 150 per cent salary increase negotiated with their employer.

They are also pressing for regularization of the appointment of over 10,000 casual workers engaged by PHCN, amongst other demands.

The electricity works had expressed their fear that if their welfare demands were not met before the privatization process of the company (PHCN) by the Federal Government, it might be more difficult to get justice.

In the past, the workers had initiated strike moves which were averted with the intervention of the Federal Government.

An official of NUEE, Rivers State chapter who pleaded anonymity in an interview with The Tide On Sunday in Port Harcourt over the weekend said “there is no going back on the union’s stand. Monday means action and we are set for indefinite strike because enough should be enough.”

Reacting to the situation, Mr Paul Benson who resides in Port Harcourt appealed to the Federal Government to take necessary measures to avert the looming strike.

He also pleaded with the aggrieved workers to consider the fate of the helpless masses in their agitation because “when two elephants fight, it is the grass that suffers. In this case, we the masses are the grasses.”

Also speaking in similar vein, Mrs Oluchi Jaja remarked, “When electricity workers embarked on strike, it means total darkness to poor masses who can’t afford generators or the fuel to run them. But to the big Nigerians, the strike may not mean much,” and pleaded with the workers not to increase the sufferings of the masses by shutting down power stations.