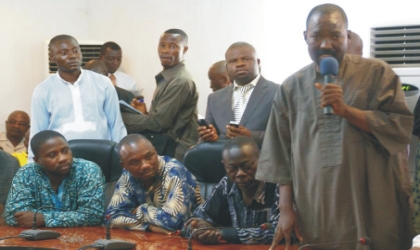 The Chairman of Lagos State Council of the Nigeria Union of Journalists, Mr Wahab Oba, and three other journalists with their driver, who were kidnapped a week ago, in Abia State have regained their freedom.

The victims said that they regained their freedom in the early hours of yesterday at Ukpakiri in Obingwa Local Government Area of the state.

Narrating their ordeal to newsmen at the Police Headquarters, Umuahia, Oba and the others said their abductors took them to a market square where they were abandoned between 1.30 a.m. and 2 a.m. and that they had to wait till 6.00 a.m. “and we were there until the police came and rescued us.

“They collected all our personal effects, including laptops, wrist watches and the sum of N3 million and even shared the money in our presence,” he said.

Oba said that they were fed on bread once a day but that at a time they declared a fast “and they asked us if we were fasting against them. They were not after our money but that of government. The kidnappers action, according to them was a form of protest against bad governance in Abia State and accused the state government of diverting the money the Federal Government released for amnesty.

“They told us that they were giving the state government one month to either complete the amnesty programme or face their wrath and that they will come out openly to shoot at people,” he said.

Wahab said that the hoodlums accused the government of insensitivity to the plight of residents of the state and threatened to disrupt the 2011 general elections.

Mr Silver Okereke, a Daily Champion correspondent, said that at a point the kidnappers blindfolded them and took them to a point they were to be slaughtered, adding that the experience in the hands of the kidnappers was a sad one.

Okereke would not say whether government paid any money before they were released but said that the hoodlums had the best of communication networking, adding that all the information that transpired in the course of their captivity were at the finger-tips of the kidnappers.

Meanwhile, Abia Commissioner of Police Mr Jonathan Johnson declined comments, saying that the Inspector General of Police would soon be in Umuahia to address journalists on the issue.

Disowning The Political Jobbers …You Are On Your Own – Arewa Youths