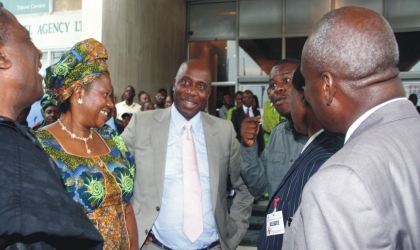 The Rivers State Government says it has received a total of N160.4 billion as Revenue from both the Federal Account and Internally Generated Revenue within the last five months of this year.

Governor Chibuike Rotimi Amaechi, who announced this yesterday at a special stakeholders meeting of the state, hosted at the site of the new Model Secondary School, Ebubu in Eleme Local Government Area of the state, said out of the above figure N83 billion came from Federation Account, while N21 billion was gotten from Internally Generated Revenue and N54 billion from Other Sources.

According to him, the state expenditure profile within the period was only N123 billion which includes N93.7 billion for capital receipts, while recurrent expenditure gulped only N29.7 billion.

He explained that workers’ salaries and pensions have increased from the N2.5 billion he met on assumption of office to about N5.8 billion, as a result of the implementation of the 15 per cent salary increment and employment of 200 medical doctors, as well as 200 nurses and midwives, to meet the medical needs of the people.

He noted that for the first time in the history of the state, internally generated revenue has risen tremendously due to the pressure mounted on Skye Bank Plc, with the amount hitting N6 billion in March, the highest so far realised.

“We knew that the problem of the state was basically education, the state of our quality of education was abysmal and we knew that the quality can only improve if we take over primary education”, the governor emphasised, as he expressed concern over what local government councils were doing with the money meant for that.

The governor, who disclosed that he had approved the sum of N5 billion for payment of contractors handling the school projects across the state, pointed out that any local government area where the construction of the model secondary school has not started was not as a result of lack of money, but the inability of the local council to provide land for the project.

Governor Amaechi also hinted that government has judiciously utilised the available resources to provide basic infrastructure in the areas of roads, land reclamation, health facilities and power, pointing out that provision of potable water is also critical to the people.

Answering questions during the interactive session, Governor Amaechi said he would call for an education summit where experts in education would proffer solutions to problems envisaged in the management of the model schools to ensure effective maintenance.

Also speaking, Governor Ibrahim Shekarau of Kano State, said his experience at the stakeholders meeting was wonderful, and commended his Rivers counterpart, Governor Amaechi for his spirit of accountability.

“I feel highly fulfilled by coming here today to hear and see the dividends of democracy”, Governor Shekarau, who was a school Principal exclaimed, as he urged Governor Amaechi to build more of such schools which he described as vehicle for change.

The Kano State Governor said but for time, he would have borrowed a leaf from Amaechi by replicating the quality of schools he had seen here in his state, and urged Rivers people to continue to support the governor to do more.