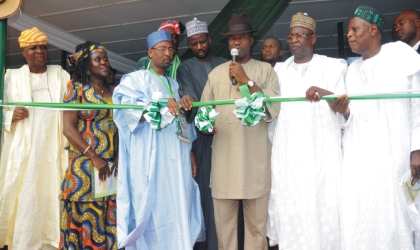 Representative of the President and Minister of Special Duties, Capt. Caleb Olubolade, rtd, (3rd left) flanked by other ministers cutting the tape to declare open the 3rd African Arts and Craft Expo (AFAC) 2010 in Abuja, yesterday.

A panel of discussants at the on-going 6th National Conference of the Nigerian Guild of Editors, yesterday in Port Harcourt advocated a development marshal plan for the Niger Delta region which alone can make-up for the years of neglect and the dispensability of oil in the near future.

Publishers of the Vanguard newspaper, Mr Sam Amuka Pemu, Mr Sam Omatseye, Malam Garuba Shehu, Mrs Dupe Ajayi, and Elder Ogua E.Itu in reaction to a paper, Rebuilding A beleaguered Region, Challenges and Prospects by Dr Ayo Teriba, were unanimous that the environmental degradation activated by oil production activities and other such human deprivation of the Niger Delta region require urgent and pragmatic steps to address.

Mr Amuka disagreed sharply with the keynote speaker who dwell principally on fiscal accruements to states in the Niger Delta and indeed Nigeria without accompanying environmental concerns, drew the attention of the conference to the spill in the gulf of Mexico and the level of concern it has generated among both Americans and indeed the cushiest worlds and said, the Mexico example is a kid’s play compared to what the people of the Niger Delta suffer daily.

The Vanguard publisher traced the agitation of the Niger Delta people to pre-independence and recalled that report of the Willink Commission which fore-warned the Nigerian government against the disturbing happening that resulted in a federal government amnesty to militants, last year.

According to the panelist, time was when Niger Delta people would take a swim in their many rivers and stream but doing so today, he said would be bathing oil, not to talk of the danger that polluted water poses to aquatic life.

She recalled the sharp drop in oil production to barely one million barrel per day during the Niger Delta unrest as against the more than two million barrels per day produced after the pronouncement of amnesty and urged the federal government to build upon the goodwill.

In his lecture, Dr Teriba had taken critical look at the Niger Delta and addressed both the opportunities and challenges and argued that although nothing in fiscal; allocations could ever be considered enough, the South-South region has been favoured considerably.

His lection which was broken into three key components, economic, finances and wellbeing , using available statistics data Teriba stated that in terms of physical and human resources, economic structure and dominance of key structures, the South-South ranks one of the highest and should naturally utilised such huge resources for good of their peoples.

On finances, Dr Teriba argued that with the high budgetary profile a strong IGR base and favourable fiscal sustainability, the South-South states should have impacted positively on the well-being of their peoples, but regretted that South-South ranks among the three poorest regions in the country.

He listed Lagos and Rivers as two biggest economies, with Lagos being the highest internal revenue generator followed by Rivers in the non-oil sector.

Earlier, one of the discussants, Elder Itu had called on states in Nigerian to help fight the now notorious monolithic culture and borrow a leaf from Lagos State which, without major oil sector earning, ranks among the highest economics in Nigeria.

At the time of going to press, President of the Movement for the Survival of Ogoni People (MOSOP), Mr Ledum Mitte was presenting his paper, Oil Exploration and the Environment. The conference continues today, with an executive session of five serving governors.