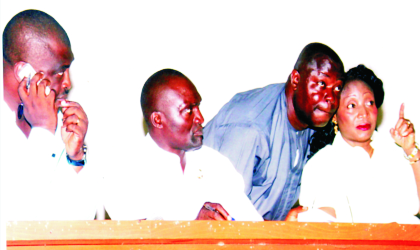 Chairman, Rivers State House of Assembly Committee On Health, Hon Irene Inimgba (right) listens to Secretary of the committee, Dr Gbara Nwiwa. With them are other members of the House, Hon Charles Nwile (2nd left) and Hon Golden Chioma, during public hearing on a bill on Rivers State Primary Healthcare Board, at the floor of the Assembly, last Friday.

The success of Dr. Goodluck Jonathan’s Presidency is a collective responsibility particularly for us, the people of the Niger Delta “, says the Governor of Delta State, Dr. Emmanuel Uduaghan.

Addressing an enlarged meeting of the Executive of the Delta State Elders Council in Warri at the weekend, the Governor said that the success or failure of Jonathan’s Presidency will not be attributed to the President alone.

According to him, as indigenes of the Niger Delta region, States of the South-South geo-political zone have a moral responsibility to support the administration of President Jonathan.

“And let me appeal that no person or group of persons should try to build a wall around the Presidency and from that wall, start dispatching stories that are not true as well as blackmailing people. If you push everybody away, it may not be to our benefit because the Presidency cannot succeed in isolation,” he added.

Governor Uduaghan affirmed that the State administration enjoyed cordial relations with President Jonathan, stressing that this dated back to when he was the Vice President of the country.

Besides, he stated that contrary to the impressions being created by some persons, the State through the active participation of himself and National Assembly members from the State, were involved in the emergence of the then vice President as acting President and President, adding that he remained unruffled by the actions of those painting negative pictures about how the President emerged.

The Governor therefore cautioned Deltans against bringing the State and the Niger Delta region to disrepute in the eyes of other Nigerians, advising that all those who truly love Mr. President should collectively work for his success as well as the betterment of the region.

On the 2010 Governorship elections, Dr. Uduaghan commended those that have indicated interest, saying that everyone has the right to aspire to contest for any office.

However, he warned that such right must be exercised within the ambit of the law in a manner that will not cause violence or breach of the peace in the State as the Government will not hesitate to deal with people that foment trouble in accordance with provisions of the law.

Earlier, the chairman of the Delta Elders Council, Chief Gabriel N. Sefia said that the Council was committed to ensuring that the Governor was re-elected for a second tenure come 2010.