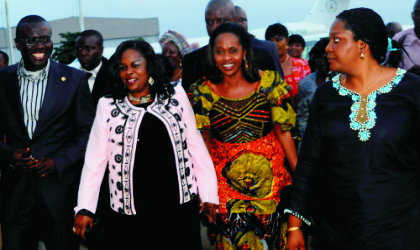 The Rivers State Government has been adjudged the best performing state in the Education sector within the South-South zone.

In recognition of this, the Federal Ministry of Education has rewarded the state with the sum of N70 million for its performance.

Governor Chibuike Amaechi, who disclosed this yesterday while briefing Journalists at Government House Port Harcourt, said 120 model primary schools have been completed across the state.

He explained that the Due Process procedure has been complied with in respect to the furnishing of the model primary schools as well as completed health centres, noting that they would be furnished soon.

Governor Amaechi also disclosed that the state government has decided to set up a project management team to monitor all government projects in the state emphasizing that the decision to set up the team was based on the need to ensure quality execution of projects as some contractors handling projects in the rural areas were not meeting standards.

Governor Amaechi, who pointed out that a lot of road projects were going on at various pace across the state, hinted that one road that was crucial to the present administration is the road from Garrison to the East West Road through Elelenwo, assuring that the state government was eager to reconstruct the road.

He further stated that the state government has paid the sum of 11 billion out of N60 billion, meant for the monorail project, explaining that government decided to run the project under Public Private Partnership {PPP) to ensure effective management.

The governor also said, as part of efforts to create employment and boost the economy of the state, government has concluded arrangement with two foreign firms to open two new oil palm farms in the state.

He explained that 60 per cent of the shares for the farms would be sold to Rivers people, and appealed to them to avail themselves of the opportunity to be part owners of the company when the shares are put for sale.

On power generation, Governor Amaechi said government has completed the Trans-Amadi Gas Turbine, and was still working on new turbines at Afam and would soon commence work on the Eleme Station, emphasizing that the present administration was determined to make sure that power gets to peoples’ houses.

The governor, who said that funds have been a major challenge to the present administration, however noted that there has been improvement in the internally generated revenue of the state being handled by Skye Bank Plc.

Responding to questions, Governor Amaechi said under its ICT Scheme, government was running a programme that would link all primary schools and health centres in the state.

In his remark, the state Chairman of the Nigeria Union of Journalists, Mr Opaka Dokubo said the union was proud to identify with the giant strides of the present administration and thanked Governor Amaechi for identifying with journalists in the state.