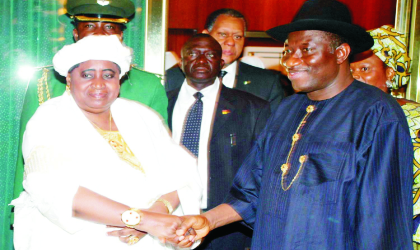 President Goodluck Jonathan has approved the appointment of Prince Solomon Soyebi as the acting Chairman of the Independent National Electoral Commission (INEC).

A statement issued, yesterday, in Abuja and signed by the INEC Secretary, Mr Abdullahi Kaugama stated that the appointment was in conformity with Section 14 (1a) of the Third Schedule of the Constitution.

It stated that the section stipulated that the INEC should be headed by a Chairman, who, among other considerations, must not be less than 50 years of age.

The statement added that Soyebi would  act pending the appointment of a substantive Chairman.

The Tide correspondent in Abuja reports that out of the three National Commissioners serving in the commission, Soyebi, who is more than 50 years, has met the constitutional requirement.

The new Acting Chairman is expected to address members of staff of the commission today.

Jonathan, had last month assured Nigerians and the international community of sweeping changes in INEC.

Answering questions about the fate of Prof Maurice Iwu, while in a visit to Washington, the American Seat of Power, the then Acting president had said, “ before 2011, there will be a number of changes in INEC.

“A number of people talk about the chairman and its not the chairman alone. The chairman’s tenure is going to expire by 13th of June, but not just him alone, but quite a number of officers, more than two thirds of them” Jonathan hinted.

The Tide, however, recalls that in what many consider an unexpected swiftness, Jonathan ordered embattled INEC chairman, Prof Maurice Iwu to embark on terminal leave with the directive to hand-over to the most senior commissioner, Mr Philip Umeadi.

The Tide learnt that most of the commissioners at the INEC national headquarters have either completed their tenure or about to do so, a reason which might have informed Jonathan’s promise to review former appointees individually before fresh appointments.

The Tide gathered exclusively that former INEC chairman Prof Iwu is not one of those being considered for the job.

Meanwhile, Nigerian President, Dr Goodluck Jonathan, and Chairman of  the Economic Community of West African States (ECOWAS), says he will do everything possible to move the organisation forward and achieve integration among member-states.

Jonathan made the pledge when he received a delegation from President Yahya Jammeh of the Gambia, at the Presidential Villa, Abuja, on Monday.

The delegation, led by the Vice President of that country, Dr Isatou Njie-Saidy, was in the country to condole with Nigeria over the death of President Umaru Yar’Adua.

Jonathan extolled the relations between the two countries, saying that they would work to strengthen such relations.

He expressed appreciation to the Government and people of the Gambia for the condolence visit.

“We are grateful to President Jammeh for his concern. When President Yar’Adua was sick Jammeh had expressed concern.

“For him to have sent you immediately shows the cordial relations between Nigeria and the Gambia,’’ he said.

Earlier, Njie-Saidy said that the delegation was in the State House to condole with Nigeria over the death of Yar’Adua.

He said the delegation also came to congratulate Jonathan on his assumption of office as President and Commander-in-Chief.

“The President expresses his condolences to the bereaved family and the entire people of Nigeria and he also sent us to congratulate you and wish you well,’’ she said.

Prayers were offered for the repose of Yar’Adua’s soul by the President of the Gambian Supreme Islamic Council, Mr Momodou Lamin Toure.