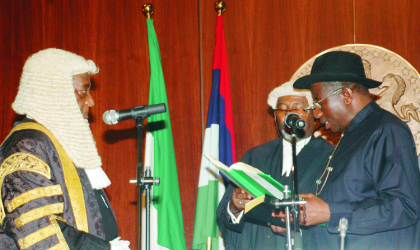 Acting President Goodluck Jonathan (right), taking his oath of office as the President of Nigeria before Chief Justice of the Federation,Justice Aloysius Katsina-Alu in Abuja, on Thursday.

Sequel to the death of President Umaru Musa Yar’Adua, the planned three-day official visit by the then Acting President, Dr Goodluck Jonathan to Rivers State  scheduled for yesterday has been postponed indefinitely.

A statement by the Chief of Staff, Government House, Hon Ezebunwo Nyesom Wike, regretted any inconveniences the postponement  may have caused the people of the state.

The statement thanked all those who had worked towards the planned visit of Dr Goodluck Jonathan to the state and sympathized with the family of president Umaru Musa Yar’Adua over his demise.

Meanwhile, Governor Chibuike Amaechi of Rivers State has described Yar’Adua as a friend of the Niger Delta people, saying his death is a huge loss to the nation and Africa at large.

“In a statement in Port Harcourt, Amaechi said Yar’Adua was a friend of the Niger Delta, especially Rivers, who made deliberate choices to change the situation in the region against all odds,’’ He said Yar’Adua’s commitment to the amnesty programme was a signal of his love and concern for the region.

Similarly, some prominent stakeholders from Rivers State have eulogized late president Yar’Adua who passed on Wednesday night in Abuja after a protracted illness.

In a telephone interview with The Tide on Thursday, they described the late Nigerian president as a man of peace and integrity.

Fromer chairman of the Rivers State council of Traditionasl Rulers and the Oba of Ogbaland, Sir Chukwemela Nnam Obi II said Yar’Adua exemplified humility and showed sincerity of purpose on assumption of office in May 2007 in the words of the traditional ruler,” he was the first president who accepted that fact that the elections that brought him to power was not flawless. And right from the time he assumed power he demonstrated a spirit of sincerity”.

The Oba of Ogbaland also said the former Nigerian leader would be remembered for displaying transparency as he reversed the controversial sale of government owned companies under  former President Olusegun Obasanjo immediately he assumed office.

Expressing shock over Yar’Adua ‘s death, President of the Movement for the Survival Of Ogoni People (MOSOP), Barrister Ledum Mitee observed that the late president showed commitment to end the crisis in the Niger Delta.

Mitee added, ‘ Yar’Adua was the first Nigerian president to publicly declare his assets and he showed tremendous humility, but the manner in which his health challenges were politicized might diminish some of his legacies”.

In similar vein, former Deputy Vice Chancellor of the state owned University of science and Technology (RSUST), Prof Bedford Fubara, however noted that with Yar’Adua’s death, the Acting President, Goodluck Jonathan would not have succession problem.

Prof Fubara stressed that the constitution was clear hence Dr Jonathan would fill in the shoes of late Yar’Adua in order not to create an impasse.

For Senior Research Fellow at the Centre for Advanced Social Science in Port Harcourt, Dr Sofiri Peterside, the Niger Delta would gain from the recent development.

Though Dr Peterside described the late head of state as a lover of rule of law and peace, he believed the political equation would change to right the wrongs perpetrated on the people of Niger Delta in the past 50 years.

Leader of the Niger Delta Peoples Volunteer Force, Alhaji Asari Dokubo said Yar’Adua’s death was painful considering the pains he had gone through during his ailment.

However, he submitted that the plight of the Niger Delta people are yet to be fully addressed, “ the demand of the people goes beyond the presidency and the individual, it’s about sovereignty, it’s about self determination”.

Meanwhile, some lawmakers from the state have expressed shock over the death of President Yar’Adua.

Deputy Speaker of the Rivers State House of Assembly, Hon Dumnamene Deekor said Yar’Adua’s death was a big blow to the nation.

The RSHA deputy speaker lauded late Yar’Adua for maintaining peace and security across the nation during his regime.

Consequently, the Action Congress in Rivers State through its leader, Prince Tonye Princewill expressed his deepest condolences to the family of the late Nigerian leader.

He noted that late Yar’Adua would be remembered for establishing the Ministry of Niger Delta and amnesty programme even though they had lapses.

In his tribute, Chief Lawrence Nwuruku, Nigeria’s Ambassador to Mexico described death of president Yar’Adua as a tragic loss not only to Nigerian, but to Africa.

Nwuruku, currently in Nigeria on vacation said in a telephone interview that Yar’Adua promoted peace and development in various African countries through support to Nigeria’s peace keeping missions.