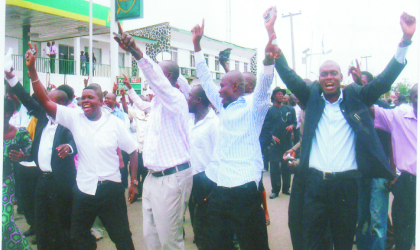 To the relief of many Rivers people, the long-drawn governorship battle in Rivers State was finally laid to rest with the dismissal of the suit filed by the gubernatorial candidate of the Accord Party, Chief Bekinbo Alalibo Soberekon by the Election Appeal Petition Tribunal on Wednesday, April 21, 2010.

The matter which originated at the emergence of Celestine Omehia after the April, 14, 2007 election was first filed at the Governorship and Legislative House Election Petition Tribunal sitting in Port Harcourt praying that the election be set aside. Due to the non-appearance of Accord Party’s counsel at the pre-hearing session the matter was on the July 18, 2007 dismissed.

Consequently, Soberekon filed an appeal at the Appeal Tribunal against the Tribunal’s refusal to set aside its dismissal order. It was during the pendancy of this suit that the Supreme Court, on the 25th of October, 2007, declared Rt. Hon. Chibuike Rotimi Amaechi the winner of the 2007 gubernatorial election in the state thereby unseating Celestine Omehia.

Based on the turn of events, the Accord Party filed on application before the Court of Appeal to substitute the name of Governor Chibuike Amaechi for Celestine Omehia. This appeal was allowed.

In spite of the willingness by the Justices to expeditiously dispense with the matter, loads of motions and incessant change of counsel by the appellant constituted a major setback.

But like other suits before it, it was finally laid to rest in favour of Governor Amaechi. Justice Kekere-Ekun declared that the appeal was incompetent, since the election petitions tribunal had no jurisdiction to entertain the application, having dismissed Soberekon’s petition on the July 18, 2007. The appeal was struck out with a cost of N30,000.00 awarded in favour of the respondent.

It would be recalled that Governor Amaechi came into power by virtue of the landmark judgment delivered by the Supreme Court on the October 25, 2007. Giving reasons for his lead judgment Ce.A. Oguntade, JSC stated that “…the name of Amaechi was not substituted as provided by law, the consequence is that he was the candidate of the PDP, for whom the party campaigned in the April, 2007 elections, not Omehia and since PDP was declared to have won the said elections, Amaechi must be deemed the candidate that won the election for the PDP. In the eyes of the law, Omehia was never a candidate in the election much less the winner. It is for this reason that I on 25/10/2007 allowed Amaechi’s appeal and dismissed the cross-appeals. I accordingly declared Amaechi the person entitled to be the Governor of Rivers State. I did not nullify the election of 14/04/2007 as I never had cause to do so for the reasons earlier given in this judgment”.

After scaling this major hurdle there seemed to be an opening of a flood-gate of suits by opposing political parties like the Sergeant Awuse led Democratic Peoples’ Party (DPP), Ashley Anyadike Emenike’s Labour Party and the one recently put paid to, the Bekinbo Soberekon’s Accord Party. Governor Amaechi also emerged victorious in a suit filed by another of his kinsman, Authur Kalagbor.

Now that the battles have been fought gallantly and won, we must not rest on our oars but rather form a common front irrespective of political and ethnic leanings to move the state to greater heights. We should not forget that we are all stakeholders and therefore count in the scheme of things. Development and growth does not rest with one person alone but is a shared responsibility.

The court room battles we have experienced do not spell doom but indicate growth and the evolution of our democracy. It is therefore counter-productive at this point to hold on to old hurts and grudges. Now that we are through with the era of motions and counter-motions, let the walls of difference and acrimony melt so we can form a common front to face our challenges as a people.