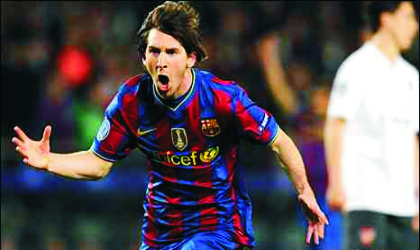 Lionel Messi scored all four goals as Barcelona thumped Arsenal 4-1 to reach the semi-finals of the Champions League at the Nou Camp.

The holders progressed 6-3 on aggregate as the Argentine scored a 21-minute first-half hat-trick before adding a late fourth after Nicklas Bendtner’s 18th minute opener.

Barcelona will now face Jose Mourinho’s Internazionale in the semi-finals while the Gunners will need to lift the Premier League title to prevent Arsene Wenger’s side from going five seasons without a trophy.

In the absence of Zlatan Ibrahiomvic, Messi played centrally and went close on two occasions inside 11 minutes to signal his intent.

A rifled diagonal drive was pushed past the post by Manuel Almunia before the 22-year-old curled a 20-yard effort just over the crossbar.

But it was the Premier League club who stunned the Catalan crowd by taking the lead on the break with their first meaningful effort on goal.

Abou Diaby bundled Gabriel Milito off the ball in the centre circle and he fed Theo Walcott on the right who squared for Bendtner. The delivery was a little behind the Dane who saw his initial effort saved by Victor Valdes but he smuggled in the rebound.

Diaby played a precision pass to bisect the Barca defence for the opener and moments later had another opportunity to put Walcott through on goal but this time his pass was cut out and soon his team had been pegged back.

Arsenal’s lead lasted just three minutes as Messi, who saw his initial pass only half cut out by Mikael Silvestre, smashed the rebound into the top corner.

Messi equalled Rivaldo’s club record of 22 goals in the competition with that stunning strike and he almost added to his tally when he toyed with Silvestre, preferred to Sol Campbell in the heart of the defence, only to fire his shot into the side netting.

The Spanish champions did take the lead on 37 minutes when an astute pass from Messi to Eric Abidal opened up the visiting defence. The centre from the left-back was cut out but Pedro flicked the ball back to the Argentine maestro who glided past Silvestre and elegantly lofted the ball over Almunia.

Arsenal were caught high up the pitch and Gael Clichy played Barca onside. Messi was clean through on goal and his finish was delicious, audaciously lifting the ball over Almunia.

And it could have been four before half-time for Messi but the man from Rosario proved to be human after all, over running the ball when bearing in on Silvestre in the Arsenal penalty area.

Barcelona tightened up after the break, mindful of the two goal lead they lost at the Emirates Stadium last Wednesday, replacing Bojan Krkic with the more defensive Yaya Toure.

But Arsenal did carve out a couple of decent opportunities.

Bendtner spurned a golden chance after Diaby played him through, a heavy touch allowing Milito to nick the ball off his toe near the penalty spot.

Wenger threw caution to the wind by sending on Emmanuel Eboue and Eduardo in the final quarter and Barca always looked likely to put some icing on the cake before Messi notched his fourth, two minutes from time.

Eboue played him onside and after holding off Vermaelen he saw initial shot saved but calmly tucked the rebound through Almunia’s legs to put his side a step closer to becoming the first side to retain the Champions League.